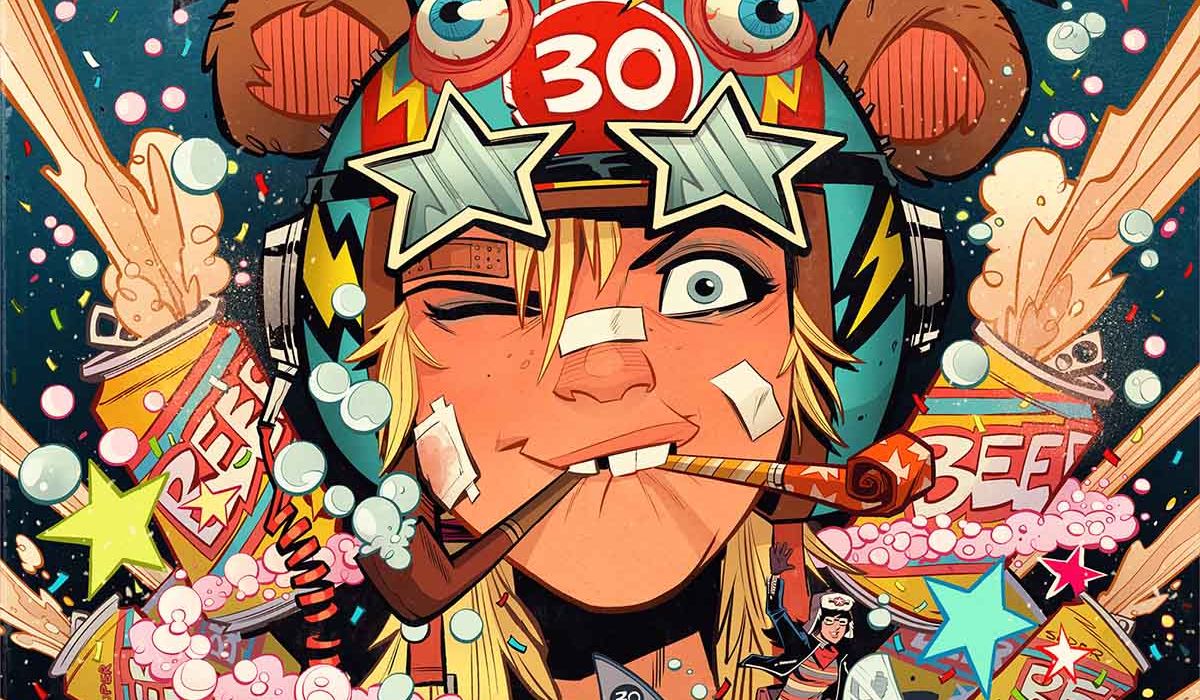 There will always be a place for post-nuclear wastelands and dystopian societies in storytelling. Comic books have featured them for decades and they are usually serious action packed adventures or depressing think pieces. “Tank Girl” has always stood apart from this. Action packed, yes, but full of quirky humor and ridiculous antics from our heroes. Original co-creator Alan Martin joins a team of artists to revisit some of what makes “Tank Girl” such a long-lasting and beloved series. Minor Spoilers Ahead 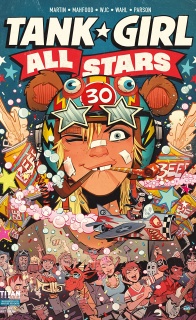 Although the start of a four-issue collection, “Tank Girl All Stars” #1 is formatted like an Annual issue from DC or Marvel. It is refreshing to get something different than your typical mini series. It celebrates 30 years of “Tank Girl,” has a slew of artists working with writer Alan Martin, and has multiple stories included.

First up is ‘Salon Tank Girl.’ Our hero finds herself without the perfect outfit for a house party. The story then takes us on a mile-a-minute blast from the past as Tank Girl gives us an ’80s style clothing change montage, running through multiple outfits from the last 30 years of issues. Full of silly callbacks and criticisms, long time fans will get a kick out of this sequence. There’s even a nod to Stranger Things, which is funny, but is a little out of place as it is the only direct nod to something set in the ’80s.

Co-creator Martin never fails to get Tank Girl’s dialogue just right. Perfectly dry and snarky, she speaks just enough to get her point across. Chris Wahl’s illustrations are beautifully crafted and capture the style that helps make this book what it is. His use of heavy lines and bright colors allows your eye to pick up on every detail from the action right in the foreground, to the smallest object way in the back; even on the most cluttered of pages. He brings a more mature ’80s and ’90s aesthetic that has been missing from recent arcs. It’s a nice quick story to bring us back into this world. It’s cute, funny and ultimately hits the mark.

From here the issue takes an odd turn, including material that does not mesh with the wacky, punk rock-absurdist style of this series. Three pages showcasing asymmetrical, painterly art and three quick poems. The poems, seemingly odes to Tank Girl’s life are too serious for a book like this. After diving right back in with the first story, these pages slow things down drastically. “Tank Girl” is a book that works best with fast paced dialogue and quick moving action that allows your eye to jump from panel to panel seamlessly. Characters’ quips need to fire off as quickly as their guns. These pages come off as too weighty and are almost enough to make you put the book down. The art, by Warwick Johnson-Caldwell is an almost Cubist take on his cartoonist style.

Picking things right back up is the featured tale of the book and will be continued in the subsequent issues. ‘Time For Tank Girl Part 1’ is an enormously fun story that throws us right into the middle of a war zone. Tank Girl, Jet Girl, Sub Girl and Booga are once again battling their oppressive government. Once the action clears, a lone wanderer is seen in the distance. At first the gang believes it to be yet another “army guy,” but as things become more clear they learn it is an indestructible mutant with murder on the brain. The mutant’s existence leads back to a chemical warfare conspiracy that could possibly be linked to one of our heroes. Recurring character Zulu Dobson returns to help the crew learn the bio-weapon’s secrets. The best portion of the entire issue; it will keep most readers engaged with a smirk on their face.

Long time “Tank Girl” collaborator Brett Parson does a great job once again. There is a reason he keeps coming back to this series. The action is explosive and tightly framed. His Pop Art, pin-up style is fun and works well with this universe. He focuses more on action and a simpler style than digging deep into gritty detail. Unlike Wahl’s work, it is more The Venture Bros. than “Transmetropolitan.” The latter is more suiting to the dystopian future featured, but that does not take away from how well Parson’s works.

Closing out the issue is one more quick poem followed by a page and a half prose story, also by Martin and illustrated by Jim Mahfood. Mahfood’s surreal style is used to set the mood, but has no bearing on the narrative. His artwork always reminds me of Ralph Steadman, which has to be his goal. ‘The Girl with the Golden Arse’ tells the aftermath of a battle in which Jet Girl and Sub Girl come to the realization that Tank Girl may have just fought and won once again, but survived for the last time. An unexpected somber send off for the character, but is well-written. It is worth reading for the quality alone.

The varied stories and styles of “Tank Girl All Stars” makes for a mostly enjoyable and energetic action romp, but a few tonal missteps and a poor jumping-on point for new readers stop this from being one of the better recent returns to “Tank Girl.”

Final Verdict: 7.0 – A decent kickoff to the mini series that seems a little unsure of what it is trying to achieve.