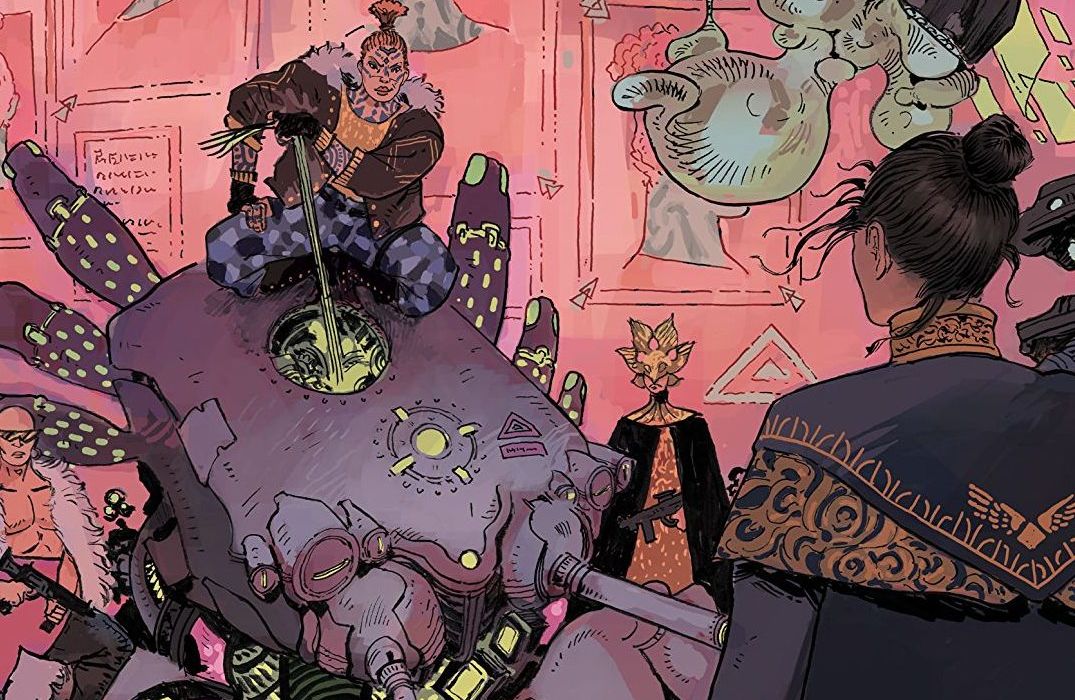 A promising young cadet named Tilde is framed for crimes against the empire after discovering her mother was the ruthless warlord of the deadly colony Tartarus, a vital player in the galactic war. Now, Tilde’s only way home may be to reclaim her mother’s dark crown. Mild Spoilers Ahead 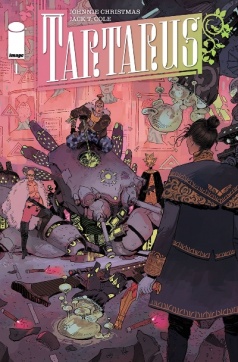 A new adventure series with all the sci-fi drama of Breaking Bad set in Mos Eisley! Promising young cadet Tilde is framed for crimes against the empire after discovering her mother was the ruthless warlord of the deadly colony Tartarus, a vital player in the galactic war. Now, Tilde’s only way home may be to reclaim her mother’s dark crown.

The first issue of Tartarus is told to us in two parts: As Above/So Below.

Below: In the far reaches of space two warring empires fight for control of their galaxy. The Baxans and the Jurians each control a quadrant with vast areas of space between them. Seventeen years ago, the murderous war criminal Surka has been captured and imprisoned at the maximum security facility known as The Pit. When an a guard stupidly tries to win her favor with a gift, she uses his ill-timed moment of affection to put her escape plan into effect. Using The Pit’s equipment, structure, and security systems against itself she is able to incite a riot, cause mass destruction to the prison, and earn her freedom.

Upon reaching the surface, the prison’s warden, some of the military and enemies within Surka’s own ranks look to take her out. During the brief moments after her escape, Surka is reunited with her infant daughter, Tilde. Seemingly killed in the ensuing battle, Surka’s daughter’s fate is uncertain as the galaxy takes advantage of this new development.

Above: Leaping ahead to present day, Tilde is an 18 year old cadet in the Baxan Empire’s military. Living and training aboard the Olympus space station, which orbits the core planet Styxx – home of the mining colony Tartarus, one of the most dangerous places in all of the Baxan Empire. Upon entering the space station, we are quickly introduced to Tilde’s day to day life and her closest friends, Klinzu and Oskan. All three teens are from different departments of the military and seem to have quite different personalities, but all found each other and are making the best of their time as they train to move up the ranks.

Planning to use her shore leave to visit her dying grandmother, Tilde mentions this to Klinzu who immediately takes great umbrage with this. Because Tilde’s grandmother is dying of a curable disease, but is too afraid of doctors or the government to do anything about it, Klinzu sees her as a conspiracy theorist hick and convinces Tilde to give a sample of her DNA to the med lab so that they can use it to cure the ailing old woman. And this is where things for Tilde turn from mundane to nightmarish. This submission of DNA leads to secrets, lies, and great peril to be unearthed and things will never be the same.

This story becomes a perfect example of the hero’s journey, in which the core character has their entire life turned on its head and they must embark on a mission to right the wrongs done to them and many others. There is a reason why it is a classic character archetype. It works nearly every time and this premiere is no different. This is a passion project for Johnnie Christmas and Jack T. Cole you really get a sense of their words and art coming together to craft this series. Christmas scripts a story that is engaging from the first page and never lets up. The first part of this issue is nearly non-stop danger, action, and anxiety inducing dread. Dropping us into this universe and dragging us on a short leash at break-neck speed through the narrative may sound painful, but it is the kind of page turning intrigue needed when you are attempting to get readers to latch on to an in depth sci-fi/fantasy story that isn’t chiseled in the pantheon of geekdom.

Christmas understands writing a story that is narrative first, setting second. This is a plot that could be tweaked every so slightly and be set at any time, any planet, any alternate dimension and it works. And understanding “Tartarus” the series as a place and not just as a place to go within the story, is what allows him to break free of being stuck simply writing a generic sci-fi adventure. This is what makes any genre fiction truly great. If you don’t care about the characters and what they are going through, then why would you care about what is going on around them?

His writing also balances the basic dialogue with exposition perfectly. Because he knows we are new to this world he is creating, he gives us just enough to help us understand this place without holding our hand. That aforementioned short leash was for pulling us through the story and action quickly, but that leash does not assume the reader is dense. The writing and art are pulling us through, and ensuring every bit of it is exposed to our eyes. This is most evident in scenes high in tension or the flat out action sequences which can mainly attributed to Jack Cole. They are breathtaking, have an incredible scale to them, both in physical and emotional ways.

Cole’s art is probably going to be hit or miss with most people. On the surface, it helps tell the story in a typical fashion. Nothing is terribly abstract, characters’ physical bodies are clearly defined, and all settings are fairly clear. His illustrations range from the work you will see in any smaller publication to things that feel a little more out of the norm and wild. It is a great blend and the look of this world, while wholly original, does have moments that feel like Blade Runner, The Fifth Element, or even something from the mind of Herbert and Heinlein like “Starship Troopers” and “Dune.” Like the story itself, the world is a delightful mixture of genres and styles. There is a clear blend of Eastern and Western styles here and it won’t be for everybody, but it feels right for this story.

Cole’s color work is intensely in depth. Nothing is left to interpretation or mediocre styling. This is a fully realized galaxy and he wants you to live in it the way he’s lived in it during is creation. It is a living, breathing place. The combination of his line and color work does have a kinship to that of Tradd Moore, but a bit more reined in than that, less psychedelic. It still has a similar fluidity to it, especially when it comes to the people.

Jim Campbell’s lettering on this book is simply brilliant. His attention to detail and the way he brings an incredible energy to onomatopoeic words is unlike most letterers in the industry. Everyone tends to overlook most letter work in comics, but when it comes swinging for the fences like Campbell tends to do, it is hard to pass it by.

“Tartarus” #1 is a beast of a premiere issue. The story spans fifty pages, with twenty eight of those pages giving us the story of Surka’s escape from The Pit. Because it tells us two complete introductions, readers will feel more than ready to jump into the next issue, as we are given enough character backstory and an understanding of this galaxy and how most of it works. This book is clearly a passion project for Christmas and Cole and their talent for storytelling is what truly makes it stand on its own. Because it is a grand sci-fi epic, there will always be comparisons to things like Star Wars, but it is an original work that may show one of its influences from time to time as most labors of love tend to do.

Final Verdict: 8.5, A expansive and exciting practice in genre-bending world building, “Tartarus” #1 is a fascinating attempt to bring what feels like an underground science fiction and fantasy saga to more mainstream comic book readers.