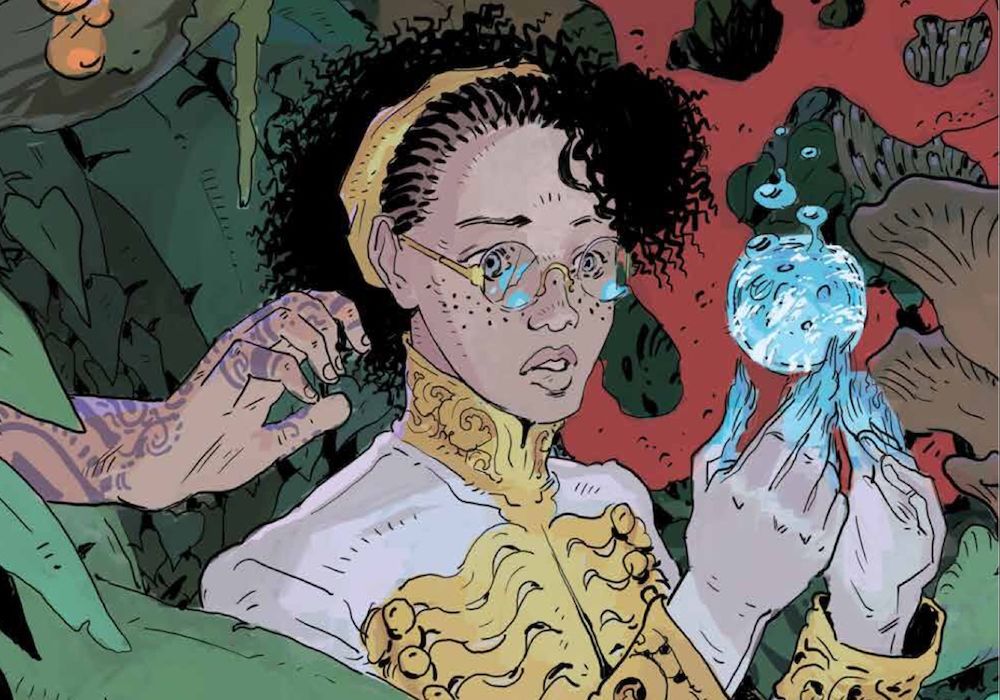 “Tartarus” #2 keeps its plot scope narrow to do some good world-building and increase tension. Warning: spoilers ahead. 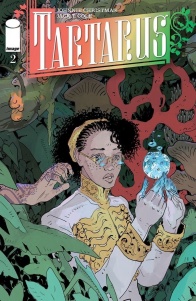 Cover by Jack T. Cole
Written by Johnnie Christmas
Illustrated by Jack T. Cole
Lettered by Jim Campbell “HOMEGOING”: Tilde’s on the run from an empire. Klinzu has a date in a war zone. Their plan, a fiery escape to the most dangerous place in the galaxy: Tartarus. Includes “LIFE,” a new backup story by STEPHANIE COOKE and MEGAN HUANG, exclusively in single issues.

“Tartarus” #2 sees Tilde on the run and Klinzu eager for a booty call. Both of these aims combine in an urgent need to get the heck out of dodge. Unsurprisingly, things don’t go too well.

Christmas and Cole restrict the plot movement in this particular issue to a very short window of time. We start with a flashback to Tilde’s younger years, and end in an explosion and a chase scene set-up for the beginning of issue #3. Comics can always jump forward or backward in time, but tracking characters in “real time” makes for an engaging, tense story, and a lot of room for world-building. Christmas and Cole have a light, integrated touch here, thankfully. “Tartarus” avoids a total info dump by blending the details into major plot machinations and assigning a lot of chatter to Klinzu, whose motor-mouth is very much in character. Everything else is delivered visually, and the comic succeeds as a result.

A perfect example of this balance in action is the scene leading up to, and including, Tilde and Klinzu’s stowing away on the funeral ship. Christmas and Cole employ lots of little touches here – from the ferry captain, whose name riffs loosely on Charon, to Klinzu’s chatter about the legends of Tartarus’s residents, to the double page spread of the rites and ritual. Inset panels across the bottom of the page add necessary detail – the gong, the priests, the drug, the followers and, finally, Tilde and Klinzu adding offerings so they can proceed. A few narrative boxes add just a bit of flavor, but the story’s told without dialogue otherwise. This allows us to soak in the vastness of “Tartarus” and its world, and while some sci-fi stories prefer to deliver their unique detail via dialogue, this book knows its main strength lies in Cole’s art.

Cole’s style is reminiscent of European comics (BDs in particular,) from line to background detail. “Tartarus” boasts a richly textured world, and the neo-Hellenic society blends elements of Napoleonic military pomp, Miyazaki-an landscapes and, most obviously, a Moebius-inspired, pastel-infused future aesthetic. Yet, “Tartarus” becomes more than the sum of its parts, and Cole’s art bursts with architectural, textural and moody details to help the book practically vibrate off the page. Cole balances cartoonishness with a relatively restrained line, and plenty of inky details in larger scenes to add just a bit of surreal dreaminess. There’s always something interesting to look at, it’s not always fully explained and the comic never feels unintentionally crowded. Character expressions can break down a little in some panels, but the overall aesthetic and execution of the book is impressive.

Part of why Cole’s art works so well is that the spareness of the inks lets the color palette out to play. Cole draws peach and purple tones through the whole book, with some scenes boasting just a few variations on one color family and others packed to the gills with rainbow hues. The military complex gets its variety from blue and green digital screens against the monotone walls, or strange machinery decked out in vibrant oranges and blues, or the eerie gilded armor of the officers. The funeral procession is an absolute riot of color after the dimmer purples of Tilde and Klinzu’s undercover journey, and Cole slowly incorporates more intense pigmentation into the mounting action toward the end of the issue. “Tartarus” is a perfect example of why colors matter in a comic: they lend depth, texture and mood, but they also help unify complex details and allow for a lingering look at the fabric of the book.

Campbell’s font choice is great, and both the balloon shape and stroke suit Cole’s line. There’s a touch of slickness here that comes out especially in some of the lettered sound effects, but it’s worth pointing out that books like this are pretty challenging. There’s a ridiculous amount of detail in each panel, and a varied palette to boot, so simple is definitely better. However, clean lettering means the book feels a bit alien or cobbled together, while heavily stylized fonts and balloons add up to visual irritation and, in some cases, a bald inability to read. Campbell does a good job here, much as he does in “Wasted Space” with Sherman and Wordie’s explosive visuals. Personally, I’ll take a sound effect or two that’s added after the art over an eye assault with an ornate font.

Overall, “Tartarus” is a visually pleasing space jaunt. It balances seriousness with humor, oddness with relatability and imagination with restraint. Klingu and other characters add some good comic relief, but the value’s in the finely textured world and the intrigue of Tilde’s true past. We get a glimpse of who she is in this issue, and I’m hooked enough to keep reading and experiencing what “Tartarus” has to offer.