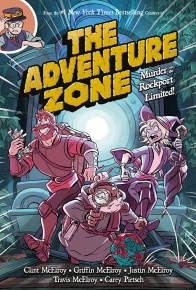 In the second Adventure Zone graphic novel (adapted from the McElroy family’s wildly popular D&D podcast), we rejoin hero-adjacent sort-of-comrades-in-arms Taako, Magnus, and Merle on a wild careen through a D&D railroad murder mystery. This installment has a little of everything: a genius child detective, an axe-wielding professional wrestler, a surly wizard, cursed magical artifacts, and a pair of meat monsters.

You know, the usual things you find on a train.

Hot on the heels of The Adventure Zone: Here There Be Gerblins, the smash hit graphic novel that launched the series, The Adventure Zone: Murder on the Rockport Limited picks up the saga where volume 1 left off. Both books are based on “The Adventure Zone,” a tabletop RPG comedy podcast with downloads numbering in the tens of millions and an army of passionately devoted fans. With art and co-adaptation from Carey Pietsch, the McElroys are once again turning their raucous freewheeling D&D campaign into some damn fine comics.

As stated in the “Gerblins” review, it’s a weird task to graphically adapt an improvised podcast. That task doesn’t get any less weird in “Rockport,” but there is at least a framework for illustrator Carey Pietsch to work within. The basic mechanics of how the book will work, with the corner-dwelling Griffin/DM, the scroll-like text boxes to identify characters and their skills, and the overall aesthetics of the world are all established in “Gerblins,” so this book can skip any sort of introductory exposition.

That’s a good thing, because there’s a lot of heavy lifting, storyline wise, to do in a relatively short time. These two stories are the first two installments of what is called the “Balance” campaign of the podcast, which features an overarching story barely hinted at in “Gerblins.” “Rockport” picks up that overarching plot from the first page of the first chapter, and throws the reader right into the thrall, with things like the Void Fish and Fantasy Costco, staples of the series from here on out, introduced in short order.

Pietsch does an admirable job fleshing out the lunar base of the Bureau of Balance, which is some of the more esoteric and least-grounded (pardon the pun) of the entire series. We all know what a train should look like; it’s much harder to establish what a moon of domed enclosures would resemble. Speaking of trains, Pietsch similarly excels at the action on the Rockport Limited itself. She nails the tone of a classic train mystery, while keeping the book firmly in the world she’s created, visually.

Therein lies the one art complaint of this book. One of the wonderful things about the podcast is that each arc of The Adventure Zone felt absolutely distinct from the other. While “Gerblins” was all caves and villages, “Rockport” was our first metropolis and a train ride through the country. By Pietsch illustrating both chapters, the world feels a little more defined than it did in a purely auditory setting. I am not, by any means, advocating for Pietsch to not continue on the series. This also isn’t to say that Pietsch’s artwork is stilted or stuck in one mode or another; it is just an observation about the nature of pinning down the visuals of a story, instead of simply letting your imagination do the work. But the consistency her work establishes also makes these incredibly lived-in characters feel even more fully formed.

Since Pietsch is collaborating with the McElroys, these books also establish a certain visual canon for the series, with characters becoming locked into certain looks. While DM Griffin is adept at describing characters when they are introduced, those visuals are rarely reinforced later. So, while Angus McDonald was once described in great detail, I quickly forgot his description, and was replaced by Pepi from The Simpsons in my head cannon.

Much like on the podcast, Angus steals the show almost as soon as he is introduced, both because it gives Griffin one of the most unique and developed characters to play, and because he’s just adorable. I’m also glad that the book didn’t tone down one of Taako’s betrayals of Angus; the black humor of the podcast is very much a part of the books.

Some of the humor, however, doesn’t get exactly adapted as merely referenced. We meet Thomas, the concierge, in the second chapter and while he bears a certain resemblance to Motel 6 ptichman/frequent Wait Wait! Don’t Tell Me panelist Tom Bodett, he’s never explicitly called Tom Bodett, the way he is on the podcast. Nor is he introduced as one of many robotic denizens of Rockport who keep the city running smoothly. It’s a weird joke, even weirder with the realization that there are dozens of him. But moments like that, improvised on the spot on the podcast, don’t always translate as well to the visual medium, and so it is discarded. For new readers, they may laugh at how Thomas will ‘leave the light on for you,’ but they’ll never know the full level of absurdity that the podcast goes into.

Ultimately, the podcast and the book have to be different things, and that’s good. There was an extended sequence cut from the book involving Merle, Taako, and Magnus landing their vehicle in a swamp that went on for a very long time because they were rolling poorly and new to Dungeons and Dragons. That would have been an interminable sequence in print (it almost was in the podcast), so you can’t lament the lack of Bodett without celebrating the lack of the Leech Fight.

Ultimately, this is the balancing act associated with adaptations of any kind. What doesn’t work in the new format is, sometimes, your favorite stuff. But for the good of the series, that stuff has to melt away and reinforce what you have here. The juicy wizard and Jess the Beheader are so wonderfully realized that, if I ever go back and listen to the podcast again, I’ll never be able to remember them the way they were. These are the definitive versions of these characters now, and that’s a testament to how simpatico Pietsch and the McElroys are.

The runaway success of both the podcast and the graphic novel signal the major shift that role playing games have experienced in the last decade or so. Speaking personally, hearing how much fun the boys had on The Adventure Zone pilot is what got me to try a tabletop RPG for the first time, and I know I’m not the only one who had that experience. The Adventure Zone, the podcast, the comic, the fan culture around it, has the opportunity to turn people onto not just RPGs, but podcasts and comics, too. It is such a lovely thing to see a game, played by a family, create such joy for quite literally hundreds of thousands of people. The comic takes that joy and gives it the most focused view of that joy yet, and it is a thing to behold.