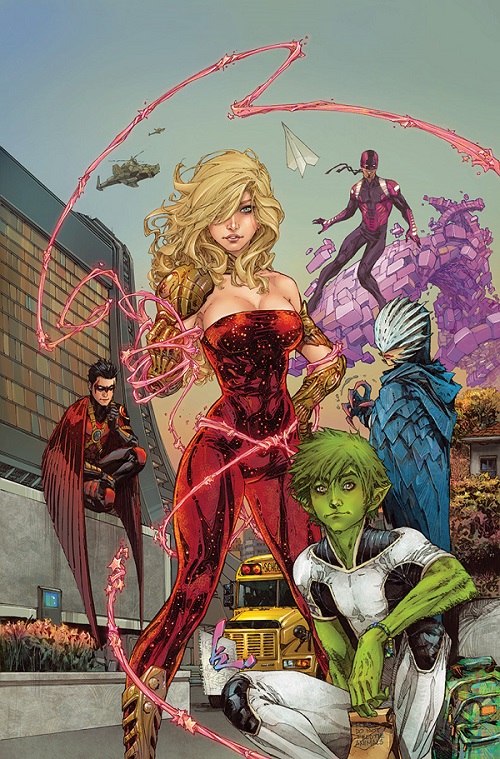 Wow, that sentence was exhausting to write. #MildSpoilers ahead! 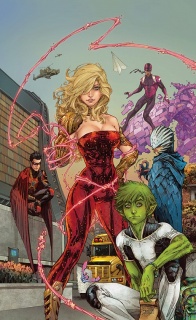 Written by Will Pfeifer
Illustrated by Kenneth Rocafort

Red Robin, Wonder Girl, Raven, Bunker and Beast Boy step out of the shadows of the adult heroes of the DC Universe to offer bold, exciting and sometime dangerous ideas on how to protect a world full of superpowered teenagers – any one of whom could be the next heroic figure or major villain!

Ever since the New 52 started, DC’s had a problem with many of its young heroes. “Static Shock”, “Blue Beetle”, and “Firestorm” didn’t last very long, several popular legacy characters were shuffled out of continuity, and Scott Lobdell’s run on “Teen Titans” was 30+ issues of SNL‘s Drunk Uncle yelling at his nieces and nephews during Thanksgiving dinner. We’ve made it past that point and things seem to be looking up for DC in regards to the #millennial demographic; “Gotham Academy” and the new “Batgirl” seem like really sincere attempts to reach out to audiences that have felt alienated by three years of DC acting like they were living in the worst version of 1994. They still have a long way to go, as is evident in Will Pfeifer and Kenneth Rocafort’s “Teen Titans” #1. It’s not a bad comic, but it’s definitely a comic that feels trapped in The New 52.

The most evident example of “Teen Titans” being held captive by the #New52 is the costumes. Beast Boy and Bunker’s costumes are alright, though Bunker really needs to lose the soul patch. Red Robin’s costume looks like he took a bet from Bruce on whether or not he could survive for two years with the world’s most impractical costume and now both parties are too embarrassed to claim the prize. Wonder Girl’s costume is a skin-tight onesie  that is hellbent on showing #datcleavage alongside some gauntlets that were meant for a Top Cow character (though the candy whip with stars in it is actually pretty cool). Finally, Raven’s costume is a sincere attempt by DC to tell Guillermo Del Toro to fuck himself.

Clearly I’m none too thrilled about the costumes in “Teen Titans,” and neither are any of the titular heroes. Every character gets up to two facial expressions, three if they’re lucky. Wonder Girl gets “smirk” and “uninterested glare”, Red Robin gets “leader”, and Raven gets “The hell is even going on with my face?” I don’t think Rocafort’s a bad artist; I’d argue that he’s great for pin-ups and covers as I do like his style, but it feels like none of the characters in this comic want to be here. They pose around in a very static series of events, which is a really unfortunate way to describe an issue-long bus chase. There are plenty of moments that should feel like big, epic moments but under Rocafort’s pen they just sort of happen. There’s one scene with Bunker that should’ve been huge for the character but there’s just this mundanity in the art that keeps it from being as significant a moment as it deserves to be.

And really, that’s the biggest crime “Teen Titans” commits. It’s not a bad comic so much as just kind of uninteresting. It’s miles better than what we were seeing under the Lobdell administration (none of the male characters take a whole page to talk about how Cassie is so hot) but there’s not too much to latch onto. You’ve already seen everything this comic has to offer but done in ways that don’t feel so listless as this comic does. At this point there’s no real reason for the characters to have anything to do with the plot at hand; they see some mysterious terrorists hijacking a bus and then stop it. Not every villain needs to be the heroes’ parents, but the lack of any connection to the peril at hand makes this issue feel like an audition reel for all the heroes involved: here’s Robin telling his teammates where to go, here’s Raven acting dark and mysterious, here’s Beast Boy turning into a tiger. It’s all stuff you’ve seen before, including the villains.

Granted, the villains are a little mysterious so I may be jumping the gun here, but one of the scientists at Star Labs is a British guy with sideburns and a goatee named “Black”. If he’s not involved with the villains to some capacity then I will be thrilled, especially because scientists kidnapping teenagers and experimenting on them has been the entirety of DC’s #youngjustice titles since the New 52 began. Also, and this may just because I run the animation column here, but ‘Blinded By the Light” might be one of the most unsubtle arc titles yet.

While a lot of “Teen Titans” feels recycled there are a few new pieces at play here as well. Bunker’s a character who I feel has always deserved better, and I think under Pfeifer his character’s going to be a lot less stereotypical than he used to be, though his speech at the end manages to sound pandering to say the least. It’s not that I don’t want to see gay characters in comics (I need more gay characters in comics), but this feels like a very stale way of going about that. I think Bunker has the potential to be the breakout character of the New 52 but  limiting his moods to “flamboyant” to “violently defending LGBQT with rehearsed speeches” really limits the character. If we get a comic where he does anything else I’ll gladly pick up every issue, but for now it’s just tiresome to see him go through the same motions.

Speaking of pandering, “Teen Titans” may not have a ton of surprises in it, but I was shocked to see how little pandering to young people there was in the comic itself, considering the cover is designed around what a maniac’s idea of Twitter is like. Inside, there’s hardly any mention of how #young and #hip these heroes are which is surprisingly unfortunate. Not only do the characters have no real reason to be here, but neither do any young heroes. This is the type of story that could be applied to any character, which makes it unfortunately generic.

The Teen Titans don’t’ really feel young as much as they just feel like any other New 52 team. They have some “#More_attitude” as the cover states (btdubs, hashtags don’t work that way) but so does everyone in a publishing line that has four titles about an evil Superman. This might be the first time a comic book would be improved by throwing in even more hashtags.

Final Verdict: 5.0 – “Teen Titans” #1 would be a pretty good comic, one that stood out, in another publishing line. Unfortunately, due to the static art and the lack of a truly #new_direction, it just feels like another New 52 title lost in the shuffle. There’s definitely room for this title to grow and improve but this first issue doesn’t make a bold an entrance as it could’ve.