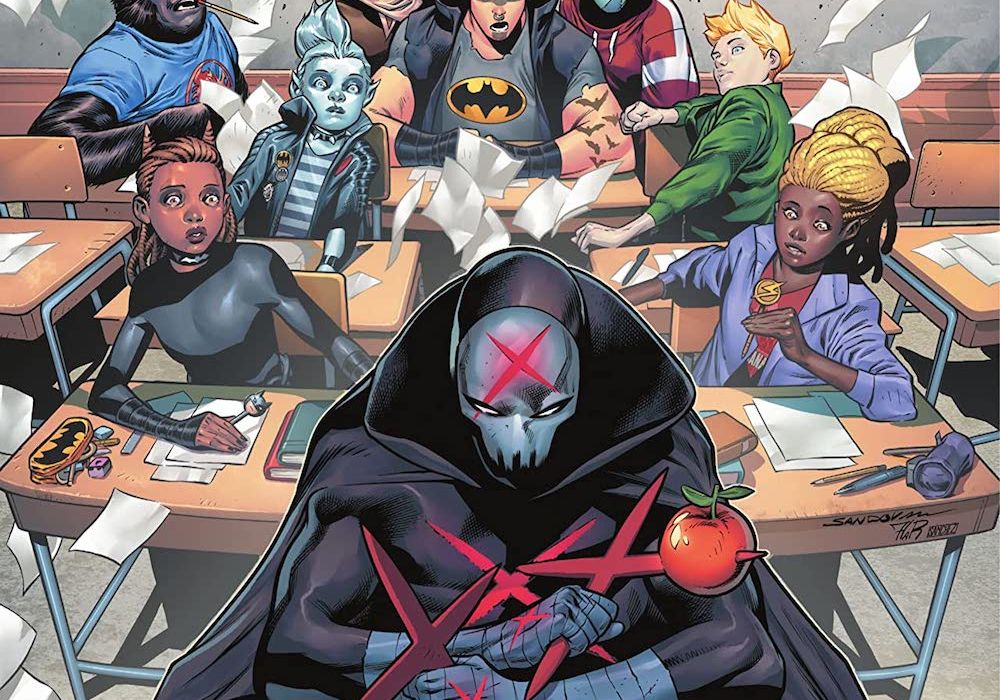 The Teen Titans represent the legacy of the DC Universe; their original purpose, back in the 1960s, was to be a team of sidekicks, all of whom one day may turn out to be DC’s greatest heroes themselves. Since then, the lineup has underwent near countless changes, but one thing has always remained at the heart of the Titans: hope for the future. “Teen Titans Academy” #1, more than almost any other single issue of “Teen Titans” across the nearly 60 years, is the most distilled version of that hope. 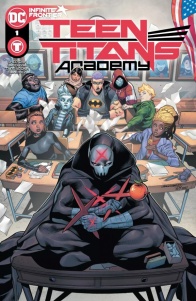 Welcome to Teen Titans Academy! Packed with both new, super-powered teens and numerous dark secrets, Teen Titans Academy’s student body includes Shazam; a new Australian speedster; a trio of Goth(am) teen expatriates obsessed with Batman-and one member of this first class will become the deadly Red X. Original New Teen Titans including Nightwing, Starfire, Raven, Cyborg, and Beast Boy take on the role of teachers and mentors for superpowered teens. Their goal: to shape the next generation of heroes.

The premise of “Teen Titans Academy” is simple: the ‘New’ Teen Titans (Nightwing, Starfire, Raven, Beast Boy, Donna Troy, and Beast Boy) have decided to start a school to train the next generation of heroes. The first stroke of genius here is that writer Tim Sheridan doesn’t dismiss the ‘current’ Teen Titans in favor of a new class; instead, those Teen Titans represent the upperclassmen of the school, while the new recruits are the freshmen. This follows perfectly with the Academy’s mission statement, to prepare these young people for the future, and allows the Titans’ legacy to continue unabated.

That also means that there is a very large cast at play here, between the faculty, the current Titans (Kid Flash, Roundhouse, Red Arrow, Crush, Bunker, and Jakeem Thunder), and the freshmen, all of whom, save two, are new characters. Those two returning characters are Billy Batson, aka Shazam, and Miguel Montez, last seen in the pages of “Dial H for Hero.” The new characters, who I truly hope we get to learn a lot about over the next few months, include Brick, someone who can take down electronics, the Bat Pack, a trio of orphans from Gotham, and Gorilla Greg, a character that’s hard not to love just based on his name. Perhaps the most visually arresting character is Stitch, a non-binary living doll who is memorable not just for their look, but also their dialogue.

All of this may seem like a lot for a first issue and, in a way, it is. But the book never feels overstuffed or rushed, only really eliciting the desire for more time with all of these characters. A big part of that desire comes from just how engaging and distinct the designs by Rafa Sandoval are. Sandoval manages to create the 10+ new characters all look distinct enough to not be confusing from the very beginning, which is sort of amazing in its own right. But more than the character designs, Sandoval does a yeoman’s task in making an issue that is mainly just introductions and making it visually interesting.

Sandoval does this by creating layouts that almost always have something going on in the background as well as the foreground. The clearest example of this is during the birthday party sequence, where Nightwing, Donna, and Cyborg are all having an important conversation that happens almost entirely behind an arm wrestling contest between two of the new recruits. Sandoval never really commits to one over the other, and in doing so, allows the conversation to not seem so staid and slow, and add some gravitas to a childish armwrestling contest. It’s a really well done pairing of script and layout, and is the clearest example of just how special Sandoval’s work is.

But he also gets to show Nightwing fight holograms and the upperclassmen fight Clock King, and both sequences do big, dumb superhero action really well. He’s a really great fit for this title.

All of this – the fighting, the part, the introductions – all is there really as window dressing to establishing the overall mystery of the title, which is the identity of Red X. Now, for those, like me, who never watched the Teen Titans animated series, Red X was a persona adopted by Dick Grayson and, eventually, by another, though who was under the mask was never revealed. Sheridan bringing Red X into the book through two instances of his visage, either as a hologram or his mask, popping up unexpectedly. We know that he is a part of this freshmen class, but that’s all we really know. Sheridan and Sandoval put Brick out there as the likely culprit, but he seems like a red herring right now, as it would be a little silly to give the readers this much of a head start on what is set to be the overarching mystery of at least the first year or so of the book.

Because of the Red X mystery, there is a sheen of terror that is just barely hanging onto the pages of this book, that takes what should be a totally fun and exciting book and gives it an edge. While it doesn’t appear that the book is going o go grimdark anytime soon, it is a nice dichotomy to have the overall sunny mission statement undercut by a potentially deadly mystery.

Final Verdict: 9.0 – A stunning debut issue that points to great things in the future.