For decades, people have argued over who is the best ninja turtle. Some gravitate to the inventive Donatello, many love the bad boy Raphael. This comic is all about Michelangelo though, in all his fun party-loving glory. Is he the best ninja turtle? Your answer might surprise you after reading this comic. 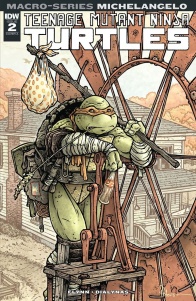 Cover by Michael Dialynas
Written by Ian Flynn
Illustrated and Colored by Michael Dialynas
Lettered by Shawn Lee
Michelangelo’s deteriorating relationship with his father, Splinter, reaches a point of no return! Will Mikey fight those he loves to save those who need him the most?

Teenage Mutant Ninja Turtles started as a unique indie comic and has snowballed into a cultural phenomenon. Thirty-four years later, the franchise shows no sign of running out of ‘turtle power’ any time soon. One of TMNT’s biggest strengths is its flexible nature. While some iterations are very similar, others have been wildly different. The turtles that premiered in 1984 were gritty, brooding vigilantes in the vein of Daredevil. The cartoon that came three years later depicted them as light hearted heroes, more focused on pizza than vengeance. The four heroes in a half-shell have practically seen and done it all. They have fought alongside the Power Rangers and Batman, starred in several blockbusters and played at Radio City Music Hall (though many fans try hard to forget the Coming Out of Their Shells tour).

The current IDW Publishing run has been absolutely fantastic. The fresh take on TMNT mixes elements and ideas from different iterations of Ninja Turtles into a cohesive and compelling narrative. It is the best of both worlds, not as dark as the original Mirage Studios run while not as wacky as the cartoons can get. While there is plenty for longtime fans to enjoy, it is just as engaging for new readers. Another plus of the current take is that it does not sacrifice characterization for plot or vice-versa. Readers can certainly appreciate that the extra-large macro-series (like the one-shot micro-series before it) allows a more in-depth look at the individual characters.

While Michelangelo is the turtle squarely in the spotlight for this issue, the enemy he faces proves just as compelling. It is none other than his former sensei and father, Master Splinter. If you dance with the devil, you’re going to get burnt. Hamato Yoshi clearly has not heeded that warning. Though Splinter’s execution of Shredder was questionable, he acted with good intentions. He was still on the side of the angels when he decided to seize control of the Foot clan. However over the past thirty-odd issues, the water’s gotten murkier. Michelangelo’s list of Splinter’s sins in this issue isn’t even complete. Yoshi made a pact with the sociopath Agent Bishop and manipulated Casey Jones into similarly seizing control of the Purple Dragons, placing him back in a toxic environment. The once sage and noble rat resembles the fallen Shredder more and more each day.

Earlier in the series, Master Splinter was a loving Sensei. Now there is no warmth in his icy demeanor. He is emotionally distant and berates his sons, more focused on his title of ‘Master’ than his role as a father. Yoshi is still willing to use that title to enforce his will and put his children in line though. In this issue, he crosses yet another line when he fights Michelangelo. The ending is bittersweet as he starts to realize just how far he’s fallen.

Now onto the mutant of the hour, the party dude himself, Michelangelo. In popular media, Michelangelo’s main purpose has been to act as comic relief. He is the source of slapstick comedy, the silly goofball and not much else. The IDW depiction is definitely more well-rounded. Ian Flynn offers a great showcase for the character in this issue, displaying both his many strengths and weaknesses.

Of the four brothers, Michelangelo is the most charming and likeable. Over the series, the personable turtle has built lasting friendships with humans, mutant and aliens alike. Michelangelo simply brings out the best in those around him. He even wins over the strict and formal Jennika, putting one or two smiles on her stoic face. Flynn also shows that Michelangelo is thoughtful and truly selfless, putting others before himself. The issue kicks off with Mikey being silly, but not without purpose. The turtle, along with Donatello and Raph, are putting on a circus act for the kids. Michelangelo points out to Jennika that the children have been displaced by the Rat King and have lost so much. While everyone else gets caught up in the logistics and planning, Mikey is focused on their well-being.

Michelangelo might very well have the strongest moral compass. In this issue, Mikey shows he is willing to stand up for what is right no matter what. He refused to join the Foot clan along with his family and when Splinter decides to train the displaced children as Foot ninja, the party dude takes a firm stand here too. He is the only turtle willing to openly defy Master Splinter and call the rat out. If doing the right thing means getting beaten to death by his own father, Mikey won’t hesitate.

On the other side of the coin, Michelangelo clearly doesn’t think things through. He was right to try and save the children from Splinter but goes about it the wrong way. He has no plan besides ‘run’. Mikey gathers up the impressionable children and hurries into the sewers, deciding to take care of dozens of them all by himself. He chooses to ‘improvise’ but is no good at it. The ninja is scrambling when Splinter and his brother catch up to him. If he didn’t miraculously manage to get through to Splinter, who knows what his next move would have been.

The art is a perfect fit for this book. Michael Dialynas draws very expressive faces. Take Splinter for example. Dialynas captures Splinter’s harsh fury as well as his heartbreak in the very last panel. His action sequences are fluid and dynamic, the final battle showing a gripping fight between two very skilled ninja. The book is all about Mikey though and the art reflects that, even in the little details. Some of the panel backgrounds are in Michelangelo’s signature orange while others have cartoon-ish effects. Of course he would stuff his sleeping bag with comics when he made his escape. The party dude himself is drawn with a dazzling smile and warm eyes, just like Mikey should have. So far, this is the best of the macro-series releases and the following need to bring their A-game if they want to top it.