You know him. You love him. The grizzled loner haunted by the twisted experiments and torture he endured. The brooding one, the bad boy of the group. One of the deadliest fighters to walk the Earth. No, not Wolverine. No, it isn’t the Winter Soldier either. It is none other than the cool but rude ninja turtle, Raphael! 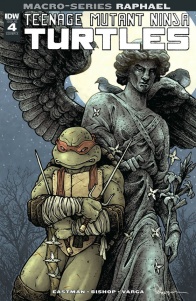 Written by Kevin Eastman & Tom Waltz
Penciled & Inked by Ben Bishop
Lettered by Shawn Lee
Colored by Tomi Varga
Raphael is pushed to his breaking point as he is separated from his brothers and forced to endure an onslaught from the nefarious Bishop unlike anything he has experienced in the past!

Seriously, not enough people talk about how Wolverine and Raphael are basically the same character. Both are rebels who chafe under authority and are deadly martial arts masters with famous tempers. Wolverine is to Cyclops as Raphael is to Leonardo. But, I digress. Logan’s hogged the spotlight in enough comics, this time Raph is the star.

Raphael goofs around with his brothers and at times can come off as a pretty easy-going mutant so it’s easy to forget he’s had it pretty hard. This isn’t the eighties cartoon version, the IDW version has been through the ringer. Shredder and the Foot Clan killed his mother. He was a fugitive for a time and then executed alongside the rest of his family. When reincarnated as a mutant turtle, Raph had to go right back to fighting. In this issue, it all starts to wear him down.

The issue opens with Raphael enjoying a quiet night with his best friend Casey Jones. When they split up, he is kidnapped by Agent Bishop and the Earth Protection Force to be further experimented on. The entire issue revolves around his allies’ (Angel, Alopex and Casey) attempted rescue as well as his attempted escape from EPF’s clutches. Throughout his escape, Raphael struggles mentally as much as he does physically. His narration and internal dialogue allows a closer look at this particular ninja turtle.

One thing I appreciate about this comic is that it shows Raphael is a very compassionate person, not as big a loner as you’d think. His time with Casey shows that they’re both very close and affectionate with one another. Angel and Alopex are willing to fight tooth and nail to get back their dear friend. This is evident in the main comic too, he absolutely dotes on his pet dinosaur, Pepperoni. A lot of his anger stems from how much he cares for others. He can’t stand to see good people mistreated.

While reflecting on his life, it is revealed that the first person to show him kindness was a blind homeless man named Buck. It was right after the mutation had first taken place and he was separated from his family. Raphael was confused and panicking when he came across the good Samaritan. Buck gave the ninja food, clothing, helped calm him and get accustomed to the strange world around him. Then, Buck was beaten to death just because he was homeless. This blatant injustice was what first lit a fire in Raphael. He then beat the thugs that killed Buck in revenge. Raphael feels this righteous fury concerning his own family too. He is more angry about his father and brothers having to put up with their enemies than he is about his own plight.

Raphael’s internal conflict is unexpected and emotionally moving. At times, across other media, Raphael seems to revel in his temper and the violence around him. That’s not the case in this continuity. He yearns for the quiet life and actually wants to be a farmer. It’s a simple dream, to grow things and add to the world. Unfortunately, that peace may always elude him. The turtle has a vision of his mother and is told that for the sake of his family, he has to be the fighter. Raphael has to be the rock they can depend on, that will always be his burden. The warrior can never just lay down and quit, even if it’s what he wants most in the world. It’s hard not to feel for him.

The plot is solid but the dialogue is detrimental in some places. The narration really sells how tired and weary Raph is but Blind Buck seems overly folksy, like something out of a cartoon. The opening interactions with Casey leave something to be desired too. The phrase “Easy peasy, chumpinski!” undercut a nice moment and was almost enough to take me out of the comic then and there. The art is great though. The spread of Raphael surrounded by EPF soldiers is a standout moment. Raph’s history is colored with vibrant oranges and reds, a fitting choice for the character. Ben Bishop makes a lot of creative choices. He shows glimpses of Raphael’s background in the water bubbles as Raph drowns. Violent bits of action are shown in glass shards as the ninja turtle bursts through a window. His expressions are good too, it’s rough watching a scared, wide-eyed Raph trying to navigate through a new world but satisfying to watch an angry Raph tear into Agent Bishop’s goons.

This comic is another satisfying character highlight that really adds to the solid IDW run. It’s a good read that gives another interesting facet to Raphael that will be nice to see moving forward.

Final Verdict: 7.0 – It’s rough being Raph in the conclusion of this macro-series.