In this issue, Aleph asks the tough questions like “have you ever made a fucking baked good in your life?” 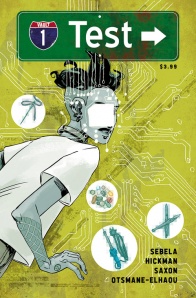 Written by Christopher Sebela
Illustrated by Jen Hickman
Colored by Harry Saxon
Lettered by Hassan Otsmane-Elahou
Aleph Null is a lot of things: An orphan, a human guinea pig undergoing medical tests for cash, a bodyhacker, a hardcore future junkie, and a corporate asset. But now, Aleph is on the run from their old life, in search of a mythical, Midwestern town named Laurelwood—where they’re test-marketing the future with tech that can’t possibly exist yet, and won’t for decades. From Eisner-nominated Chris Sebela (Crowded, High Crimes) and Jen Hickman (Moth & Whisper) comes the story of a town out of time, full of mysteries, and populated by guinea pigs in need of liberation by the misfit least likely to be their savior.

Writer Christopher Sebela employs various devices, like a running diary as internal monologue, to characterize Aleph Null as they search for the mysterious Laurelwood. While the reader gets a better understanding of their character, or perhaps lack of, by the end of “Test” #1, Sebela and the rest of the creative team give readers all they need to know about Aleph within the first two pages. You get a good idea of Aleph’s perspective with the first line of the series “What’s the thing you hate most about yourself?” It’s quiet the ice breaker, but one that opens up Aleph to begin listing off all the things they don’t care for. Judging by the list Aleph would be the winner in a game of To the Pain. The conversation, such as it is, is an awkward one and everything around it compounds that feeling. Letterer Hassan Otsmane-Elhaou employs overlapping word balloons that are just a bit too big as they try to contain Alephs often rambling sentences. Artist Jen Hickman denies the reader any sort of clear picture of either participant. Aleph is completely masked by their hoodie. The Truck Driver is a shape of body language that shows an increasing regret for this act of charity. On the first page the creative team make it abundantly clear that Aleph both doesn’t socialize. This page also establishes the characters dysmorphic self loathing of their person. Sebela’s scripting does an excellent job in this issue of articulating the point of view of Aleph and the alienation they feel in little ways, from referring to people around them as “Sapes” to the running diary monologue and how they describe what it is they can claim ownership of.

The second page is the mirror opposite of the first, as Aleph wonders the desolate nowheresville of Iowa or Nebraska – who can tell the difference really? Removed from the confines of the truck Hickman simply places them against the environment with just the weight on their back. Sebela’s writing in this page gets a little more tell than show as Mary asks Aleph some very pointed questions. I can’t tell if Mary, identified by a ‘BLOOP’ and blue text from Aleph’s phone, is a real person or a Siri like A.I. Either way their question to Aleph about seeing a movie that has received poor reviews further illuminates their tinker, hacker, ethos. In these first two pages we are shown that Aleph has some issues and that they are a bio hacker, technically a Grinder. Which is why on the third page when they declare “I’m a fucking open book,” with our first clear view of the character it reads as a honest statement. The remaining 18 pages of “Test” #1 go on to complicate that notion, calling into question Aleph’s reliability as an objective narrator. They are certainly a good storyteller.

That creeping sense of unreliability comes from several different places as we see Alph’s journey to the Midwest and how they may have murdered (or at least man slaughtered) along the way in the search of Laurelwood. As they wonder through a cornfield, with nothing but their thoughts, Aleph is confused by the sequence of events. Which came first the RV or the Pharmacy? That initial puzzlement tumbles out into a non-linear exploration of events leading up to the present moment. Sebela makes good use of non-linear storytelling in this first issue. Functionally it acts as an extension of Aleph’s schizophrenia, by which I mean actual schizophrenia not the anti-clinical post modern use of the term. As an example of that post-modern idea the issue works quiet well also. These flashes of Aleph’s quest for Laurelwood are contrasted with supposedly objective security camera footage and the file Pinnacle Lab has on their subject.
Continued below

How these non-linear elements interact to form a plot and narrative for this issue is interesting as pages and scenes can often be read backwards and forwards. After reading the issue several times I think I could construct a linear sequence of events, but like recutting Pulp Fiction, it misses how that non-linearity tells the story of Aleph and their quest.

Sebela’s script as an organizing document helps to cohere things, but Jen Hickman’s art really ties everything together and gives off the creeping unreliability. It isn’t so much the content of the panels, but how those panels are shaped. Most panels are square enough but in moments of psychic or physical distress things begin to drift and lurch to one side. For the sequence in the cornfield, Hickman pitches the panels up a little bit. Enough to be noticeable, add a smidge of energy as we see blood splatter, but not make anything unreadable. When Aleph comes crashing into the local hotel, panels are similarly thrown off kilter. The overlapping and fragmentary lettering by Hass also helps to emphasize the shock of this moment. Using panels in this way helps sell the anguish over the perceived mundanity of Laurelwood once Aleph begins to explore it and the euphoric realization when they discover they’ve found it.

Christopher Sebela coming off an excellent first arc of “Crowded” certainly helped, but it was the involvement of Jen Hickman that captured my interest first. Their work in “Moth & Whisper” and “Long Haul” both hit that idea of future sci-fi being derived from clean design with strong lines and bold colors, but with a bit of a cartoon sense to the figure work. Laurelwood isn’t the cyber punk future, yet, instead it exists in this middle state between contemporary Americana and “The Future”™ which leads to some interesting choices by Hickman and colorist Harry Saxson. Hickman’s line work is similar to “Moth & Whisper,” but a bit thinner with more of a cartoony edge and grit to things even if the environmental design looks normal. Figures and scenery get these hash marks to add some grit or texture to them, when mixed with Saxson’s washed out splotchy coloring gives the book a dilapidated “Archie” feel.

The high concept for “Test,” this Brigadoon meets The Prisoner space of test marketing sounded ripe with storytelling potential and had my curiosity. The character work in this book is what has me attention. Everything in this issue was built around articulating Aleph’s subjectivity. As a contained episodic unit of storytelling “Test” might not be the best, but as a unit that explains the character it is excellent. With Aleph and their vicissitudes established, “Test” can only add on to them as Laurelwood is explored further.