Sometimes, the simplest creations have the most complicated stories. Tetris, a game that we all know and love, is maybe the simplest ‘blockbuster’ game of all time. And yet, after you read Box Brown’s “Tetris: The Games People Play,” your head will spin, as the story weaves and changes and doubles back on itself more times than you could possibly imagine. How can a game I could explain in five words (move blocks to create lines) take 253 pages to tell the story of its creation? 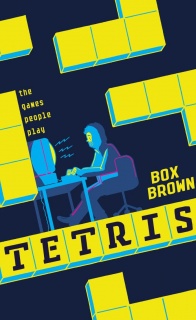 Written and Illustrated by Box Brown

It is, perhaps, the perfect video game. Simple yet addictive, Tetris delivers an irresistible, unending puzzle that has players hooked. Play it long enough and you’ll see those brightly colored geometric shapes everywhere. You’ll see them in your dreams.

Alexey Pajitnov had big ideas about games. In 1984, he created Tetris in his spare time while developing software for the Soviet government. Once Tetris emerged from behind the Iron Curtain, it was an instant hit. Nintendo, Atari, Sega—game developers big and small all wanted Tetris. A bidding war was sparked, followed by clandestine trips to Moscow, backroom deals, innumerable miscommunications, and outright theft.

In this graphic novel,New York Times–bestselling author Box Brown untangles this complex history and delves deep into the role games play in art, culture, and commerce. For the first time and in unparalleled detail, Tetris: The Games People Play tells the true story of the world’s most popular video game.

The book opens by taking the second half of its title to heart: a rumination on human life, friendship, and the purpose of gaming in our society. I don’t mean the modern understanding of gaming, where you have a console and an internet connection, I mean the concept of a game in general: what is a game? How is a game different than a competition? What role does a game play in society?

If this seems heady, it is; the book never shies away from being about more than just a game of blocks moving left to right and rotating. The book is about every aspect of Tetris: the gameplay, the creation, the cultural phenomenon it became, the legalities behind it, its legacy. I’ve been playing Tetris for over 25 years, and yet I felt like a neophyte reading this book. While I enjoyed the game immensely (I still consider it the greatest video game ever made), loved the music, and debated strategy with friends, it wasn’t until reading this book that I gave a second thought to any part of the process that brought the game to me.

Maybe part of that is bias; maybe I never really considered the game ‘art’ before, the way I consider a painting or a record a piece of art. It isn’t that I don’t consider video games legitimate entertainment or art, but Tetris, in particular, seemed to be something else entirely. Is a puzzle art? Is Tetris a puzzle?

The game certainly has a puzzling history, something that Brown highlights throughout the book. You almost need a flowchart to full appreciate the game’s path from creation to the Gameboy version that, for so many folks of my generation, defined gaming. Because of the game being created in Soviet Russia, and by a government employee, the rights to the game fell to the government, who negotiated a number of partial deals, all of which involved people trying to get not just the rights, but one up on their competition. The fact that the Gameboy version existed at all seems almost miraculous when it becomes clear just how close to death the game was on a number of occasions. Death isn’t really the right word, but the red tape and conflicting deals nearly caused the game to be a pirated, forgotten footnote to gaming history.

Brown’s pacing of the book is methodical and nuanced, taking this incredibly complex story and trying to tell it in the simplest way possible. Brown’s work is deceptively simple in almost all that he does – he boils down a story and its component parts to digestible little pieces, both visually and narratively, which allows the reader to focus on what the story is truly about. The way Brown constructs the book tells you a lot about the type of artist that he is: whole pages are sacrificed to put the spotlight on a new person or two entering the story. Instead of just adding a note indicating who a person is, they get an entire page, black except for their photo and description, to introduce them properly into the story. It is more important that the reader truly understand who the character is than anything else, and so they are presented in this monolithic way.

Brown does a great job illustrating characters that are as expressive as any in all of comics, but does so with an economy of lines that can border on Mignola-esque. There is nothing even close to an overdrawn panel in this entire book. He is a storyteller, first and foremost, and every bit of ink is in service of that story. The decision to color the book with just yellow adds to the economy on the page. There’s little that is flashy or garish in this book; the part of the book that stands out the most is just how much research Brown put in to this story.

In so many ways, only Brown could have told this story as effectively as it is told here. Tetris is a marvel of game making – something with so few moving parts can be as compelling and addictive as the most addictive story ever written. Brown’s book feels similar to that – a no frills approach to a no frills game. But that does a disservice to Brown’s talents. This is not simple in the way that a Ramones song is simple – this isn’t primal or primative. This is a well honed, meticulous meditation, with any ounce of fat trimmed off of it. The book reflects the subject matter in almost all ways, and I can think of few bigger complements to pay a non-fiction work.

Brown’s previous graphic novel, “Andre the Giant: Life and Legend” took someone larger than life and brought him down into a handheld study that humanized the oversized wrestler. “Tetris: The Games People Play” does almost the opposite: it takes something we are used to holding in our hands and taking for granted, and blows it up to unbelievable size, giving a depth and gravity to the game that could never have been assumed by the player. Brown’s ability to both shrink and enlarge shows his inimitable mastery of his medium: making the world understandable and the frivolous larger than life.

Final Verdict: 8.6 – A stunning work by a master storyteller.