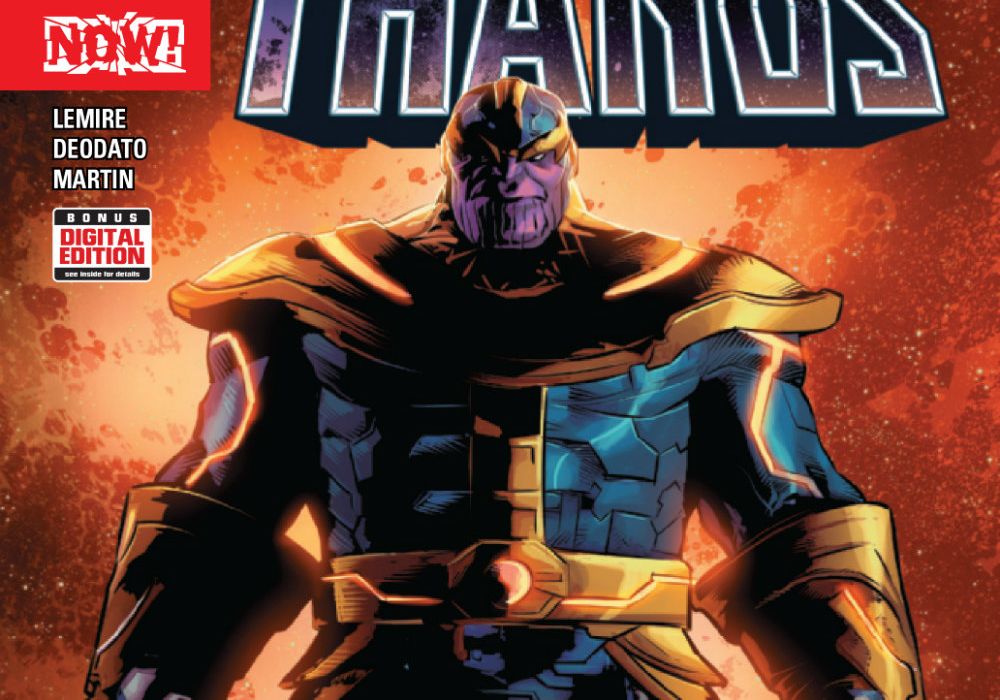 Thanos is, when written right, one of the most dangerous and intimidating bad guys in the Marvel Universe. These past few years have put Thanos to good use (with a brief exception of treating him as a mere catalyst to kick off the real conflict in “Civil War II”), due in no small part to build his hype for when the cinematic universe gets around to using him, so it’s time to take a look as a comic focuses on his return to power. 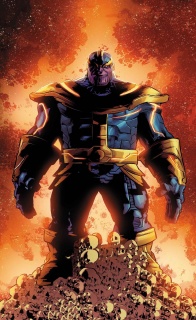 EVIL HAS BEEN UNLEASHED ON THE UNIVERSE. Thanos, possibly the most evil individual in the Marvel Universe, is back… and he’s out for vengeance on all who would oppose him. Unfortunately for the Mad Titan, he’s also heading for an unexpected reckoning… with his family. Take an ongoing walk on the dark side of the galaxy, following the deadly trail of destruction left in the wake of… THANOS!

When Thanos appeared in “Civil War II,” his appearance was unsatisfying in spite of the body count he left behind. Fortunately, it seems he’ll be back out in space after the event’s conclusion, because this comic is all about him taking back his throne. Considering this is a character who once wiped out literally half the universe, and has served as the avatar of death, that’s not a very difficult task for him.

However, what we get is less a roaring rampage of revenge and more of a quick curb-stomp of anyone who gets in his way. The comic does a fine job at showing just how dangerous Thanos is as he wordlessly tears through everything in his path. Even without dialogue or narration, the action alone tells us everything it needs to, and Thanos’s expressions alone speak just as well as his dialogue, which is used sparingly and to great effect.

Mike Deodato’s artwork does an excellent job at illustrating the action, utilizing a crimson background and silhouettes of Thanos and his victims at times, and action sequences that show tremendous impact and power at others.

Outside of action scenes, the artwork is still impressive. Every alien creature looks detailed and intimidating, the space scenes and backgrounds are lovingly drawn, and even the way the panels are laid out display a sort of artistic arrangement, often cut into symmetrical boxes or lining the sides of a larger panel. It often gives the scenes an even larger presence, and helps the scenes flow nicely.

When writing a story about a villain, there are a few choices for how the lead character is portrayed. You can try to humanize him, make him relatable, give him some flaws to overcome like you would a hero. You can show the world through his point of view, so the readers can understand what motivates him and understand his internal struggles. You can give him a greater evil to overcome. Or you can devote the issue to showing that he is the biggest, baddest, and most dangerous villain ever to grace the pages of a comic.

This issue chooses the last option. Just as Thanos is restoring his rank as the top dog, the comic reestablishes why he is a threat to be feared. The purpose is not to relate to Thanos, or cheer for him to succeed, it’s to see his power and realize just how big a powerhouse he is. It builds him up so that we know just what kind of threat the heroes face when they stand against him.

With any long-running villain, it can become a challenge to keep the readers viewing him as a serious threat. There has been times where Thanos fell into that pit, but those times are far in-between the times when he posed a legitimate threat to all of existence, and sometimes comics like this are essential to remind us of who and what he really is.

Of course, a story is incomplete without conflict, and it’s setting up conflict not only coming from Thanos, but directed towards him. Jeff Lemire brings in several characters related to Thanos on a mission to take him out. It’s no Avengers team, but it’s a band of spacefaring superpowers with the Mad Titan in their sights, which promises some great battles to come.

Interestingly, while the Anti-Thanos party includes his brother (Eros) and son (Thane), his adoptive daughter Gamora is not yet a part of the party, in spite of all the trouble she caused in the pages of “Guardians of the Galaxy” after learning he was on Earth. It seems she’ll be busy in other comics, and in spite of her and the Guardians’ long history with Thanos, they may be benched for this story.

Yet there is no story without struggle. So how does Thanos get obstacles to overcome when he can restore himself to power so easily? Without spoilers, the comic sets up a small vulnerability, a possible way that Thanos could lose. But will he? Perhaps a better question is: would he want to? Can Thanos die, and if so, will it unite him with his one love, Death herself? These are all questions that the comic may answer in due time, and given the great beginning it offers, I look forward to seeing how the answers unfold.

Final Verdict: 8.9 – A very good start, with great writing, pacing, and artwork. Thanos is back, and he’s a force to be reckoned with once again.