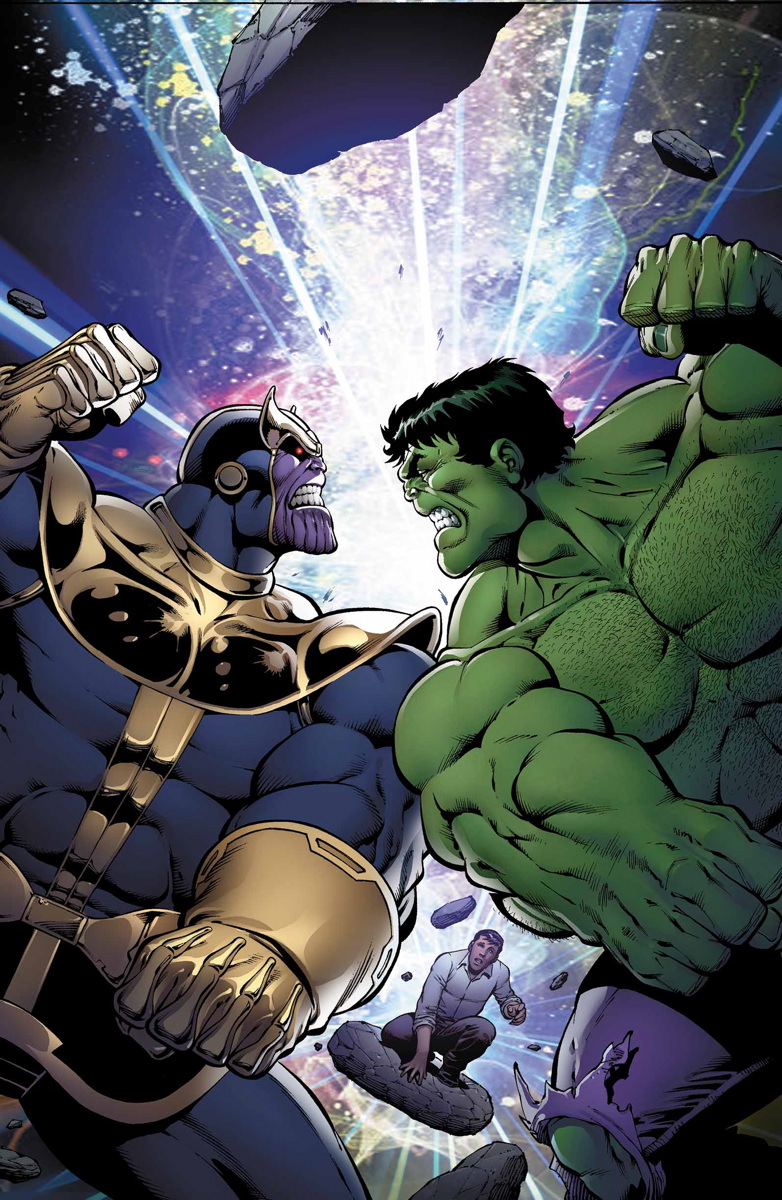 With “Thanos vs. Hulk”, Jim Starlin continues to revel in the recent renaissance of Thanos. Thanossance? No, that wasn’t even worth the effort. Read on for our spoiler-free review of “Thanos vs. Hulk” #1! 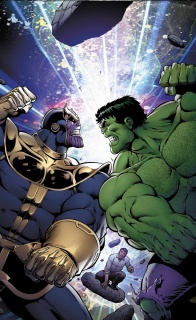 Written and Illustrated by Jim Starlin

• An all-new four-part story by fan-favorite Jim Starlin begins here!
• The Hulk is kidnapped by Pip the Troll and traded to Annihilus!
• Then Thanos of Titan gets thrown into the mix…

Jim Starlin is undoubtedly one of the most influential creators in comics, especially if the recent boom of Marvel’s cosmic books are any indication. Yet, even though he’s responsible for helping craft one of the richest corners of the Marvel Universe, Starlin hasn’t adapted nearly as well to modern comic sensibilities as Thanos, Gamora, or Drax have. When he releases a comic nowadays, like “Thanos vs. Hulk”, it’s noticeably different from everything else Marvel’s publishing; sticking out like a sore thumb.

This is most apparent in “Thanos vs. Hulk” #1’s opening scenes, where Tony Stark and Maria Hill stand around, posing and spouting one-liners like they’re being directed at gunpoint by Garth Marenghi. Draping her arm around Stark’s shoulder, Hill checks out the files on Pip the Troll – who we are always grateful to see – and says to Stark “I know this isn’t going to look terrific on the ol’ resume.”

Honest to god, I thought Tony was going to tell Maria to cool it or she’d get a knuckle sandwich. The opening to “Thanos vs. Hulk” is rough. Unbelievably rough. Jim Starlin should not be allowed near any character created post-1980 and those first few pages are reason why. In fact, I was ready to just phone in my review and make Garth Marenghi references for a thousand words (which I honestly might still do). Then, something miraculous happened. The story left Earth and took on a completely different tonal shift. In the deep reaches of space, with a hairy chested Hulk surrounded by characters named BLASTAAR and ANNIHILUS looking to abduct him for REASONS, Jim Starlin found his voice.

Starlin has a gift for language that’s the definition of a double-edged sword. In (relatively) mundane settings like the SHIELD Helicarrier, Starlin’s grand language sounds utterly ridiculous, like The Thrilling Adventure Hour but with a sad sense of sincerity. But when Starlin builds himself a greater setting, one full of aliens, trolls, and cerebral battlegrounds, his language becomes some of the most powerful wordsmithing in comics. It’s Shakespeare, really. When you have an actor reciting “To be or not to be” and just sort of trying to get through it, the words sound like nonsense. But when you have a great performer who can lift up the language and grant it the high stakes it deserves, you begin to understand why so many people consider Hamlet to be the best play of all time.

Thankfully, Starlin doesn’t have to look too far for an actor to share his lines as his own art still contains the same sense of size and scale it did in the old days. Thanos’s spaceship isn’t hanging out in deep space, it’s coming at you like the Imperial Destroyer in A New Hope. Blastaar doesn’t repot to his master, he calls out for THE MASTER OF ALL THERE IS whose shadow looms from the castle hallway that is on this spaceship for some insane reason. Characters here aren’t the relatable mess-ups you see in a Joss Whedon adaptation, they’re archetypes writ large. Big sweeping gods and monsters fighting across the galaxy.

That said, Starlin’s art occasionally loses some of the size which makes for some distracting panels. Right after Annihilus’s big SHADOW IN THE HALLWAY moment, he’s nonchalantly presented in the four foot Kid Annihilus body he’s been rocking for a few years now. Right after Thanos’s massive body LOOMS OVER PIP THE TROLL AND CORVUS GLAIVE, he’s then shown just sitting in his chair all chill. Moments like these don’t distract from the story too much but they do break from the rhythm Starlin works so hard to build.

If you’re the type of comic book fan who cut their teeth on “The Infinity Gauntlet” or can appreciate some retro cosmic Marvel, then you’re the type of audience “Thanos vs. Hulk” #1 is meant for. It’s a total aberrance in the current Marvel framework of books, almost all of which are self-aware in ways Starlin could never be. Hell, Jonathan Hickman’s work on the Avengers books are the closest spiritual successor to Starlin’s work – Hickman’s creations even find their way here – but they never surrender themselves to the greater cosmos in the way Starlin does.

Final Verdict: 7.2 – “Thanos vs. Hulk” #1 is a great book for fans of Starlin and his take on Thanos and the star bound side of Marvel. But, like much of Starlin’s contemporary work, it might struggle to find its way in the current comics market.