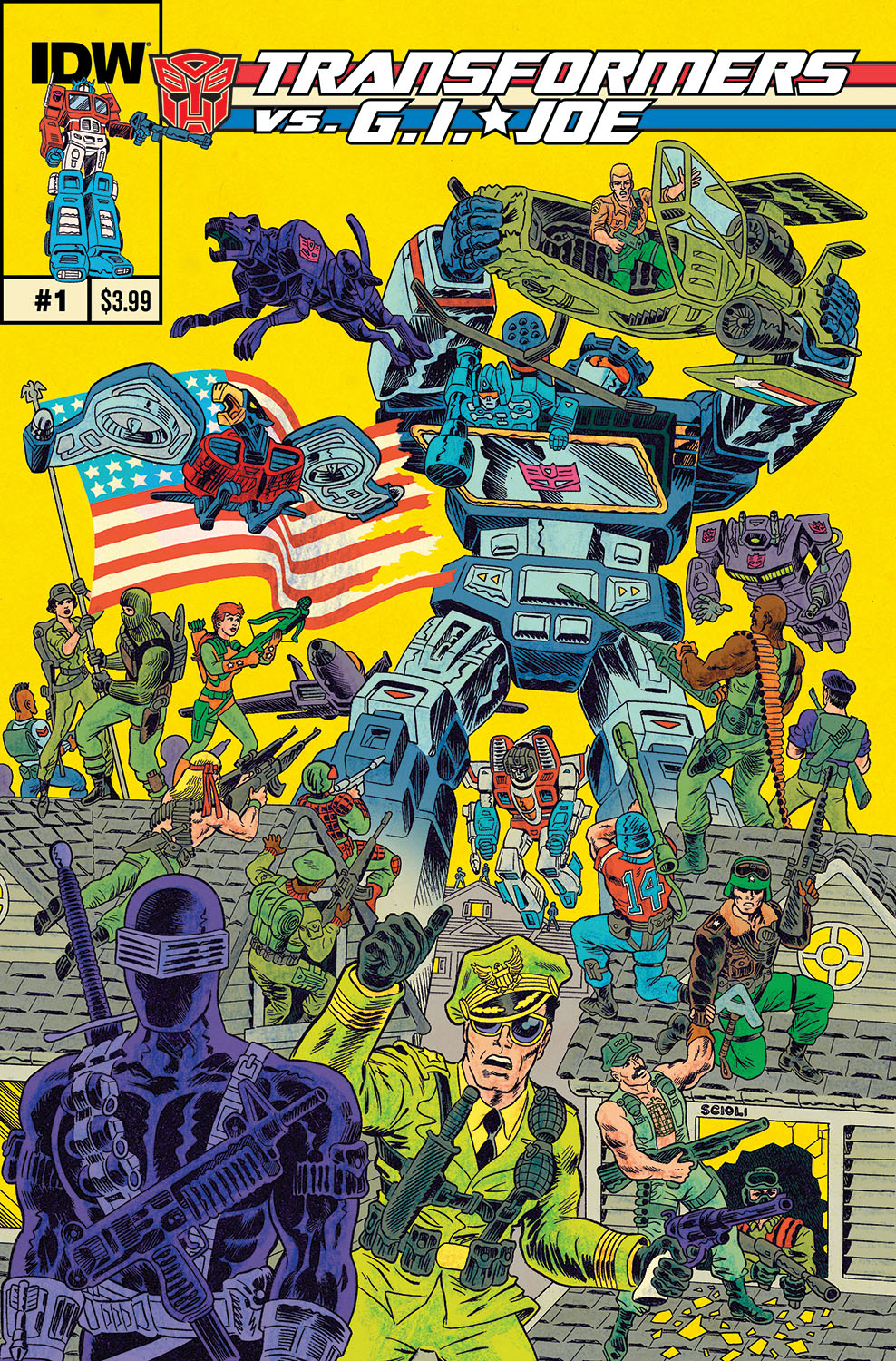 The Transformers and GI Joe franchises cross over in our newest contender for Craziest Comic of the Year. Read our review below! Mild spoilers ahead! 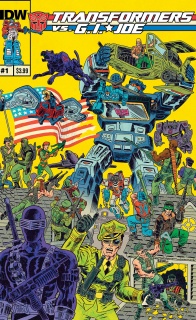 SPACE WAR I! Earth makes contact with an alien race—and G.I. JOE is on the front lines of first contact! But when the TRANSFORMERS arrive—their version of “peace” does not match our own…

G.I. Joe and Transformers are very serious properties. They’ve long shed their childish roots to become very gritty and significant films like Age of Extinction or that movie where Channing Tatum died in the first minute. Yes, G.I. Joe and Transformers in recent years have gained increased notoriety as they’ve adapted to the 21st century, an era that calls for more nuance, more “realism”.

“Transformers Vs. G.I. Joe” could not care less what the 21st century wants.  Instead, it delivers what America needs. And if you’re from a foreign country then brace yourself because Tom Scioli and John Barber are about to colonize your ass.

Okay, “Transformers vs. G.I. Joe” #1 isn’t exactly “American”, at least not in the xenophobic Modern Warfare sense. No, “TvG” carries within it the type of patriotism that’ll make any man, woman, or child rise up and defend whatever county has the best initials to shout (hint: It’s USA. It’s always USA.) Set against this era of obnoxiously “complex” plots and forced realism, “TvG” harkens back to the classic Larry Hama era of “G.I. Joe” and Budianksy’s run on “Transformers” in the 80’s, noticeably in Scioli’s Steranko-infleunced art. Set in a new continuity that straddles the line between the classic 80’s runs of both titles, “TvG” finds the Joes, under the leadership of obscure character and utter fucking champion General Lawrence J. Flagg, making first contact with some Decepticons who have arrived on Earth due to Cybertron being literally a couple miles up in the sky.

The plot itself is mostly a set-up for what’s to come in the following issues. The major conflicts are actually a distraction for the secondary plan to be put into play. More often than not, cross-overs usually have the weirder property “invading” the more down-to-Earth franchise but, without spoiling too much, Scioli and Barber are looking to shake that formula up with this issue’s ending. That’ll surely lead to some wild events, but it’s important to note “TvG” #1 doesn’t feel like build-up. The actual premise that’ll navigate the series isn’t a cheap curtain pull that invalidates the preceding story but instead proves that this is hardly a story with one level. Instead, the action in this series will only continue to elevate until the sheer radness of “TvG”.

Verbally describing the action in “Transformers vs. G.I. Joe” would be a disservice to the story. Tom Scioli is a master in visual storytelling and it’s never been more apparent here. Some younger readers may be put off by the book’s retro feel, but that aesthetic allows for Scioli to craft a non-stop series of explosive set pieces that play much smarter than you would think. These are pages here that would make Steranko lose his damn mind. Again, describing this scene in words doesn’t do justice to how its presented in the comic so I feel safe saying that knowledge of this set piece won’t ruin the experience. That said, the splash page where three Joes jump out from the inside of a Decepticon and land on a pterodactyl while a robot panther screams at them just stole my girlfriend’s spot in the Top 5 Favorite Things about my life. Set pieces like that are ever-constant in “TvG”, yet never feel old. There are some truly inventive moments here, with “Operation: Coltonbolt” and “A Face for a Face” becoming instant classic moments in their own right, especially since the countdown for Coltonbolt runs throughout the two other moments I described, another Steranko-style choice that Scioli makes all his own through colorful blocked numbering that makes this comic all the more vibrant. And I’d also like to just point out, even though I’ve name dropped Steranko a dozen times since this article started, Scioli’s art doesn’t feel derivative of Steranko or his other main influence, Kirby. Instead, those two influences have combined with Scioli’s own sensibilities to create some high-octane visual storytelling I’ve never really seen before.

There’s a lot to be found outside the visuals in “TvG” too. General Flagg is a fountain of one-liners, as is essentially every character, none of whom are really dumbed down for the sake of easy storytelling. The jokes are smart too, with a specific shout-out needing to be made to when Dial Tone compares the three Decepticons to Columbus’s three ships only for the Native American Spirit Iron-Knife replying with “That is one B-A-A-A-AD comparison.” I wish I could list all my favorite lines but I’ve been told that I’m not allowed to jut reprint the entire comic here. C’est la vie. At the very least, it should be noted how “TvG” does an excellent job in combining the classic, more basic style of dialogue with some truly great jokes. And even then, none of the jokes derail the plot, as the large moments still feel like justifiably epic ones.

I could go on and on about “Transformers vs. G.I. Joe” forever but this article needs to get published at some point. If there’s one thing that I hope conveys how enjoyable this comic is, I’ve never been a fan of G.I. Joe or Transformers. I’m one of those dirty millennials who never really got the appeal of either franchise. But now? I have seen the light.

And that light is the flare from a thousand Americans with stupid code names firing missiles at robot/animal/car hybrids who may or may not team up with a terrorist organization whose only goal is snakes.

Final Verdict: 9.8 – Ignore literally anything Hendo says in his “Storm” review. This is the Pick of the Week. Also don’t tell Hendo I wrote any of this last part.