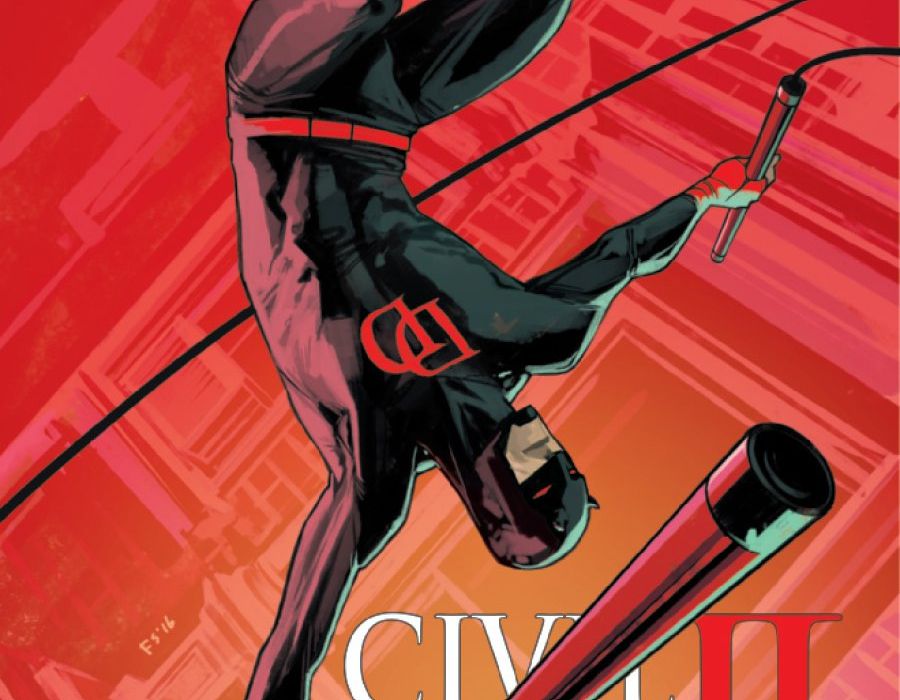 With Bruce Banner dead and buried, a verdict has to be reached for his killer, the former Avenger Hawkeye. But when Matt Murdock AKA Daredevil gets called in to be Clint’s prosecutor can he ensure a fair trial for his former friend? And if not, can he make sure the forces conspiring against Clint won’t bring them both down? Check out our review below and watch out for spoilers! 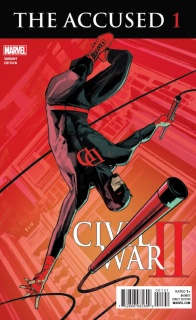 In case you haven’t been reading our recap series for “Civil War II”, we’re not exactly the biggest fans of Marvel’s latest crossover. A lot of the conflicts tearing the Marvel Universe come off as naturally one-sided (Should we use a new Inhumans’ powers to detect when Thanos or a Celestial are going to invade? Duh.) One of the most blatant one-sided arguments comes from that time when Hawkeye killed Bruce Banner after the Avengers confronted him with a vision of The Hulk killing them all. It was a sucky move, but Beast pulling up a video tape where Bruce Banner says “Hey guys, Clint should absolutely kill me don’t worry about!” kind of removed any sense of drama or nuance from the moment. It’s hard to mourn Bruce Banner or hate Clint when A) he hasn’t shown up in comics for roughly a year and B) Clint was specifically told to kill Banner and was given a special arrow for it and everything. Before we can really think about it, Tony and Carol have moved on to the next thing to yell at each other about.

Thankfully, Mark Guggenheim, Ramon Bachs, & Garry Brown dig deep into Hawkeye’s “Trial of the Century” in a way that highlights future threats to the Marvel Universe while painting shades of grey over our favorite heroes. Matt Murdock’s a great attorney, something I wish the Netflix show would delve into more than it already has. So when he gets called into prosecute Hawkeye for Bruce Banner’s murder, he’s not pulling any punches. “I have only one job here,” he tells Clint, “and that is to make certain your life ends at the point of a needle.”

Unfortunately for Clint, the trial goes exceedingly well for Daredevil. Almost too well. Matt picks up on how the Department of Justice agent seems a little too intent on making sure Hawkeye gets convicted. Matt’s not comfortable with this, especially when he discovers the political landmine the Department of Justice plans to set off with Hawkeye’s incarceration. It’s hard to say why without giving it away, but this comic which is more or less a legal drama ends up feeling like it has more stakes than the crossover comic where aliens are predicting the future and characters are getting knocked off left and right. There’s a real danger present in either of Hawkeye’s potential verdicts and it’s up to Matt to figure out how to best proceed with the trial now that his benefactors have shown their hand.

That’s not to say this is the kind of case where Hawkeye gets off no problem because he has people conspiring against him. No, if anything Murdock’s cross-examination just damns him further. You know how it looked like a freak accident, a moment of panic, when Hawkeye killed Banner? Hawkeye had apparently had the gamma arrow pointed at Banner the moment he walked out into the open. Sure, Hawkeye says he saw the green go off in the Hulk’s eyes but Murdock points out that Karnak was present and he didn’t see anything in the eyes with his own detection powers. In just one issue, “The Accused” has added so much drama to a puzzle piece in the “Civil War II” crossover that looked like it wasn’t going to get much attention.

The ambiguity in Clint’s trial is reflected in the art which features the kind of shadows you’d expect from a courtroom bogged down by conspiracies. It works really well when Daredevil’s climbing through offices trying to find out who’s using him, but the way the courtroom still stays dark during the day is a nice if not very subtle remidnder of how messed up the trial is at its very foundation. Plus, the pacing of the panels (like the introductory shot of Hawkeye in an arrow shaped panel or the montage of Matt crushing Clint’s defense) keep the book moving along so it doesn’t drag. That said, I’m not a huge fan of what I’m going to call the book’s sketchbook style. It doesn’t just vibe right for me for what’s more or less a realistic (as realistic as superheroes get) courtroom drama.

Final Verdict: 7.4 – Is “The Accused” necessary to understand all of “Civil War II”? Probably not. There’s a a huge chance that this issue’s big development might not get followed up on in the future. And to be honest, it’s not the kind of thing that needs to get shoehorned into the end of “Civil War II” at the last moment. That said, “The Accused” does a lot to add more to the “Civil War II” story, adding a ton of details that actually make this rift between the Avengers feel like an actual clash in morals. As far as crossover tie-ins go, “The Accused” hits that sweet spot of adding just enough to make the main story feel special without you needing to read it to understand the actual event on a base level.