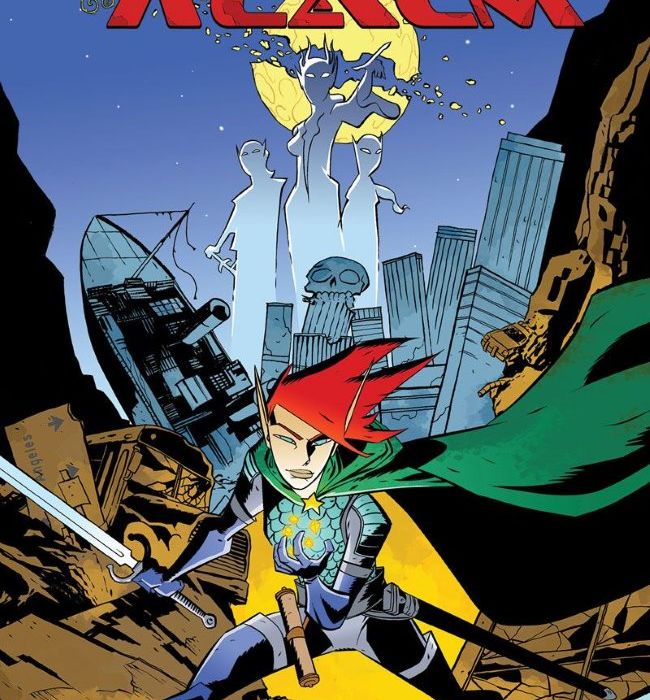 Norse mythology is one of those ancient religions that remains popular today through its exploration in fiction, particularly with the comic medium. We’ve seen Thor and Asgard covered in Marvel, Walter Simonson is doing his own take over at IDW, and there’s the inclusion of them within the “Sandman” mythos over at DC. “The After Realm” looks to be covering similar ground, but from a different perspective: a relatively smaller player in one of the other realms of the World Tree. Can Michael Avon Oeming and Taki Soma prove to have found an untapped narrative source in this well-worn mythology? 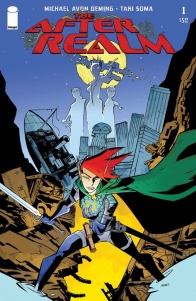 From Eisner and Harvey Award-winning MICHAEL AVON OEMING, co-creator of Powers and The United States of Murder and writer of Thor: Ragnarok and Red Sonja, comes THE AFTER REALM, a new ongoing extra-length quarterly! In the aftermath of Ragnarok, Oona, an elven ranger, sets out into the post-apocalyptic chaos to discover the fate of the old gods. But first, she must fulfill an oath to a lost friend that could doom what’s left of the Nine Realms.

Right off the bat, I love that we have a female protagonist. Oona is pretty well realized from the start of this book, literally to the point of starting with a flash-forward of her keeping a diary in the fantasy apocalypse. As we move on, we jump back to her childhood which she shares with a close friend that is kept pretty well platonic and realistic for children. Oeming also shows Oona as being interested in cartography, which is a great character detail to show readers a little more of her intricate, slightly obsessive personality. The first map we see of hers is also a total Dungeons and Dragons swipe, with grids and all, and it only serves to make the character more endearing and relatable. Who doesn’t love designing their own maps?

The narrative around Oona is pretty well realized and doesn’t hesitate to jump unto the world. Oeming knows that the recent popularity of Norse Mythology is pretty much white noise knowledge at this point, and so doesn’t waste time setting up the usual trappings like what the realms are, what Ragnarok is or what Loki’s deal is. Instead, we get to jump into random exciting events popping up all over the narrative, like Fenris the Suneater ascending from beneath the ground and reuniting with Loki to become a metal-as-hell steed. It also means that we get to discover many new aspects of the world right along with Oona, especially as she works her way through the rangers’ school she’s attending. One aspect that does feel a little shoehorned in is the way that modern technology and weaponry like guns and tanks are incorporated into the story. Oeming does a little work to justify it, saying that Men have the capacity to make the deadliest weapons, but it just feels somewhat dissonant with the tone of the rest of the story.

Oeming has a notably distinct style that works really well for the young adult tone this book seems to be aiming for. The angular inks and linework give the whole tale a very gothic fantasy tone, especially on the first page through the use of tree silhouettes and deliberate panel structure. This then carries on through the setting work as we move a few more pages in. When we first see Elfheim, it’s from a super-high angle that shows off the hidden valley feel of the realm, with each small house having a level of detail that makes it just as unique and interesting as the one right beside it. This beautifully chaotic detailing does come to a bit of an abrupt stop when we see Oona in her rangers’ school, unfortunately. The environment feels a little bit generic, almost as if it was pulled from a game maker’s toolkit, but the action and kineticism promptly resume once Grimildr enters the fray.

The character work in here is naturally delightful, with Oeming giving a freewheeling sensibility to everyone’s movements. The first we get of this is the amazing splash page of Fenris appearing from the ground like a shark leaping mid-air to catch prey. Oeming really sells it by having the environment really react to these movements too, giving a sense of scale and physicality to every move. After this shot, Oona feels like she’s being constantly pulled away to do something, which not only is the case most of the time, but also says a lot for her personality and the fact that she’s always aware that she’s meant for something more. Oeming also does some great work with camera angling for characters. One of my favorite shots in the book is the introduction to Grimildr, which has a wonderfully exaggerated lower camera angle that positions the character as the fierce, scowling warrior queen that she is.

Taki Soma is a frequent collaborator of Oeming’s and does some solid work coloring this issue. The forest of Elfheim has a very lush, lived-in feel because of the dark greens and bushy shading that is used to color the area. It does feel a little desaturated and feels like it has the potential to be livelier were this not the case, but it does add a rustic tone to the overall setting which is appropriate to the source material. Soma’s work on the artillery and human weaponry, as much as it does feel out of place narratively, does look pretty spectacular too. There’s some aggressive, glowing reds and oranges that really pop and make it feel like a dangerous, almost alien force. The page that really sold me on Soma’s work, however, occurs when Oona stumbles upon the crystal jail of Loki. The sky is rendered with a wonderous, smudgy array of blues and dark greys that conveys the supernatural feel of the scene really nicely.

“The After Realm Quarterly” #1 is a solid beginning to what is shaping up to be a great lesson in how to do Norse Mythology in the style of young adult literature. Oeming has a good handle on his characters and world and portrays them interestingly in his tried and true visual style. Soma also adds a great extra level of depth through her coloring, making some scenes pop with the extra vibrancy that they need.

Final Score: 8.0 – Oeming and Soma bring us Norse mythology filtered through young adult themes, and it makes for a compelling series debut.