After an incredibly gripping 8-page “Divergence” preview last month, expectations were high for “The Omega Men.” Does the book follow through on them? Find out in our spoiler-free review. 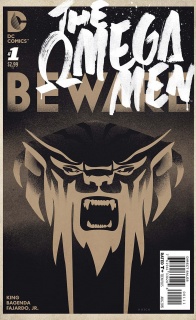 The Omega Men are back in an all-new series! They’ve murdered White Lantern Kyle Rayner and now, the universe wants them to pay! Who are these intergalactic criminals – and is there more to their actions than meets the eye

All last month, as part of the DC3, I was covering the “Divergence” previews from DC, and looking back on them, they were incredibly effective. A book like “The Omega Men,” which would have slipped under many radars, was instead elevated to the position of ‘highly anticipated.’ The preview set the tone, gave a basic premise for the series, and showed off some of Bagenda’s art. The story, told entirely in 9 panel pages, showed the lead up to the execution of Kyle Rayner. It was moving, and scary, and allowed the audience to infer a number of things about the Omega Men themselves.

This issue is supposed to be a fresh starting point, one that doesn’t require the preview, and I don’t know if I can review the title that way. The preview, in an odd way, was far more of a complete story than the first issue is – even the five sentence description that sits on the title page of the preview gives you a more complete mission statement than the first issue does.

That doesn’t mean that the first issue is bad, or that it is inscrutable, or that it isn’t an engaging read. As a matter of fact, I can think of few comics that I’ve read more times to prepare for a review than I did with “The Omega Men” #1. I just finished my sixth read of the issue, and I still feel like I am getting new information from each read through. The book is surprisingly dense, especially for a book with such little dialogue (well, dialogue in English that is – many of the characters speak a foreign language that looks a bit like Chinese or Japanese characters).

Here is the gist of the story: the Omega Men are freedom fighters or terrorists – depending which side you are on – who are fighting against an organization/society called the Citadel. Motivations on both sides are still mysterious, but we get a decent look at 5 of the 6 reported Omega Men. Primus, the apparent leader, abhors violence, but uses it when necessary. Tigorr and Broot appear to be the muscle of the group, Scrapps the cagey one, and Doc the Johnny 5/Wall-E-esque robot. The only reason I know that there are six members is, again, from the preview text.

King, writer of “Grayson,” doesn’t bring as much of his paramilitary background as you might think from reading his biography. Sure, his CIA experience perhaps informs his understanding of fringe groups and/or the mindset of revolutionaries, but this doesn’t feel like a book written from the perspective of a counterterrorism expert; it feels like a comic. And that’s a good thing.

This issue shows a failed mission by members of the Citadel to take out the Omega Men, and ends with the Omega Men, seemingly, making their escape. Everything in between is left a little vague, seemingly on purpose, and allows the reader to understand the world of the story before really digging into the story itself. This issue shows, more than tells, about the situation at hand. We meet the Viceroy, who appears to be a, if not the, leader of the Citadel, and he seems hellbent on eliminating Primus and co.

[Side note: I know not a single person is thinking this, but this is not the same Primus that was Jamroth Bok’s “sidekick” in “Batman: Odyssey” – he is not a half human/half dinosaur hybrid from the Underworld. If any of this “Odyssey” nonsense makes sense to you, I’m sorry.]Continued below

Bagenda’s artwork is not quite as anti-DC house style as Gustavo Duarte’s in “Bizarro,” but this art is not something you typically see in a DC book. Known, if at all, for work with Titan and “Heavy Metal,” Bagenda’s art fits the story like a glove, and is similarly as cagey as the plot is. At times, his work seems painted and deliberate, and at other points, scratchy and urgent. Ten of the twenty pages follow the same strict 9-panel grid that the preview pages did, and the results are spectacular. The issue all takes place in a small building on a large planet, and the panel structure helps keep a claustrophobic feel to the book (which also ties into the last few pages, which I’m not going to get into, in order to keep this review spoiler free). The panel sizes all seem quite purposely chosen, with the few splash pages used to great effect.

Because the issue is filled with new characters, it can take a little bit of time to identify who is who, but Bagenda does a good job portraying the Citadel’s folks as sleek and free of distinguishing characteristics; for instance, both the Viceroy and the foot soldiers that Scrapps and Primus encounters are bald men, seemingly of different alien races. The seemingly faceless soldiers have another similarity: they are both shown, quite graphically, shot in the face. This is not an all-ages title, and is rather violent. Bagenda’s violence never is presented as sexy or fun – it is disgusting and disturbing.

Taken along side the cover, featuring a Trevor Hutchison illustration and some graffiti, the book doesn’t look or feel like anything else DC is putting out right now. That’s a great thing; this is one of the books that DC has decided to roll out as part of its effort to diversify its line and give creators a chance to tell stories that more resonate with them. This book feels like a personal, and inspired tale, from the cover dress to the final quote by philosopher William James.

The issue also, like The Hobbit before it, features a song that helps tell the story. This song, sung by both the Viceroy and Scrapps, seems to be an ancient song of faith, one that transcends language and politics.

Oh, Lord, for thou shall return, return, return
And oh, shall we burn, burn, burn
For we are the low, the cursed, the beggar
And thou art the end, the curtain, the omega

The term ‘Alpha’ is thrown around quite a bit, and seems to be a title for the god of this world. Alpha and omega, in Greek, mean the beginning and the end. While the Citadel celebrates the beginning, the Omega Men are celebrating the end. Whether or not this means the end of the Citadel, the end of days, or both, remains unseen at this point.

My fear for the book is that there isn’t a clear hook here and, if such a hook does exist, it was found in the frequently mentioned preview. By having Kyle Rayner as the focus of the preview, it gave readers an entry point into the book. Rayner’s murder is referenced here, but it is handled in a subtle way. The other issue is that Rayner isn’t the name draw that Hal Jordan, or even Guy Gardner or John Stewart, is. On top of that, this isn’t Rayner’s book – his death informs it, but he isn’t the focal point of the book.

Nor should he be – this isn’t “Kyle Rayner” #1, it is “The Omega Men” #1, and the book does a nice job establishing who they are, and fits Rayner into the picture as well. This isn’t an instantly gratifying book; it is a slow burn that rewards re-readings and delving deep. If fans can find it, I think they’ll be intrigued – here’s hoping that it gets the fair treatment and long run that the preview and first issue suggest.

Final Verdict: 8.5 – A solid start to “The Omega Men,” and a fitting new direction for “Divergence”/DC You.