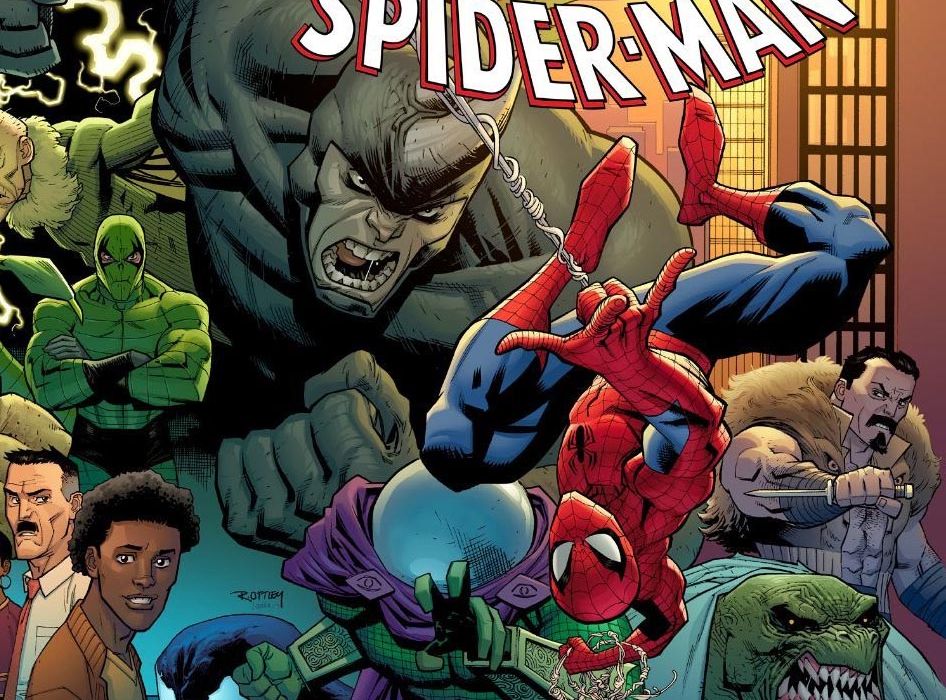 After Dan Slott’s amazing, decade long run on the title, Nick Spencer and Ryan Ottley have taken a back to basics approach with “The Amazing Spider-Man” #1, and it works amazingly (sorry) well. Find out more in our review, but be careful, as there are some pretty serious spoilers in this review.

Written by Nick Spencer
Penciled by Ryan Ottley
Inked by Cliff Rathburn
Colored by Laura Martin
Lettered by VC’s Joe Caramagna
An alien invasion hits New York City and the only one who can stop it is…Spider-Man?! And if even that’s not enough, you’ll see a new roommate, new love interests – and a new villain! Spider-Man goes back to basics courtesy of Nick Spencer (SECRET EMPIRE, SUPERIOR FOES OF SPIDER-MAN) and the Marvel debut of RYAN OTTLEY (Invincible)!

It doesn’t happen often, but there are times where I will read a comic and know that it just isn’t for me. I will open up the book and see certain decisions being made in either the writing or the art, the ways that the pages are coming together, where I know that the book is ostensibly good, and that many people will end up enjoying it, but I am not going to be one of those people. Sometimes, though, the opposite is true. Sometimes you open up a comic and just think, oh, this was made for me. “The Amazing Spider-Man” #1 is one of those books. It feels like Nick Spencer and Ryan Ottley reached into my brain, grabbed exactly what I wanted for this series, and decided to put it on paper.

Part of this might be that what I want from “The Amazing Spider-Man” isn’t a particularly rare thing. There are plenty of fans, myself in their number, that haven’t been huge fans of the character’s direction since ‘Brand New Day.’ It is not an uncommon sentiment for fans to yearn for the reins of Spider-Man to be handed over to another creator, and to have some of the decisions that have been made over the past decade of comics reversed. With “The Amazing Spider-Man” #1, Spencer and Ottley have taken exactly the kind of back to basic’s approach that I personally have wanted with this character for years.

There were a lot of people who had reservations about Spencer taking over the title after what happened with “Secret Empire.” But, I’m happy to say that the writing in this issue is much more in the vein of “Superior Foes of Spider-Man” and his “Antman” run. That is to say, this is a series that seems a lot more focused on character to character interactions and being funny than it is a series worried about making big political statements. And in most cases, Spencer does a very good job of writing those interactions.

“Amazing Spider-Man” #1, spends a lot of it’s time resetting the playing field for Peter. I said before that this issue makes many decisions I agree with, but that doesn’t mean that the craft of the issue is without reproach. The back to basics approach to the issue has both its positives and its negatives. There is a ton of space in this issue spent moving pieces around so that the series can start in ernest, and a lot of this involves tearing Peter’s life apart, very quickly and in almost every way. The issue spends so much time stripping Peter of all the things he’s gained in the last decade that it can come across a bit ruthless.

But, on the positive side, the way that the issue tears Peter down is still rooted in what has happened in the past ten years. While it takes away much of what he’s gained, it’s clear that Spencer isn’t completely ignoring Slott’s massive run that came before him. There are a number of plot set ups here that play off of what has come before. It’s a back to basics approach that, at least in this first issue, doesn’t seem to throw the baby out with the bath water. On top of that, though, Spencer does a great job capturing Peter’s voice in this issue. There is a lot of dialogue, and captions, but Spencer writes a Peter that is funny and smart and clearly a little annoying to many of the other super heroes around him, and it works really well. There are some bumps in the issue. Spencer’s jokes don’t completely land, and there are a few moments where the script feels like it is a bit too wordy for its own good.

When I say that this is a book made almost specifically for me, part of the reason is Ryan Ottley handling the art duties. I wrote a lot of words about “Invincible” earlier this year, and one of the main reasons I was so deeply in love with that book was Ottley’s art. I’m happy to say he is still doing a fantastic job. The issue is split between an alien invasion in New York City, being fought by the entire superhero community, and watching Peter’s personal life slowly fall apart. Ottley succeeds at both bringing scale and motion to the fight sequences, and I loved getting to see him draw all of these marvel characters. With the small character moments, he really sells the soap opera, interpersonal relations of the characters. I wish that Ottley could have drawn “Invincible” forever, but since he couldn’t, seeing his work on a mainstream superhero book like this is a great alternative.

However, while I do think that the writing recaptures much of what I want from Spider-Man, and I will always be in love with Ottley pencils, the most exciting part of this issue comes toward the very end. Spencer and Ottley seem to be intent on reversing “One More Day,” bringing Peter and Mary Jane back together once again. The issue ends with MJ pulling Peter into a kiss, the issue opens with Peter thinking back on a dream he once had of the two of them being together. Fans have spent ten years waiting for that storyline to finally be reversed, and while I don’t feel right arguing it’s a reason that the book is good, it is probably the development in “The Amazing Spider-Man” #1 that made me the happiest. But, even with those flaws, this is the most excited I’ve been for the flagship “Amazing Spider-Man” title in a long time, and I cannot wait to see what Spencer and Ottley do with this series.

Final Verdict: 8.0 – Despite some flaws in the script, Spencer and Ottley’s “Amazing Spider-Man” #1 is an exciting start to a new era of Spider-Man.