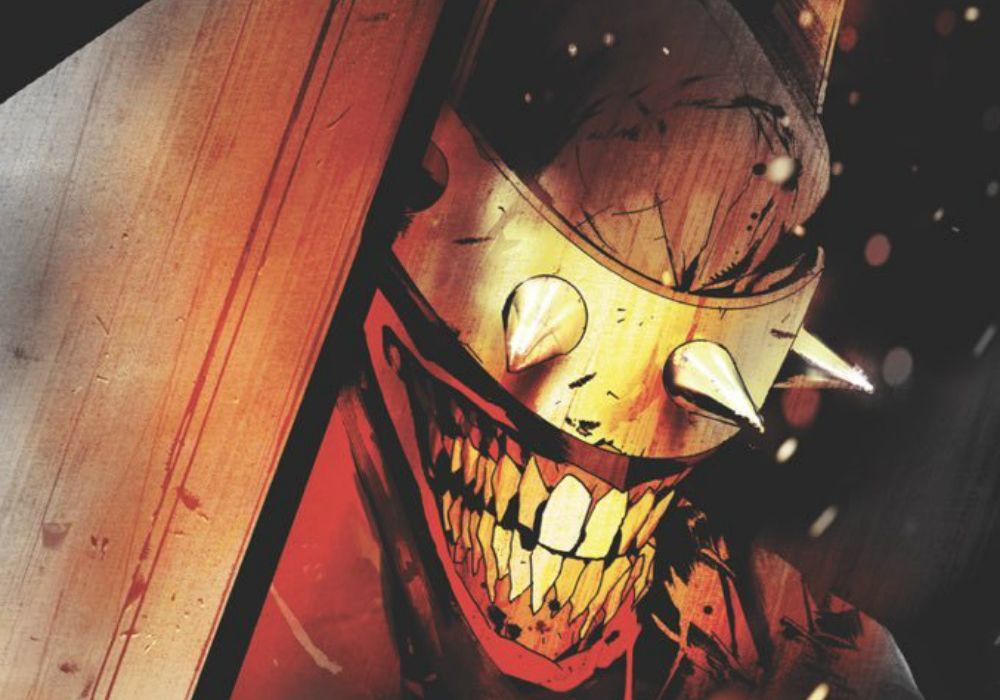 While Scott Snyder’s run on the main “Batman” book ended with the New 52, he has continued to write Batman in a variety of other forms since. However, there is something about “The Batman Who Laughs” #1 that feels like a return to the voice Snyder had when he was writing the headline “Batman” title, in the best way possible. Combining that with dark, moody artwork from Jock, makes this an issue that is definitely worth picking up. Read on for the rest of our thoughts about this first issue! 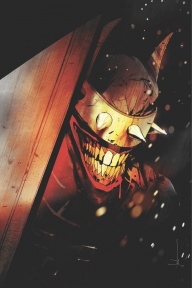 Written by Scott Snyder
Illustrated by Jock
Colored by David Baron
Lettered by Sal Cipriano
“A Batman who laughs is a Batman who always wins.”

Left rattled by the events of DARK NIGHTS: METAL, Bruce Wayne must come face to face with the nightmares spawned from the Dark Multiverse. But even though evil devoured evil in the collapse of Challengers Mountain, the Dark Knight still has his doubts. He discovers that the Batman Who Laughs not only survived the fight with The Joker at the end of METAL, but now he is enacting a sinister plan across the Multiverse—something both terrifying and oddly familiar. But when Bruce Wayne realizes the only way to stop this madman is to kill him, he must consider violating the very rule Batman won’t break…the same rule that created this insatiable villain—the Batman Who Laughs!

Reading the opening page of “The Batman Who Laughs” #1 gave me a huge hit of nostalgia for the New 52 “Batman” title. I began reading comics right around the start of the New 52, and so the way that Snyder writes Batman is deeply imprinted on my impression of the character. I’m not going to argue that the plots of the New 52 “Batman” were always perfect, but the way that Snyder writes Batman, the voice that he gives the character, is in my mind pretty much perfect. If you’re anything like me, and you have this residual fondness for the way Snyder writes Batman, “The Batman Who Laughs” #1 is definitely worth a look.

Dark, Elseworld takes on Batman are nothing new to the character. But, with “The Batman Who Laughs,” Snyder has really tapped into a vein of critique on Batman that expands on some of what he covered in his own run on the character, and what has happened with Batman since rebirth. There are few superheroes that have spent as much time having their psyches evaluated in their own comics than Batman, but the work Snyder does here is interesting. It’s an interesting theory, to posit that The Joker isn’t really the opposite of Batman.

There are some moments where the writing is a bit too on the nose with what it is doing. Batman, when talking to Jim Gordon in this issue, basically lays out exactly what Snyder thinks is interesting about the character, in no uncertain terms. But even with these moments where the script lacks subtlety, the way that Snyder writes these characters, the interactions between Batman and Gordon, or between him and Alfred, really shine through. Honestly, the biggest problem I have with this issue is that Snyder hasn’t given us a way to shorten The Batman Who Laughs name. Which while a pretty minor complaint but does get quite annoying if you want to write about the character at any length.

The script for “The Batman Who Laughs” #1 is a bit narration heavy, but Jock’s line work does a great job of keeping the issue moving. Jock is able to handle both the high stakes action that is present in this issue, and the small, creepy moments with great finesse. His use of heavy inks in this issue give everything a dark, moody vibe, which works for the story. The artwork leans into the horror vibe of this issue, which for a character like The Batman Who Laughs, works really well. His design can be a bit over the top with how edgy it is, but Jock does great work with his inks, keeping The Batman Who Laughs mostly in shadow. He’s portrayed like a horror monster, with usually only his shining white teeth standing out from the complete shadow that is the rest of his body.

The only issue in the artwork that comes up in this issue is the way Jock portrays characters faces. There isn’t a ton of consistency with faces. Or, the faces and characters are consistent enough that it is usually easy enough to tell who anyone in any given scene is. But, this is a story about multiple different versions of Batman and Bruce Wayne, and there is one particular moments where we are supposed to be making a connection that two different characters are alternate reality Bruce Wayne’s and the reveal doesn’t quite work, because the faces for these characters just don’t look very much alike.

Aside from that, though, the art in this issue is pretty spectacular. David Baron is able to perfectly match Jock’s inks with a color pallet that is mostly muted, with bright pops of color when the issue class for it. Sal Cipriano does good work with the lettering in this issue. He gives both the Joker and The Batman Who Laughs distinct word balloons, both of which follow the same conventions, but have enough of their own unique style that it works.

“The Batman Who Laughs” #1 is a really enjoyable issue. If you’re looking for a moodier, more horror focused Batman story, this would be a pretty good fit. If you’re interested in Batman’s psychology but want to explore it in a pulpier way, this is a good book for that too. Or, if you’re like me, and you’ve really missed the characterization that Snyder gives Batman and his secondary characters, this issue is a lot of fun. While there are some minor hiccups throughout the issue, I think that over all, “The Batman Who Laughs” #1 is worth checking out.

Final Verdict: 8.0 – “The Batman Who Laughs” #1 is great continuation of Scott Snyder’s Batman, and an engaging, moody story in its own right.