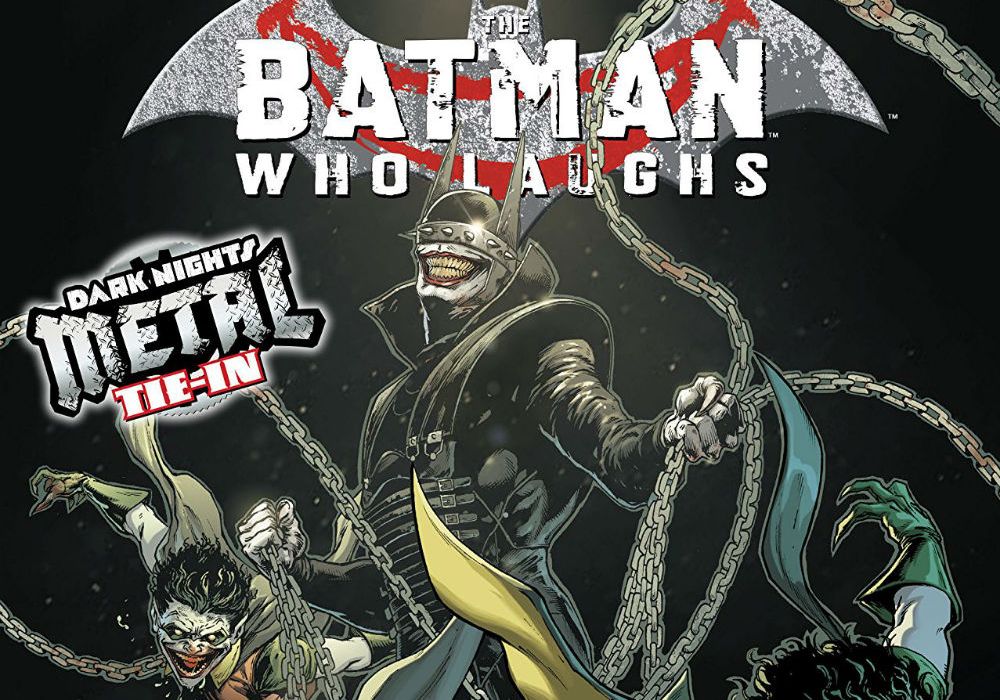 Turns out the only thing standing between the Batman and the Batman Who Laughs is one bad day. Stop me if you’ve heard this joke before…. 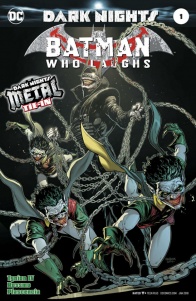 As the events of DARK NIGHTS: METAL rock the DC Universe, the creatures of the Dark Multiverse stand ready to invade our world! How can the World’s Greatest Heroes stop a horde of deadly beings that appear to be powerful nightmare versions of familiar figures? Find out in these special tie-in issues!

“There’s nothing more frightening than when all the cards lay out on the table just right . . . but then another comes and changes the meaning of the entire hand,” says the Batman Who Laughs in an introductory monologue, literally laying out a deck of cards all bearing visages of the Justice League’s trinity. Lastly, he flips over one featuring the Joker, standing tall in purple-suited, grinning glory. “And there’s no way to know what’s going to happen next.”

Unfortunately for “The Batman Who Laughs” #1, that opening statement couldn’t be further from the truth. James Tynion IV and Riley Rossmo’s capstone on this series of one-shots follows the exact paces we all saw coming the second we found out there was to be a Joker-analog in the mix. Nothing here feels unexpected, or even revelatory about the seeming ringleader of the evil batmen. Sure, Rossmo gets to revel in the sadism of the overall premise – reminding us all that he cut his teeth drawing horror comics par excellence – but that mileage is dependent on how far an appreciation of Rossmo’s craft will take you.

Personally, I’ll devour every panel I can get of him drafting the Dark Knight, even if it’s an overly grim iteration from the darkest timeline. I’ve been banging the drum for Rossmo to take the lead on a Batman book since his work on the “Batman/The Shadow” crossover from earlier this year. There’s a unique, worn-in texture to the way he sets a scene that evokes a vaguely impressionistic take on the wee hours of night. And there’s something about how loosely his lines convey detail contrasted with the jagged angularity of his figure work. It’s a compellingly fresh take on the bat-universe.

Compositionally, Rossmo’s more exploratory one- and two-page spreads feel like a more rugged version of the innovative paneling favored by J.H. Williams III during his time spent in Gotham. When the Joker’s goading finally cracks Batman, the scene itself plays out over a fractured mosaic. Broken panels resonate out and around the focal point of a shattered bat. And the symbol itself is defaced by a dead-eyed grin. Later, when “The Batman Who Laughs” #1 catches back up to that diatribe we saw at the start, Rossmo constricts the rest of the scene by jamming the resulting panels into the outlines of the cards strewn out across the table.

Tynion IV’s script, on the other hand, feels like a glorified checklist in watching the Batman break bad. Joker goads Bruce into crossing that one line. Check. The extended Bat-family gets ruthlessly cut down in the cave. Check. The Justice League Satellite turns into an red-splashed, orbital tomb. Check. Clark gets saved for the very end. Check. Tynion IV does add a touch about Bruce being subjected to whatever sickness had so twisted the Joker’s mind – a plume of green death escapes the fiend’s lips and warps the air around Bruce’s face. And while this might read like an innocuous plot point, it seems to undercut the very intent of these one-shots.

Each has sought to tie Bruce’s villainous turn to some aspect of Bruce/Batman as we readily understand him. Some might be too reliant on a slippery-slope type of descent into evil, but, for better or worse, there’s been an attempt to place culpability in the darker parts of his existing psyche. So while Batman’s fundamental rule gets broken in “The Batman Who Laughs” #1, it’s not really the act of murder and resultant morass of guilt, morality and self-rationalization that creates the grinning Bat-fiend. The heel turn gets tied instead to a kind of weaponized infection the Joker seemingly had plotted for his death throes. It’s mind control, of a sort. And it dulls any thematic impact this issue could have had.

This comic circles back several times to the image of the Batman Who Laughs sitting behind that table with cards laid out overtop. And several times the layout of those cards looks suspiciously like a game of solitaire. Whatever your opinion has been of the evil bat-men, it’s undeniable that they exist to give life to various facets violence and anger that in part fuel Bruce’s nature. That no one has been able to stop them yet implies that this is most likely a feat attainable by Bruce alone, like he’s playing a grand, multiversal game against himself. It’s a shame then that the one who feels like the biggest threat feels the least like a dark reflection.

“The Batman Who Laughs” #1 is technically sound. James Tynion IV tells the story well – a bit heavy on the Big Bad’s soliloquy, but not damnably so – it’s just not necessarily a story that needed telling. As any sort of thematic statement on what this analog has to say about Batman or “Metal” in general, it sorely misses the mark. It’s more an excuse to double-down on the exploitative thrills of a Batman-Joker hybrid. And to that end, Riley Rossmo can seemingly do no wrong. While the images themselves might not be pleasant to look at, the artistry is impeccable.

Final Verdict: 6.5 – Rossmo’s art is fantastic all around, but bonus points for finally getting the Batman Who Laughs’s sneer to feel more like the Joker and less like Judge Death.