The latest issue of “Genius” goes from strength to strength as teenaged terrorist/freedom fighter Destiny revels in the wake of a battle won. But the real question is, as the odds begin to stack against her, has she any hope of winning the war? 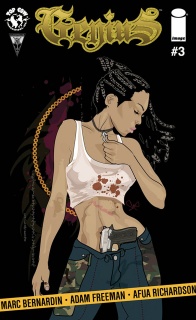 What if the greatest military mind of our generation was born to a people who are already supremely conditioned to wage war, who know nothing but violence since birth, and must continually adapt to new predators in order to survive? What if the second coming of Alexander the Great, of Genghis Khan, of Napoleon, of Patton…what if it was a teenaged girl from South Central, L.A. named Destiny? And what if she decides to secede three blocks of the ‘Hood from the Union? Who is going to take it back from her and her army of gangbangers? Who can?

At first glance, the opening gambit of “Genius” seems a pretty tall order for such a limited run. The spiritual re-awakening of history’s greatest military minds in the body of a teenaged girl could be a premise to span years of publishing, so attempting to tell the story of Destiny, the modern-day Napolean of South central, in a five-issue mini-series is a pretty ambitious endeavour for writers Marc Bernadin and Adam Freeman. However, if the last two issues manage to maintain the standard set by their existing predecessors, this book could well end up becoming 2014’s poster-child for the old adage ‘good things come in small packages’.

This series has been playing hard and fast with the rules of chronology since the first issue, giving the audience a glimpse into the past events that lead to the story’s central conflict while simultaneously laying out the power players in the present. Issue three doesn’t buck this trend, opening with a little more background on the enigmatic figure of Destiny. Given that she is the series’ protagonist, and the grand architect of ‘the siege of South Central’, we’ve been privy to surprisingly little about her up until this point and, as we come up to the half-way point in the run, there’s still little resembling a coherent ‘truth’ to the overall narrative.

Bernadin and Freeman’s fractured approach to story-telling only serves to enhance this fact. Their multi-perspective approach to “Genius” means that, rather than getting a straight forward ‘Good Vs Evil’ narrative, we’re treated to a collage-style story from a multitude of characters who really believe they’re doing their version of the right thing.

This storytelling style is perfectly complimented by Afua Richardson’s art. Her graffiti-style rendition of L.A. captures the vibrancy and harshness of the urban sprawl in a single swing. Her page arrangement forgoes the more traditional panelling structure in favour of a more subjective positioning of visual elements. Richardson’s characters stand vivid and monolithic in the foreground while the story flows around them, colourful in every sense of the word.

The realism of this comic’s subject matter is countered beautifully by Richardson’s larger than life visuals. The slickly finished characters look like the airbrushing work of a street tagger and she manages to convey so much about the characters through their dynamic body language and positioning on the page. The rebellious approach she’s taken to page layouts gives her the freedom to frame and angle certain characters in unique ways to highlight their power over other members of their respective gangs – whether it’s Destiny’s Crew or the National Guard. The way Richardson pulls focus to certain characters on the page works in tandem with the rousing speeches that the Bernadim and Freeman have written, their characters ministering to their followers like kings and queens of social rhetoric. If the creative team behind “Genius” ever find themselves out of comic-book work there will always be a place for them penning political propaganda.

This series was given life as part of Top Cow’s annual ‘Pilot Season’, in which readers get a chance to vote for their favourite first issues to give them a chance at a longer life-span. “Genius” came second in the 2008 shortlist but, although nearly six years have passed since it won a chance at a second life, the themes that it encapsulates seem just as relevant as ever. While standing your ground and fighting for your turf are fairly universal story elements, the idea of the police getting away with brutality, and the importance of the media exposure when it comes to civil conflicts are both closely intertwined with this mini-series. Bernadin and Freeman explore the way the public perception of conflict affects how all modern wars play out with great aplomb, and it’s seriously interesting to watch the nuances of public opinion play out over the panels of a comic-book.

There’s an air of fatalism about this comic that, sadly, seems all too familiar. While Destiny is dealing with the fallout from losses on her side she asks her ‘troops’ if they want to “get popped in a bodega? Or in the field of battle?” From her perspective the death of these teenagers is all but a foregone conclusion, the only choice they have is whether they choose to put their lives on the line for a cause. Given the current on-going conflict between police and civilians in the American town of Ferguson, as well as many other barely documented incidents of police violence in America, “Genius” often seems surprisingly close to social commentary for such a high-concept piece of fiction.

With only two issues left to go until the run is complete it will be interesting to see if they plan to mirror the reality of this situation to the bitter end or exercise their creative rights and subvert the expectations of their audience.

Final Verdict: 9.0 – By not allowing themselves to get caught up with the grandiose nature of their original idea, focusing instead on the human element of civil unrest, Bernadin, Freeman, and Richardson have managed to produce a mini-series which manages to be both exhilarating and poignant in equal measure.