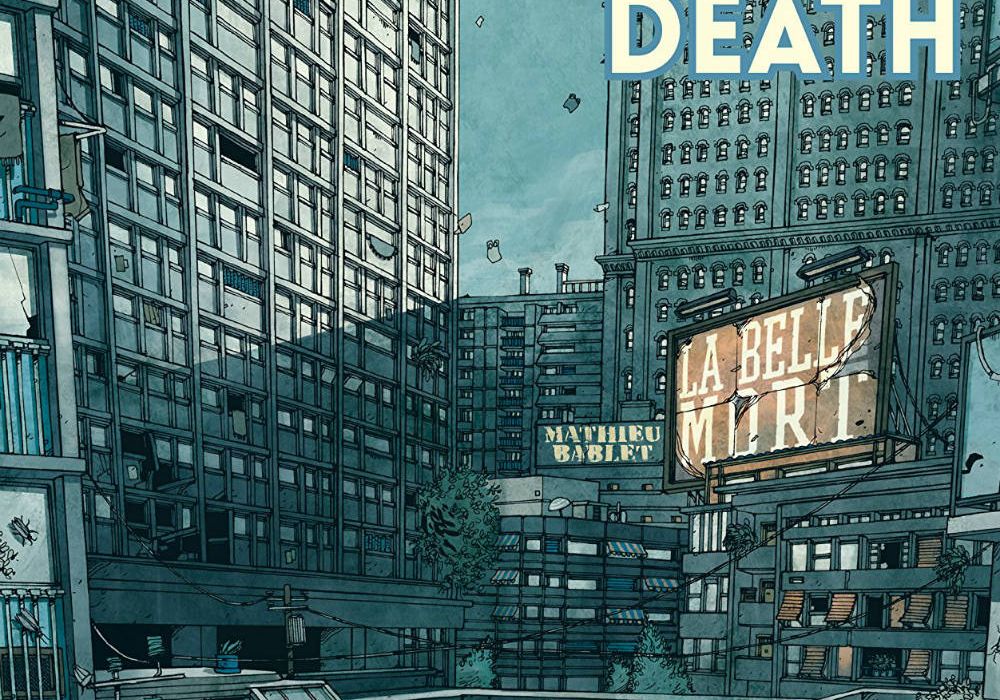 “The Beautiful Death” #5 is the final issue in the translated miniseries by Mathieu Bablet. Is it able to bring this story of post-apocalyptic life to a satisfying conclusion? Some spoilers ahead. 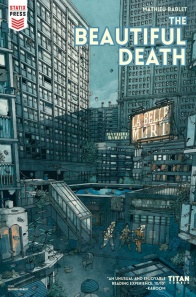 Written and Illustrated by Mathieu Bablet
Translated by Edward Gauvin
The apocalypse has been and gone. The age of humanity is at an end. Horrifying insectile aliens from the depths of infinite space are now masters of the Earth.

The first thing one notices about “The Beautiful Death” #5 is that it really is a beautiful book. The entire story so far has taken place in a city, and Mathieu Bablet’s art is consistently detailed and breath taking. The buildings and insectoid monsters tower over the characters, showing how small these people are in the grand scheme of this story. At the same time, when the action picks up, there is a franticness to the characters movements. While “The Beautiful Death” is not a book about action, in the scenes where it has to be, the action packs a pretty serious punch.

Where the art shines even more, though, are in the quiet moments. There is one main sequence in this book that highlights this. Toward the end of the issue, there are about three and a half pages completely devoid of characters. In this moment, the issue shines. Babet is so adept at just portraying this empty city. He captures the odd sense of stillness and wonder that would be present in a city without any humanity.

There is one specific panel in this sequence of an abandoned bathroom, and in the corner, there are a number of vines creeping into the building. Out of one of the urinals, there’s a small amount of greenery growing. The way that this world is realized, the things that have been left behind as people disappeared and what has changed is so well done, both in this issue and throughout the series as a whole.

Unfortunately, the script for “The Beautiful Death” #5 doesn’t quite hold up to the artwork. I have no idea what the story read like in it’s original language, but the translation makes some of the dialogue a bit clunky. This is forgivable, as long as one understands it’s a translation. It’s difficult to make prose read as well in translation as it does in its original language.

What is less understandable, though, is the plot of the issue. As I’ve said before, it’s impossible for me to know what the issue would read like in it’s original French, but it seems like there is something missing from this story. Whether that is the fault of the translation or the story itself I’m not sure, but there is a bit too much plot in this final issue. For a story that is strongest in its small moments, this final chapter focuses far too much on big ones. While it is exciting to have a final confrontation with the alien queen, I have to wonder whether that was the best climax to a story that seemed to mostly be about how people try to live their lives.

In that same way, the story ends with a little epilogue, some hundred and fifty years in the future. But what is the point of this epilogue. This epilogue makes the story end on a kind of hopeful note, but the note that it ends on seems a bit detached from what the rest of the story is trying to say.

That is my biggest complaint with “The Beautiful Death” #5. For all its beauty, and for all it’s seeming poetic aspirations, it’s thematically unclear. The story seems to be trying to tackle ideas about death and life after the world has been destroy. It poses questions about when it’s worth continuing on, and when death would be a better alternative. The three main characters end up in three very different places at the end of this issue and this series, and it seems to be beginning the question that is posed by its title. Which of their fates is the one that is a beautiful death? Except having reached the end of the story, I’m not sure what the story is trying to say. Which is okay, it’s fine for art to leave a reader with questions. But I get the sense that “The Beautiful Death” was trying to give me a few more answers than I was able to pick up on.

Final Verdict: 6.9 – “The Beautiful Death” #5 stumbles a little in its plot, but gorgeous visuals and pacing are able to make up for it.