Proxima Midnight. Black Dwarf. Corvus Glaive. Black Swan. Ebony Maw. Together they are the Cull Obsidian…the Black Order. Witness them slaughter armies! Tremble in fear as they leave countless bodies in their wake! Recoil in horror as they…eat lunch? 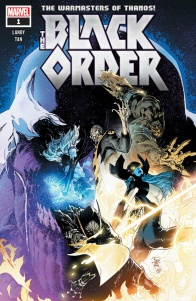 FROM THE INFINITY WAR INTO THEIR OWN LIMITED SERIES! They are the five dreadlords, the Cull Obsidian, Thanos’ most feared warriors and disciples… Ruthless villains to a one, the Black Order has been dispatched by the Grandmaster to destabilize a burgeoning empire, and along the way they come to realize that as big and as bad as they are, there is always someone bigger and badder… The bombastic writing style of novelist Derek Landy (Skulduggery Pleasant) and the electrifying artwork of Philip Tan combine for an absolutely unhinged super-villain adventure!

The Marvel Cinematic Universe had been building up towards Avengers: Infinity War for years. The Avengers finally faced off with the insanely powerful Thanos. His top lieutenants, the fearsome Black Order was…also present. Truth be told, they were largely forgettable mini-bosses. Only Ebony Maw seemed to have any personality. It’s a shame but with such a crowded film, it’s understandable that the Russos would prioritize ‘Gladys Knight’ over the ‘Pips’, so to speak.

The Cull Obsidian was introduced in 2013 by Jonathan Hickman and are truly sinister and terrifying under his pen. Proxima Midnight happily impaled people on her spear. Ebony Maw manipulated people with malicious glee. This book introduces them as the “world-killing generals of Thanos” and they mean ‘world’ in the plural sense. It makes perfect sense for them to be this way. Of all the beings in the galaxy, these are the ones the Mad Titan has chosen to fight by his side.

This issue puts the focus squarely on the Black Order and writer Derek Landy attempts to develop them outside of their association with Thanos. That in itself is a good idea. Stories can be improved when depth is added to characters and the villains are not just one-dimensional obstacles to be overcome. However, it seems that the Black Order is being taken in the wrong direction. In this issue, they are pretty out of character and what we see does not really line up with what has been presented in the past.

“Black Order” #1 is told mostly through Corvus Glaive’s perspective. Every member of the group is present but Ebony Maw and Black Dwarf are primarily in the background this time around. The book opens with the Cull Obsidian making short work of an army as Glaive muses on death. Landy then does a 180 and Glaive wonders if he’s funny. But why on earth (or whatever alien planet this takes place on) would that even cross Corvus Glaive’s mind? He is the leader of the Midnight Slaughter and has always come across as self-assured in his past appearances. Furthermore, it can not be stated enough, these are cold-blooded killers on a planetary scale. Why should readers care about his little identity crisis or insecurities?

His relationship with Proxima Midnight feels more genuine. The pair has an interesting dynamic and is definitely in love. A deeply twisted love but still. The married couple along with the others are on a mission from the Grandmaster to destabilize the Sinnarian Empire. The Grandmaster goes unseen but it is interesting that the Order are still playing henchmen. As powerful as they are, they have only swapped one master for another.

There isn’t much to be said about their enemy this issue. The Sinnarian Empire is really just there to be a bump in the road. The Emperor is sinister, corrupt and one-note. The Empire’s army is filled with caricatures led by ‘Big Angry’. The name says it all. One might think that this enemy wouldn’t give the Order much trouble but if the solicit for next issue is to be believed the Cull Obsidian may have their hands full. Then again, this doesn’t really feel much like the Black Order.

The Black Order that Landy writes here doesn’t feel as fearsome or intimidating as before. They do wipe out an army but that moment is undercut when they sit around and eat a casual lunch after the battle. At one point, Black Dwarf calls over a waitress to politely point out he got the wrong order. He says ‘excuse me’ and everything. The same Black Dwarf who was ready to conquer Wakanda in Thanos’s name. The group feels more like washed up thugs than anything else. However, it is just the first issue and the Black Order acknowledges that they do feel aimless. Perhaps their arc is to reclaim the terror they were capable of before. Only time will tell as this story unfolds.

Philip Tan’s art is nice. The Midnight Slaughter spends a large chunk of this book locked in combat and those pages are fittingly chaotic and full of motion. Black Swan rips off a soldier’s limb and the alien’s purple blood goes flying. A soldier’s scared eyes are captured in the reflection of Corvus Glaive’s weapon. One stand-out page has the panels go down the middle as Proxima rams her spear through victim after victim around the border. The artwork is one of the better aspects but this particular issue still feels so-so.

Final Verdict: 5.5 – The five ‘dreadlords’ didn’t quite fill me with dread.