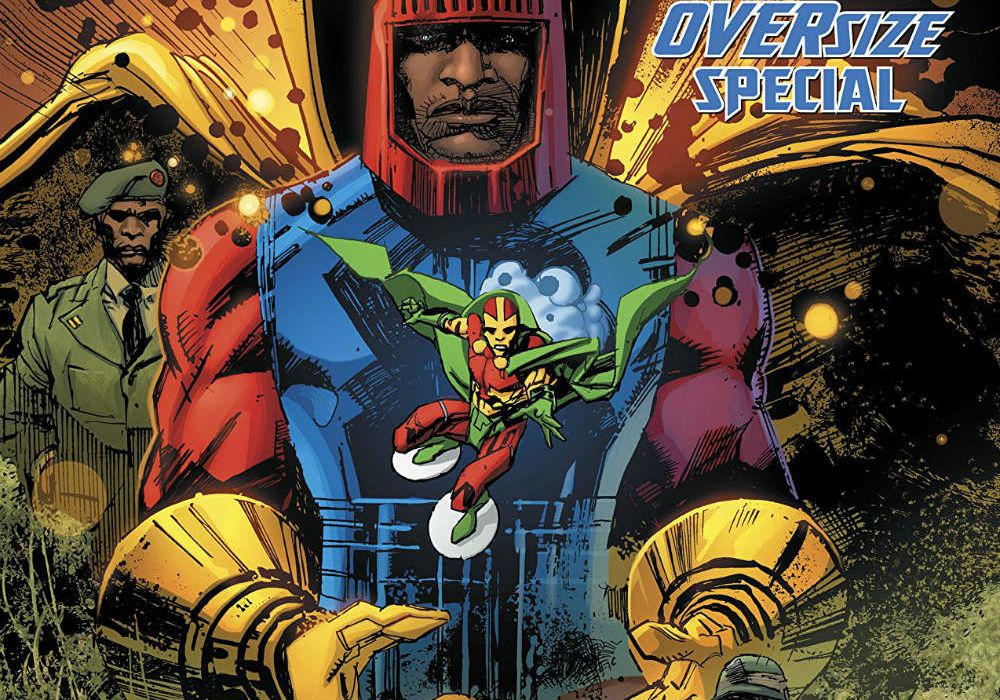 To honour Jack Kirby’s 100th birthday DC Comics has put out 6 specials starring his creations. This one, published two days after his birthday, tells the story of the Black Racer, the death that comes on skis, and Mister Miracle, the great escape artist. Read our review to see if it does justice to The King’s creations, but beware of spoilers. 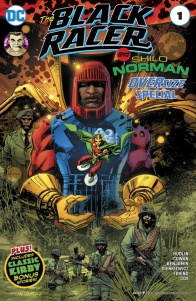 Shilo Norman has taken up the mantle of Mister Miracle, following the example of Scott Free by cheating death on a daily basis. But when he pushes himself to the limit, the Black Racer comes calling. Now Shilo is literally running from death itself and a cosmic chase leads both target and hunter across the universe.
This issue also includes tales of the Young Gods of Supertown reprinted from NEW GODS #5, 7 and 8.

Just like his predecessor Scott Free in his current Tom King-written miniseries, the newer Mister Miracle also finds himself facing death, but in a very different type of situation as his escape trick seems to go horribly wrong. The missile escape trick, and the second page of the story in particular, is a homage to Kirby’s “Mister Miracle” #1, on the cover of which Mister Miracle is also strapped onto a missile.  This story also includes the origin of the Black Racer, which is probably the most interesting part of the story for anyone who isn’t familiar with the character.

Denys Cowan’s and Ryan Benjamin’s pencils merge together to create gruff artwork reminiscent of comics from the past decades, such as 1990’s Milestone Comics. Bill Sienkiewicz and Richard Friend make the inking alternate between sleeker and grittier. The full-page panel image of Willie Walker sitting in a muddy site of death in Vietnam looks stunning and is absolutely the best-looking page of the story. Another full-page panel, the one with Mister Miracle strapped onto the missile, looks good too. Jeremy Cox’s colours fit the artwork well. However, in some parts the art looks rather messy. On the final page it looks almost rushed, which makes the ending a bit of a downer.

Like I said, the parts about the Black Racer’s origin are the most interesting part of the story, telling about how a Vietnam veteran was given the position of a New God. Writer Reginald Hudlin gives some good moments for Shilo Norman too, such as when Norman steals one of the Black Racer’s skis.

The setting changes a lot, because with death nearing him, Mister Miracle splits to exist in two places and the same time, plus the other one of them jumps around in different places and times with the Boom Tube. While these jumps are a part of the plot, they are done in quite a confusing way for the most part, and aren’t the only thing in the issue that leaves me puzzled. On one page a character who bears an obvious resemblance to Donald Trump appears sitting in an office building watching Mister Miracle’s charity event trick on TV, but a couple of pages later he is somehow seen leaving the site of the event. Also, what happens to the OMAC man Mister Miracle lifts out of the water, does he leave him there or take him to safety off-panel? Most importantly, what happens to the Black Racer at the end? The hurried-looking art of the last page and the situation of the other main character not being given closure take away from the triumphant feeling of Shilo Norman’s feat.

Unfortunately these inconsistencies and unanswered questions distract from the reading experience a lot and make it jumbled. The inconsistencies don’t stem from the layout being confusing, it works fine. It’s a problem with the writing and pencils. Janice Chiang’s lettering is otherwise good but in the font used for the Mother Box the letters are so thin and close to each other it’s a bit hard to read.

After the main story there are few of classic Fourth World stories by Kirby himself. These short tales, almost snapshots, are a testament to Kirby’s unparallelled imagination and skill. On the final page there’s a short essay from Kirby’s former assistant Mark Evanier telling about how Kirby originally wanted the Black Racer to have a solo title with a black creative team, and how happy Kirby probably would be to hear that this issue about the Black Racer  and Shilo Norman is created by a predominantly black creative team. Jack Kirby left an everlasting influence on American comics and even though the industry still has many of the same (big) problems it had during his time, it has gotten more diverse than ever, and he most likely would be delighted to see that change.

Final verdict: 5.0 – Honours Kirby’s ideas, albeit in a messy way.