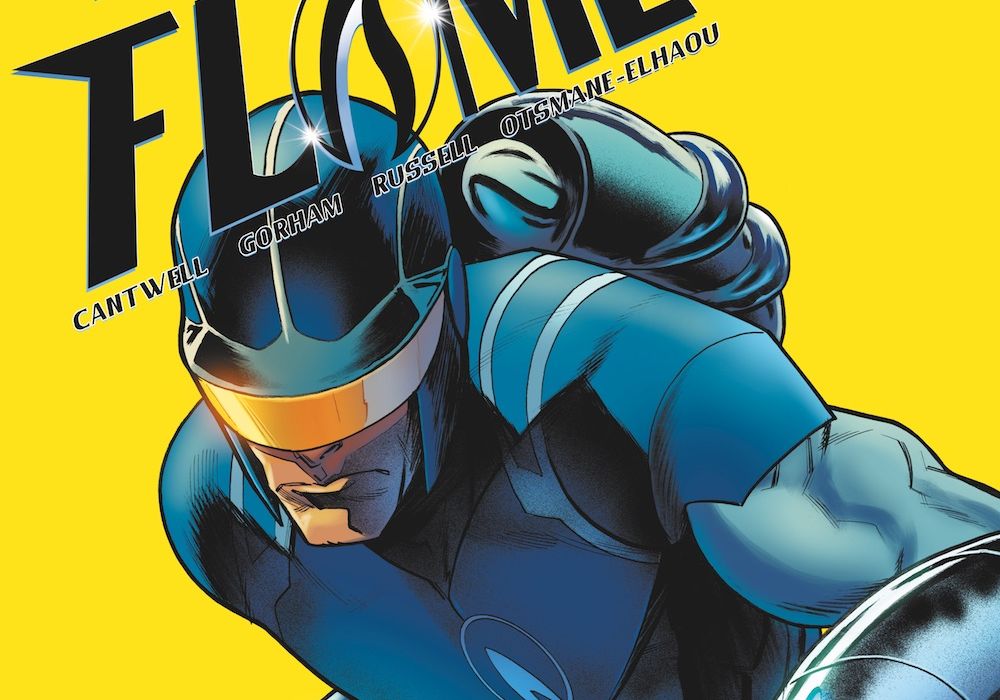 There’s a new character to meet in “The Blue Flame” #2. Exactly why we need to meet her remains an open question. (Warning: may contain minor spoilers.) 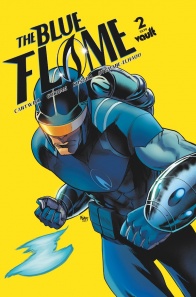 The Blue Flame digs deeper into the Tribunal Consensus as he weighs the decision of defending all of humanity before them…. But wait, shooting victim Sam Brausam is in a coma in Milwaukee, and his estranged sister doesn’t know if he’ll wake up.

Reading and reflecting on “The Blue Flame” #2, I honestly can’t tell if I’m working too hard or not working hard enough. In interviews about the new series writer Christopher Cantwell has said the story takes place in two separate worlds: “one is a high stakes cosmic quest that is so daunting it threatens to overwhelm even this idealized noble hero, and the other is the daily survival of a real man in a real world beset by all kinds of real problems.”

In theory, that juxtaposition sounds brilliant. In practice, it’s difficult to discern if either world is objectively “real” or if all we see or seem is but a dream within a dream.

On one hand, The Blue Flame and his Night Brigade cohorts seem like little more than a ragtag collection of DIY “heroes” who can barely keep it together. Their truck has a broken axle, they need new radio equipment, their clubhouse looks like a breakroom in a small suburban office park and Daddy’s credit cards are maxed out.

Offworld, by contrast, The Blue Flame is as big as it gets – an intergalactic superhero imprisoned against his will who’s fighting to save humanity from extinction.

Seems like the Night Brigade’s marketing and operations departments need to get in sync. If they can’t monetize Cobaltum at least they can launch a Go Fund Me. Saving a sentient species from complete annihilation seems like a worthy cause that people can get behind, even on a planet that remains four orders of magnitude short of being a Type I civilization.

Running through and around these two distinct narrative threads is the story of blue collar everyman Sam Brausam. Well, in the first issue anyway. In the second installment, Sam’s thread is nowhere to be found. Instead, we spend nearly half the book following a woman named Dee, who we met very briefly in the series debut.

We see her wake up in the morning. We see her get a donut and coffee. And we watch her watch the news, numb to the tragedy currently afflicting her city. Until she figures out her personal connection, that is. Then, it’s suddenly go time.

Even after this reveal, however, there’s still a whole pile of questions. Is Dee the anti-hero? Does she have a beef with Sam? Does Sam have a beef with her? We know there’s a backstory somewhere, but what it is we can only guess. The net result is ambivalence. We think we know who to cheer for, but it’s definitely far from certain.

I get the fact launching a new superhero franchise necessitates a slow burn. As my Multiversity colleague noted last week, it’s pretty hard to compete with the decades of history baked into so many other superhero stories. Without a massive info dump right off the bat, there will be a lot of unknowns and inevitable gaps.

That said, at the end of the first issue we learned that The Blue Flame has been charged with saving the world. We’re only two issues in, but already it kinda feels like there should be a lot more world saving and a lot less daily human interest. Isn’t there some kind of time crunch? Humanity’s fate hangs in the balance. Will the Tribunal Consensus decide at some random point in the future when they get around to it or do they have a deadline? It feels like we’re in Act One of an intergalactic courtroom drama, but there’s no sense of urgency. It’s a little hard to feel stressed about possible extinction when the Tribunal Consensus can’t even seem to get their bureaucratic shit together.

Visually, illustrator Adam Gorham and colorist Kurt Michael Russell draw the hell out of the story. The Blue Flame’s retro-future character design is straight-up killer, like they mined undiscovered Silver Age hero and remixed him in 4K. The line work is strong and his colors pop, commanding your attention whenever he’s on the page. It’s unfortunate that his most dynamic sequence is a one-page flashback. Hopefully there’s a lot more to come.

In many ways, the alien character Yarix comes out as the most compelling. Even with very large eyes and not much to work with in the way of facial features, Gorham manages to give him tremendous emotional range. The moment he turns and snaps, “take this seriously” is a hair raising highlight. Russell’s colors are stunning, Gorham’s cartooning is as good as it gets and the scene cuts at the perfect moment.

Elsewhere, Russell’s monochromatic palettes also work exceptionally well. The intense red wash in The Blue Flame’s prison cell is stark and chilling, while the bright yellows in the library are a nice, fresh take on high tech. Hassan Otsmane-Elahou’s often understated lettering is also great throughout the book. He distinguishes the various speakers and interior monologue nicely without resorting to hokey gimmicks.

In the end, the jury’s still out. There’s a lot of intriguing stuff here, but your ability to stick with it likely depends on how much you like to speculate and work to figure things out. There’s not a ton of payoff so far. Hopefully, whatever Sam next finds in the archives will blow the story wide open and the real action will start.

Final Verdict: 6.9 “The Blue Flame” #2 spends a lot of time away from Sam. As a result, the issue bogs down and the questions keep piling up.