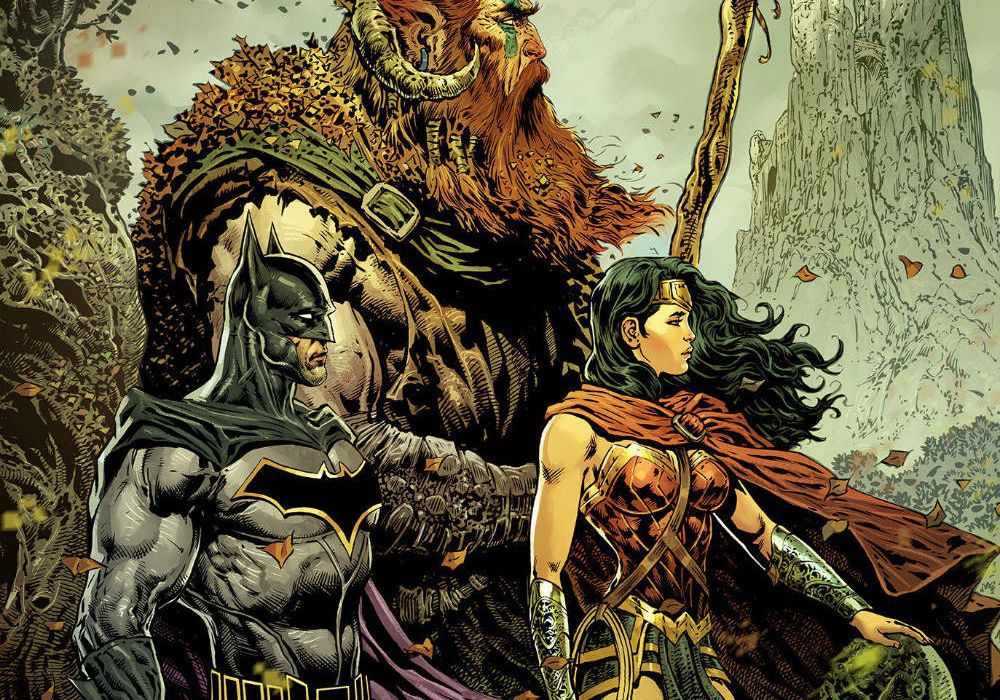 Coming off his stint on Greg Rucka’s “Wonder Woman” and the “Metal” crossover “Bats Out Of Hell,” Liam Sharp, now an exclusive artist with DC, gets a chance once again to play with some of the company’s greats, not only drawing but writing them too. Not only that, but the issue promises to infuse Celtic mythology with the reinvigorated “Brave and the Bold” line. Let’s see just how well Sharp plays on both ends of the creative spectrum. 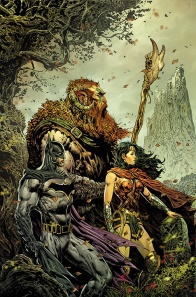 Don’t miss the start of a new, six-issue miniseries written and illustrated by Liam Sharp (WONDER WOMAN)! When a Celtic god’s murder leads to a war between the fairy folk and a possible breach between worlds, Wonder Woman must find the murderer and keep the peace while Batman investigates strange occurrences in Gotham City. As Diana must turn to the World’s Greatest Detective for help, the two heroes quickly learn their cases may be connected.

As a big fan of comics like “Slaine” and “Conan,” what Liam Sharp is doing here with Celtic gods and mythology is ticking boxes for me. There’s plenty of archaic, old timey dialogue and it goes well with the snappy modern talk of people like Steve and Batman. But I love the section based in the Irish Quarter of Gotham, where a homeless Irish man, Patrick O’Schull, finds he’s sleeping where the crossover between the faerie and the human world meets. He talks like a combination of a romantic poet and Cassidy from “Preacher,” or really, every top Irish bloke ever. One thing that I did find a little odd was the heavy amounts of dialogue. For an artist translating to a writer, usually you’d find more focus on the art, but Sharp tends to overfill. It works in sections with the Celtic Mythology and poetry, but can choke the art in more intimate moments like the one between Diana and Steve.

Then there’s the characterisation. Sharp understands the characters that you’d expect, because they’re much more from his era. His Batman is a smooth mix of suave, snappy responses when in Bruce Wayne persona, and combines the perfect level of gravitas and brooding. When he goes out as Batman, he’s even better: overly serious, terrifying, and highly intellectual. On top of that, Sharp’s own characters, like the Celtic deity Cernunnos Cernach is a fun combination of well-meaning old man and wise patron saint. Sharp knows what he wants with these characters, but Sharp’s Wonder Woman has a bit of a characterisation problem. When she’s with Steve, she’s fine – she’s playful, almost protective and loving. But as soon as Cernunnos comes around, Diana loses her signature spunk and almost immediately becomes submissive to a God she’s never met and one that’s technically not even part of her religion. Admittedly, it’s nice to see her adopt a peaceful stance, but it’s just kind of jarring to see her play so well with the gods given her history with them. Thankfully Sharp has her play an active role when questioned about the faerie world murder, having her persist that a proper investigation should be conducted for justice to fully be served.

What might not surprise you, fortunately, is how much Sharp kills it on the art. Stylistically, Sharp is 100% in his zone. You might have seen hints of the mythological influence in his previous “Wonder Woman” work, but it is firing on all cylinders with the Celtic setting, a natural evolution from his exaggerated ’90s work. The opening page sets the tone perfectly, every aspect of it comes together to create something that looks like it could’ve come from a holy text. The gilded, patterned borders; the positioning of art at the bottom of the page to highlight the spectacular title text; it all screams ornate and important. And the art itself fits the tone perfectly. As I said, Sharp has honed his signature style to something reminiscent of pulp texts and artists like Massimo Belardinelli (“Slaine”) which works well at giving the issue a sense of grandeur. Yet it’s combined with modern comic sensibilities to give it a big screen, cinematic effect. This is obvious once you turn from the title page to the next, double page splash, which is structured so well it could tell the story just as efficiently without the accompanying text. The combination of mythical creatures at each other’s necks juxtaposed with Cernunnos Cernach calling out in woe works to powerful effect.

Sharp has a great sense of pacing and knowledge of sequential art. The best character moments work in a kind of trickling, downward spiraling motion. The second page of Steve and Diana’s romantic chatter seems to reduce time between panels as it continues on, almost with a sense of rolling momentum that naturally guides the reader’s eyes through the sequence. Then there’s the scene with Bruce talking to Alfred in the Batcave: Sharp positions Bruce’s muscular figure towering the whole left side of the page and the rest of the sequence seems to trickle down from the side of his magnificent figure. But my personal favorite occurs when Cernunnos Cernach leads Diana through the abstract hills of Tír na nÓg. The exposition is broken up cleverly by Sharp having the pair traverse downwards through an ornate, Celtic framework that acts as panel bordering over the environment. It’s a beautifully constructed page and embodies the thematic content of the issue.

Coloring here is done by Romulo Fajardo Jr, and has a lovely naturalistic feel throughout the tale. Fajardo Jr. is able to convey the vibrant colors of Celtic realm without feeling synthetic, from the first two pages, you can see there’s still a muted tone but colors are accented when they are thematically appropriate (the knight’s green chainmail, Cernunnos Cernach’s autumn-toned beard). But there’s also a great usage of color to convey sequence too. Fajardo Jr. uses deep reds in the background of Diana and Steve’s intimate scene, and as the climax builds to the Celtic god appearing, the reds become more evident and bright, and explode with radiance when the moment happens. What I find really pretty in the middle of the issue, when Cernunnos Cernach conveys the situation in Tír na nÓg to the pair, most of the page is black, save for the deity’s bust appearing partially. Fajardo gives him a very ethereal glow, almost as if part of the figure is glittering away to the dark, and it works great in sync with Sharp’s natural grandeur.

“The Brave and The Bold: Batman and Wonder Woman” #1 shows it’s off to a good start. Sharp has built a great mythology for the Celts within the DC universe, and weaves it in with the modern superhero themes almost seamlessly, despite some odd characterisation and dialogue here and there. Of course, however, the art side is sublime, with excellent sequential work, great aesthetic, and beautiful coloring. Come for the premise, stay for the wonderful visual display.