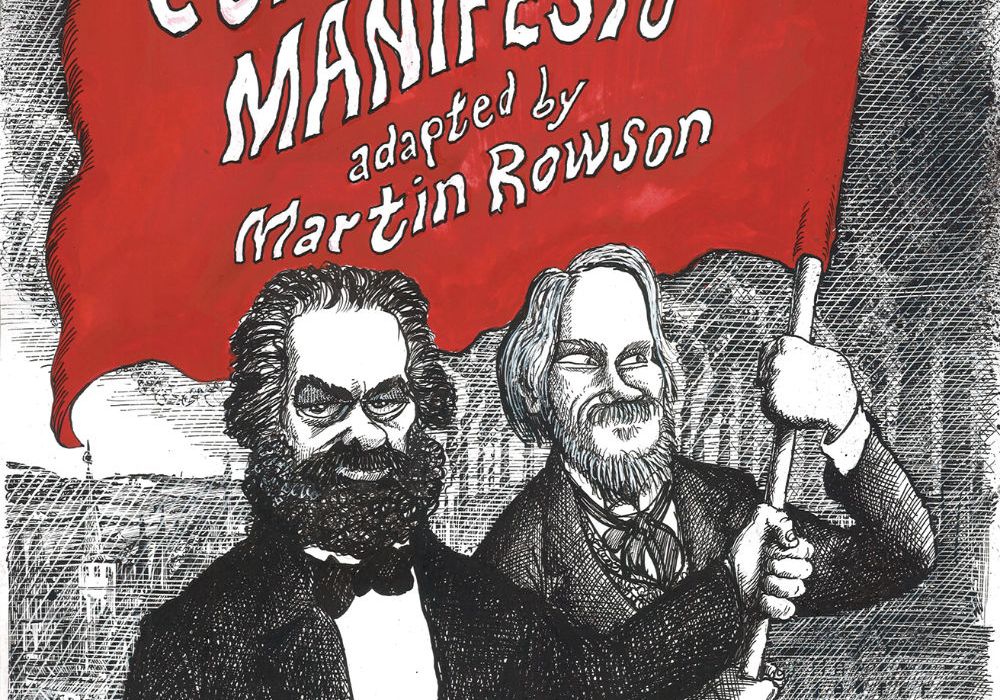 As a political cartoonist for The Guardian, Martin Rowson mocks the figures of current politics. Now for the 200th birthday of legendary leftist thinker Karl Marx, Rowson turns his eye to 170-year-old politics, adapting Marx and Engels’s “Communist Manifesto” into a playful, strange, grotesque, and relevant graphic novel. Using the original text, and foregrounding Marx as a Scott McCloud-esque guide through the text, Rowson plays with different styles of presentations visuals for each chapter, always remaining lively and a little weird. 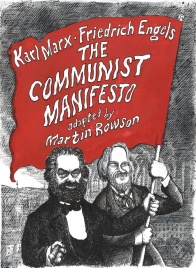 Cover by Martin Rowson
Written by Karl Marx & Friedrich Engels
Illustrated by Martin Rowson
Published in 1848, at a time of political upheaval in Europe, Karl Marx and Friedrich Engels’ Manifesto for the Communist Party was at once a powerful critique of capitalism and a radical call to arms. It remains the most incisive introduction to the ideas of Communism and the most lucid explanation of its aims. Much of what Marx and Engels proposed continues to be at the heart of political debate in the 21st century. It is no surprise, perhaps, that The Communist Manifesto (as it was later renamed) is the second bestselling book of all time, surpassed only by The Bible.

The Guardian’s editorial cartoonist Martin Rowson employs his trademark draughtsmanship and wit in this lively graphic novel adaptation. Published to coincide with the 200th anniversary of Marx’s birth, The Communist Manifesto is both a timely reminder of the politics of hope and a thought-provoking guide to the most influential work of political theory ever published.

Before Marx’s classic words, when opening the comic “Communist Manifesto,” Rowson first gives us his forward, where he contextualises the original “Communist Manifesto” as well as his relationship to it. This is all fairly easily found information; Rowson wrote a piece for the Guardian that is very similar to the text of his forward. The interesting thing about this introduction is what’s going on at the bottom of the pages. Rowson opens his forward with an image of Marx as a centaur in ancient Greece, didactically pointing a pencil and holding a Hegel book. Over the rest of the forward, Rowson draws ‘All History Hitherto.’ What starts as simple farming quickly becomes a hierarchy; as piles of people are crushed below a few grand bishops, knights, and lords. Eventually, the downtrodden are flung lower into a hellish abyss, their only hope the dirty, inhumane factories of early capitalism. But a spectral wave is coming, a spectre that is haunting Europe, the Spectre of Communism.

This is where the first chapter, ‘Bourgeois and Proletarians’ can begin, as Rowson transitions his history into a series of intricate, crudely hellish, bloodily grotesque, steampunk splash pages, over which Marx explains the rise of two distinct classes under capitalism, the rich bourgeoisie and the working proletariat. At one moment, as Marx describes the capitalist bourgeoisie gaining political dominance over the aristocratic nobility, the large machinal robot representing the bourgeoisie appears to have Big Ben (or, more accurately the Clock Tower at the Houses of Parliament, of which Ben is the Bell at the End) for a penis, which the robot is masturbating.

In the second chapter Rowson changes tact, as Marx takes the stage at the open mic night at the ‘Kapitalist Komedy Club’ to talk about more concrete Communist demands. Here Rowson moves away from the splashes, these pages are simpler grids in three tiers as Marx performs to Bougie hecklers. Chapter 3 sees Marx commenting on various other leftist schools of thought. Displayed by Rowson as series of statues that Marx gives several dismissive and rude gestures to, this is the closest Rowson gets to his bread-and-butter editorial cartooning in “The Communist Manifesto.” The final chapter of Marx and Engels’s original text is a call to action, ‘the proletarians have nothing to lose but their chains. They have a world to win! Working men of all countries unite!’ Rowson condenses this to two pages of dense, chaotic panels of preparation for revolution (Marx arms himself with a copy of this manifesto with a gun barrel attached), before a final splash of energy.

Rowson takes familiar imagery of Victorian industry and early Communist revolutionaries and exaggerates them into a deformed surreality. The capitalists are the most obviously monstrous, a mix of unhuman red faces, fang-like teeth, and rims of top hats casting their faces into shadow. They are the villains that Marx draws, after all. The workers also become aberrant, as their labour is exploited, and they are alienated from its product. Their humanity stripped away by capitalism. This point is clear in the original text, but by adapting it visually, Rowson adds a more visceral element to the inhumanity of alienated, capitalist labour.

The exaggeration is just limited to Marx’s targets. Rowson takes some playful jabs at Marx and Engels. Throughout “The Communist Manifesto,” Rowson renders Marx with this sinister, smug grin, as he is followed by a sycophantic Engels who’s desperately clinging onto a red flag. Clinging onto, with certainty, their ideological purity. At the end of the book, Rowson leaves us with a reminder of the failure of the Soviet Union, followed by a prediction of corporate surveillance state which Marx’s spectre still haunts.

Rowson has taken the second most sold book of all time, a book that he (and I) first read as a teenager, a book that maintains a certain prescience but also a dated dryness, and breathed new life into it. Throughout, he mixes and remixes his style and form to keep momentum. Showing an ability to playfully render disparate images, people, and ideas in exciting ways across “The Communist Manifesto.”