Music and comics – two amazing things that (don’t always) go great together. “Phonogram,” in its earlier incarnations, combined those two passions of mine quite well. With “The Immaterial Girl,” Gillen and McKelvie have added a third element to the mix – music videos. Does video kill the “Phonogram” star? Keep reading for our spoiler free review. 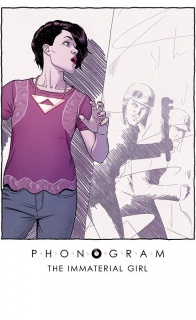 You will never look at A-Ha’s “Take On Me” video in the same way ever again.

Forgive the slight non-comics tangent – I have a complicated relationship with music videos. As a man in his 30s, I don’t remember a time before videos. For as long as I can recall, most songs I heard on the radio, I would then be able to see represented visually, sometimes wonderfully (“Buddy Holly” by Weezer), sometimes terribly (“Dancing in the Streets” by Mick Jagger and David Bowie). For better or worse, many of the songs that were released during the formative years of my life are forever, and inseparably, linked to images. Videos made a lot of careers, and took a lot of careers into the gutter as well.

That said, I think if I had my druthers/a film degree, being a music video director might be my all-time dream job. Taking great music and creating a visual accompaniment to it sounds like a perfect day at the office to me.

All of that is said, because “The Immaterial Girl” is very much rooted in the power of music videos, and Emily Aster (and her other personality, Claire) gets the focus. Half the book takes place ‘behind the screen,’ where Claire had previously been trapped, and where Emily now finds herself, running through a-Ha’s “Take on Me” video. Visually, this is an absolutely stunning sequence. Jamie McKelvie manages to perfectly match the look and tone of the classic video – as well as the other videos that Emily finds herself in, but I promised no spoilers. McKelvie doesn’t get enough credit for being one of the most versatile artists working today. His eye for design and his perfectly tuned stylistic barometer mean that his work is never overwrought or anything but perfectly composed.

When not behind the screen, this issue is a little less successful, if only because (as Gillen noted in the backmatter for issue #1) this is likely to be the most read “Phonogram” miniseries, the characters can seem a little…how do I put this…remote? If you’ve read the prior two volumes, it is nice to be re-acquainted with the cast of characters that we’ve read before. Issue #1 did a nice job of attempting to contextualize the characters for new readers, but this installment is more of a mixed bag.

Part of that is that the core of the series is the intersection between music and magic, and the ‘behind the screen’ elements really double down on that, whereas the ‘real’ world section isn’t. Yes, the characters are all phonomancers, and so that is part of what makes them who they are, and yes, a lot of the action involves a coven of phonomancers, but outside some references to various artists/songs, there really isn’t anything in this issue, outside of the videos, that is musical, or magical, in nature.

One interesting element is the idea of Kohl being a retromancer, and this series is focusing on classic 80s videos, an inherently retro subject matter. Part of the appeal of videos like “Take on Me” is that it reminds us of when we first saw them, and the innocence and joy that were part of our younger lives. In a way, McKelvie and Gillen are retromancers themselves, using the magic of this book to bring us all back to a time when these videos meant something more than nostalgia to us.

While the prior installments certainly were looking back on music (they couldn’t really look ahead, could they?), this is the first time that the focus has been so squarely in not just the past, but on a (relatively) dead format. The big budget, ‘event’ music videos just don’t exist anymore, and in many ways, this mini feels like both a celebration of that phenomenon, but also an elegy for it. In a way, this is much more like “Rue Brittania,” which used Britpop as the framing device for the series, than “The Singles Club,” which were standalone tales, all of which took place on the same day. However, the passing of Britpop wasn’t treated in the same way – this is far more reverential, perhaps because Gillen was a relative child during the 80s video era, whereas he was a more active participant in Britpop culture.

The reliance on the past also allows the book to feel a little more timeless than prior installments, as everyone gets the big references, whereas many folks reading “The Singles Club” had never heard of the Pipettes, for instance. The imagery, especially on the covers, is so specific to those early-mid 80s MTV years, that just about anyone between the ages of 25 and 50 have those reference points. Rightly or not, Elastica or TV on the Radio just couldn’t do that.

And perhaps that is another reason why this will be the most read mini of the batch; because we all have our emotional attachments to the music videos of our childhood, whether or not they coincide with Gillen’s childhood or not. This is the first volume of the series that isn’t about a specific type of music, but rather a delivery system for that music. So, while some #millennials might still be too young to grasp the import that videos at one point had, they can still appreciate what videos were, and are, capable of doing.

Final Verdict: 7.3 – While maybe a little tough for an outsider to get into, and maybe a bit dragging in the non-video sequences, this serious is building to something really special, and continuing one of Image’s most underrated, but indelible, series.