This is a review I’ve hoped to do for a long time. I was among the generation of kids who grew up on the Hot Topic-esque gothic fads of the early 2000s that heralded films like The Crow as untouchable masterpieces and while I loved and do still enjoy that film, it does not hold a candle to the moment I tracked down and read James O’Barr’s original comic.

Why don’t you join me as I take a look back at what makes “The Crow” so special? 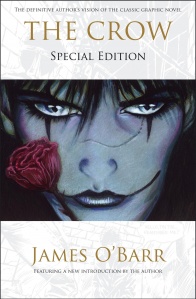 When James O’Barr poured the pain and anguish of a personal tragedy into the drawings that comprise The Crow, his intensely cathartic story of Eric—who returns from the dead to avenge his and his fiancée’s murder at the hands of a street gang—resonated with readers around the world. Now, the illustrated tale that became the “thrilling” (Los Angeles Daily News) and “spectacular” (Chicago Tribune) screen triumph is re-released in an expanded version the author originally intended, complete at last with:

This is The Crow like you’ve never seen it before—the powerful journey of an avenging angel and a celebration of true love . . . as fierce, intelligent, and unforgettable as when it was first conceived.

The story of “The Crow” is one steeped in tragedy. From the death of “The Girl Who Would Be Shelly”, as James O’Barr calls her, that sparked the inspiration from the story to the untimely death of Brandon Lee on the set of the film adaptation, this is a story marred by death and sorrow. However, it’s also a story that, I think, has been overshadowed by that tragedy in some ways. While the film adaptation directed by Alex Proyas became a cult hit and cultural touchstone for a generation of kids (of which I am one), the comic it was derived from always seemed lost in the annals of independent comic book history. More than twenty years after its original publication, in 2011, James O’Barr returned to his seminal work to expand it to fit it to his original vision of the story and I’m here to tell you why “The Crow” is one of the greatest comic books of all time.

That’s a quite a heady way to open a review, I know, but I believe there’s a lot in “The Crow” to back it up. “The Crow” is a beautiful book. It’s violent, savage, raw and emotional in its exploration of loss and trauma and grief, but it’s beautiful nonetheless and that’s largely due to James O’Barr’s art. “The Crow” was O’Barr’s first comic and for a first effort, this is stunning. Illustrated in black and white, O’Barr’s artwork is stark and harsh and raw, often featuring panels enveloped in black ink with the white appearing only as a highlight and the gritty details of the noir-tinged world given form with harsh cross-hatching. It gives much of the book a very abrasive quality; the art isn’t nice and fluffy instead it is brutal and punctuates the violence through out the book.

It’s of no doubt that James O’Barr’s artwork on “The Crow” is an impressive achievement, one of the charms of it is the inconsistency in his depictions of the world. Eric’s features change drastically from angle to angle and definitely shows that this is the first work from an artist, but that’s also why it works. This isn’t a story that a seasoned artist dreamed up and put to paper to tell it just for the sake of telling it, this is a tragedy that actually happened to O’Barr and the only way for him to process it was to put ink to paper. For that reason, the raw and very independent style of the comic that feels at times disjointed and stilted feels completely right considering the mindset of its creator.

While the original comic of “The Crow” was published by Calibre Comics in four separate issues, I genuinely believe that it is a book that reads best collected and this Special Edition collection is the best way to experience the comic. While the crux of the story is told through each of the book’s chapters as Eric hunts down each of the men responsible for the attack of he and Shelly, these scenes are often bookended by sequences of Eric’s time alone in the house he and Shelly lived it. It’s these sequences that really elevate the book as O’Barr uses this time to allow Eric to reminisce on the beauty of his time with Shelly and his love for her, often causing him distress because of his grief. These sequences stand out against the rest of the book through O’Barr’s use of white space on the page as well as mixed media in the art work.

Many of the flashbacks and reminiscences that Eric experiences in the sections are actually painted by O’Barr as opposed to the more traditionally inked pages that make up The Crow sections. This gives these scenes an overtly dreamlike quality and contrast nicely with the “real world”, as it were, as Eric regresses into his memories in order to fuel that sorrow and anger that drives his mission of revenge. These sequences, that show the relationship between Eric and Shelly, are the heart of the book and give context and depth to Eric’s anguish and elevates his time as The Crow above mere bloodshed to something closer to a metaphor for grief.

In the book, O’Barr makes it clear that The Crow cannot be harmed by the violence of others, but the cuts he makes in his own wrists do not close. He paints his face white as the mask of a harlequin, a rictor grin in black lipstick. He is the facade of normalcy that hides a deeper, darker depression. He is the mask of outward happiness that hides his anguish. He cannot be harmed by the words or actions of others, but only by his own thoughts and his own mind. He is the avatar of grief, both O’Barr’s as he processed a real life tragedy and the readers as they experience it through the attack on Shelly and Eric.

“The Crow” is a poetic look at love, death, grief, revenge and forgiveness. It’s a book that combines the melancholy of The Cure or Joy Division with the catharsis of Death Wish and gives an intimate and unflinching look into a very personal trauma. It can be stilted, sure, due to it being James O’Barr’s first work, but the technical shortcomings are more than overshadowed by the long, intense look at a very dark part of the human soul. Simply put, “The Crow” is a beautiful work of art and should by no means be ignored or forgotten.