Faith Erin Hicks closes her “Nameless City” trilogy in spectacular fashion. This is not a book to be missed. 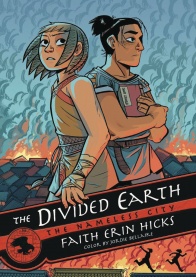 The Nameless City―held by the rogue Dao prince Erzi―is under siege by a coalition of Dao and Yisun forces who are determined to end the war for the Nameless City once and for all. And the people of the city―the “Named”―are caught in between.

Meanwhile, Rat and Kai must infiltrate Erzi’s palace and steal back the ancient and deadly formula for napatha, the ancient weapon of mass destruction Erzi has unearthed―before he can use it to destroy everything Rat and Kai hold dear!

In her third and final installment in the Nameless City trilogy, Faith Erin Hicks delivers a heart-thumping conclusion. With deft world-building, frantic battle scenes, and a gentle and moving friendship at its heart, The Nameless City has earned its place as one of the great fantasy series of our time.

Back in the first volume of “The Nameless City,” there was a sequence very early in the book with Kai walking through the city streets with his father explaining the history of the city and its many peoples. It’s a sequence designed to set the stage for the story to come, not just for the first volume, but for its sequels, “The Stone Heart” and “The Divided Earth,” too. This is one big seven-hundred-page story split into three parts, so it’s impossible to review “The Divided Earth” without talking about “The Nameless City” trilogy as a whole, because most of the book’s payoffs are tied to set-ups in the previous two books, and this book is practically all payoff.

Also, while I kept my previous reviews spoiler free, since this is the last book of the trilogy, I’m going to be diving into heavy spoiler territory here. You’ve been warned.

The prologues for “The Nameless City” and “The Stone Heart” focused on two traveling companions, through which readers learn about history of the City. For “The Divided Earth,” the prologue abandons the travelers and goes back further, to the the time of the builders of the City, when the City’s leaders decided to destroy all knowledge of the Divided Earth (napatha), the tool that’d been used to make the tunnel through the mountains. In the prologue we see how one book survived the purge and made its way to the Stone Heart, and in the process we’re led to wonder if the City leaders could ever be wise enough to choose to use the napatha as a tool to build, instead of an instrument of destruction.

I’ve seen and read so many stories where some powerful technology ultimately gets destroyed to save everyone and it’s often treated like the only valid solution, rather than the stalling tactic it so obviously is. It’s the Dismantled MacGuffin trope, and it’s often used as a cowardly fix to avoid more narratively complex questions or to reinforce the cynical idea that human nature is too selfish to change. Personally, I find the trope lazy, and to have Hicks call attention to this in the prologue immediately caught my attention and reassured me this wasn’t going to end with the napatha formula destroyed. Hicks is aiming higher than that.

It’s not just the prologue that sets “The Divided Earth” apart from its predecessors. This is the final book, and there’s a notable change of pace and scale. While Hicks’s work is known for character-driven drama drawn out with reaction panels or hesitation panels―she likes to slow things down―“The Divided Earth” has Kai and Rat break into the Imperial Palace on page 100, beginning an action-packed finale that plays out over the next 140 pages. Hicks dives headfirst into intercutting action scenes with Kai, Rat, and the invasion force led by Kata (Kai’s mother). All the environment work she and colorist Jordie Bellaire put into the previous volumes pays off here. We’ve spent so much time in the Imperial Palace throughout the books that we have a strong sense of the space. Hicks uses her environments a lot in the action too. This isn’t just characters in an open space, kicking and punching. Rat and Kai are going up against opponents more skilled and much stronger than they are, so all that parkour roof running they spent so much of the previous books developing becomes their primary tool for staying alive.

Hicks has also put a great deal of effort into making sure the action reads clearly and swiftly. Western comics naturally read left to right, so forward momentum and progress is associated with traveling left to right. Hicks is very conscious of this, so whenever a barrier to progress shows up, it emerges on the right or reverses the scene action. The result is action you feel before you consciously process it, which is an impressive feat on its own, but on top of that Hicks still finds ways to compose her panels with a character focus, no matter how much action is unfolding. She takes the approach she uses for in scenes with two characters conversing, and applies those principles to these big action sequences, which makes the book feel like the best kung fu action movies. There’s an intense emotional quality to all her action, and she uses proximity and speed like a volume dial for intensity. I love that the confrontation between Rat and Mura runs over thirty pages. Hicks ups the stakes and the scale, but she never loses sight of her characters. If anything, her focus on character becomes even more pronounced.

Speaking of composing panels for character, “The Divided Earth” has some great stuff going on. There’s a few scenes with Erzi horrified by what he’s doing, wanting to back out, and Hicks seems to take every opportunity to frame Mura so that she’s both figuratively and literally on his back. 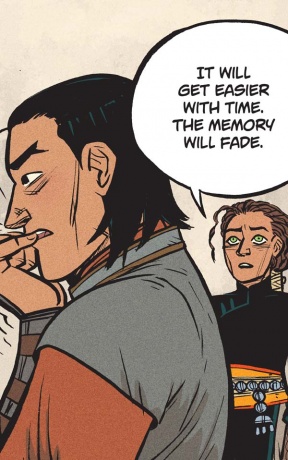 As the story progresses, she takes this idea further as Erzi succumbs to Mura’s poisonous words and gives in to his darker impulses. Hicks starts framing Mura on Erzi’s shoulder, like a devil whispering in his ear. 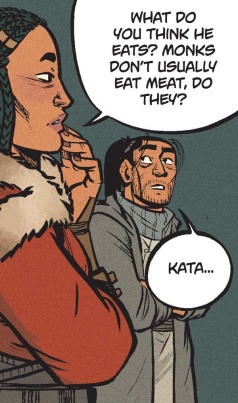 Then look at the way she composes scenes with Kai’s parents, Andren and Kata. The two are rarely in opposition with each other throughout the story, and frequently work as a unified front. Hicks reinforces this visually by having them stand next to each other when they’re talking. They are figuratively and literally on the same side. On the few occasions they disagree, suddenly they start talking face to face, framed in opposition with each other. You can read Hicks’s work without speech bubbles and you’d still have a good sense of the character dynamics of even minor characters.

Incidentally, Kata ended up being one of my favorite new elements in “The Divided Earth,” and Hicks uses her with great efficiency to teach us about Dao culture and to reveal previously hidden aspects of Andren’s personality. Again, Hicks uses the visuals to tell us about the dynamic between Andren and Kata when she makes Kata the taller of the two. Plus I love that Andren has to be on the tips of his toes to kiss Kata―that was a delightfully cute touch. And it was refreshing to have this dynamic exist between Kata and Andren without having Andren feel in some way emasculated. He loves his wife, he’s proud of her, and he doesn’t feel diminished by her achievements―any doubts he feels about his choices, he shoulders as his own.

This is another thing Hicks does exceptionally well. When we learn something about a character, we’re rarely learning just about that character. She uses her characters to teach us about the world and the other characters in it. This is most clearly seen in Kai and Erzi, and Rat and Mura. When we learn about Rat’s past, we’re given an insight into Mura’s and vice versa. Erzi and Mura are dark reflections of Kai and Rat. With the Rat and Mura it’s especially obvious (I mean the characters literally call it out and it’s a point of conflict), but this dynamic has permeated the trilogy since the beginning, working in tiny ways to tell us so much more by using characters as proxies for each other.

It adds weight to character choices, like when Kai leaves the City for three years at the end of the book. He loves the City and clearly doesn’t want to go, but because he loves it, he must let it go. Throughout the trilogy, Erzi was faced with the same choice and he clung tighter to the City to the point that he was practically strangling it.

“The Nameless City” trilogy ultimately has faith in people. Hicks began the book with a prologue that featured the Dismantled MacGuffin trope, and in the end Rat and Kai are faced with the same choice. A lesser writer would’ve taken the easy way out and had the napatha formula ruined by water or had Kai and Rat agree that for the good of the City it was better gone and destroy it. Hicks gives the people of the City a chance to rise to the challenge of living with the napatha formula. She doesn’t explore how they’ll deal with that―that’s not what the story is about―but she demonstrates their capability in the Imperial Palace siege sequence, when Dao and Yisun soldiers fight side by side, when the Named come to their aid, when the city guard drop their weapons and stand in unified peaceful protest with the residents of the City. Hicks doesn’t give us the answer for how these people will deal with napatha, but she shows us a strong foundation on which that future will be built.

The heart of “The Nameless City” trilogy is Rat and Kai―or rather Setu and Kai―and their love for each other. “The Divided Earth” doesn’t really challenge that dynamic; that was the job of the previous books. Instead, it deepens the connection. One of the most moving scenes in the book is when Setu welcomes Kai home to the Nameless City, and reveals the words she says were the ones her father used to say to her mother. It’s an incredibly intimate way to say “you belong here.” 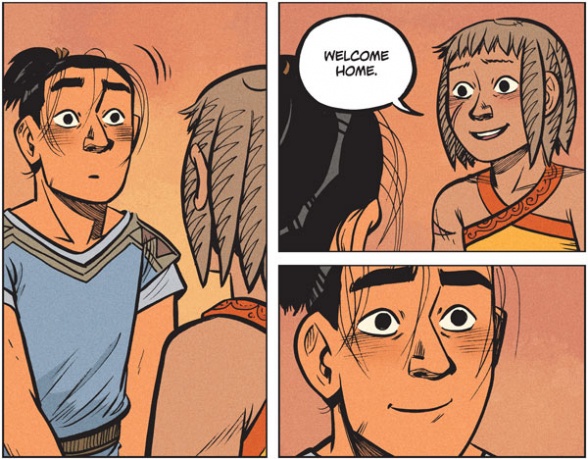 Setu doesn’t tell Kai her real name though, because it’s the last thing she has left of her parents. That connection between her name and her parents is where I find the resonance in the scene much later in the book when Setu finally does tell Kai her real name. It’s more than just letting down that final barrier between them; it’s Setu’s way of telling Kai that he is her family.

Hicks could’ve ended her book a few pages earlier with Kai and Setu saying goodbye before Kai has to leave the city, wrapping things up with his promise to return, and that would’ve worked. I’ve often heard it said of various stories that they’d work better without their epilogue, but I don’t think that’s the case here. “The Nameless City” trilogy is stronger with it. The simple act of Kai returning, and he and Setu sharing an embrace as he’s welcomed home, is the perfect note to end the trilogy on. After all the conflicts they’ve been through, this is what they were fighting for: home.

Final Verdict: 10 – “The Nameless City” trilogy is an absolute triumph.