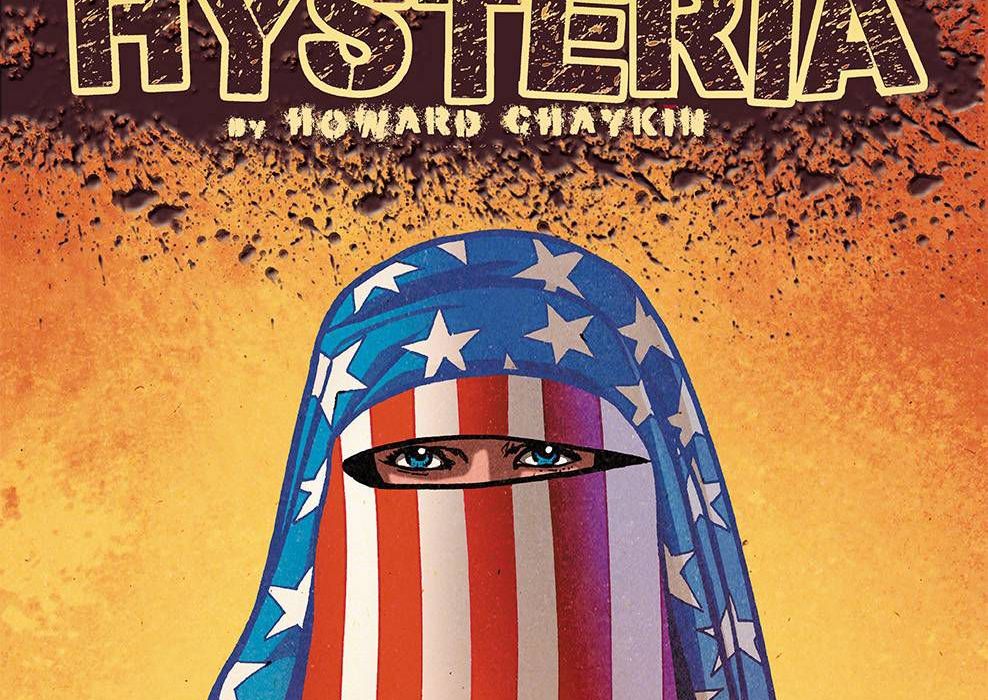 Comic creator Howard Chaykin isn’t one to shy away from a little controversy. In fact, he actively courts it. A little too actively, perhaps. In advance of his latest project he said, “”Black Kiss” was banned in the UK and Canada – “The Divided States of Hysteria” may very well get me arrested here in the good ol’ USA.” In the end, perhaps, but after its tepid debut issue, censors may not even notice that the book has been released. 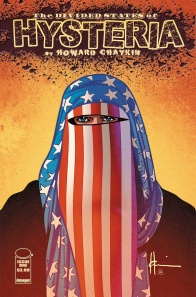 On paper, the central premise of “The Divided States” is supposed to sound extreme, but it’s certainly well within bounds of pretty typical comic book fare. The president and his cabinet have all been assassinated, the country is in chaos, a terrorist attack is imminent and everyone is on edge. Frankly, it’s a plot that wouldn’t sound out of place in a super hero book from either of the Big Two or any other publishing house for that matter. The burning questions, then, are when and where terror will strike, what form the attack will take, whether anyone can stop it in time, and what will happen if they don’t. The clock is ticking, or so it’s implied, though most of the characters we meet seem oblivious to current events and simply go about their normal daily business — which is apparently mass murder?

Indeed, the body count is high, and along with that there’s plenty of gore (often in the form of slit throats or exploding heads), not to mention copious sex, the requisite nudity that requires, and a near steady stream of f-bombs. The intent is clearly shock value – to show an unprincipled, self-absorbed culture without a moral compass that’s descended into the abyss – but for now, that’s where it plateaus. There’s no real hook to pull you in and no clear protagonist to root for. Instead, we get a hurried roll call that briefly introduces a half dozen over-the-top anti-heroes, a sea of visual clutter, tangled narrative threads, and rapidly shifting points of view.

Turn to almost any page and you’re immediately bombarded by an unwelcome visual assault of jumbled information. Surveillance drones fill the sky, the tops of panels are bordered by tickers of seemingly random alpha-numeric characters, and greyed-out social media posts punctuate the layout, insinuating themselves into the story whether you want them to or not.

On the one hand, I get it. Chaykin is deliberately trying to mimic information overload, forcing us to curate and interpret endless streams of data in an attempt to make sense of it all. The obvious problem with that, it’s a little too much work to fight your way through it all and in the end it’s more distracting than effective. When they’re rendered cleanly, the characters and settings are vivid and engaging, but Chaykin’s distinctive, often quirky style gets lost in the shuffle, more like an afterthought than the driving force. Instead, page layouts focus on simulating our screen-obsessed lives and isn’t that a huge part of what we’re trying to escape when we sit down with a comic book?

The lettering, too, gets confusing. Letterer Ken Bruzenak does an admirable job, employing variously colored drop shadows, as well as a blue pixelated background for the main narrative voice, but ultimately he’s unable to keep pace with Chaykin’s non-linear writing style. Narratively, Chaykin tries to weave together the internal monologue of a central, unidentified narrator (or is it a third person, omniscient narrative voice?) with the individual voices of several other key characters. Unfortunately, this early in the game, it’s all just muddled. There’s not enough context yet or familiarity with this world for us to distinguish one voice from the other.

Colorist Jesus Aburtov, on the other hand, does some exceptional work, especially in the brief Vegas scene where lurid magentas and pinks dominate, perfectly underscoring the desperate seediness of it all. In several other scenes, cheery sky blues and sun-kissed yellows nicely contrast the mayhem and violence that follow, creating a great dynamic between brief moments of calm stillness and utter chaos. But let’s be honest: when was the last time you bought a comic book purely for the coloring alone?

Image’s solicitation called “The Divided States of Hysteria” “a pulls-no-punches, dystopic suspense story about the dramatic downfall of the most formidable and globally far-reaching government the world has ever seen.” It’s an utterly grandiose statement about what is meant to be an in-your-face high-concept book. Unfortunately, after the first issue, at least, that promise remains unfulfilled. In fact, the most dramatic moment consists of a single word on the bottom of the final page: BOOM. It’s chilling, actually, and hopefully the start of the real story to come.

Final Verdict: 5.0 One issue into the run, there’s still a long way to go and plenty of time to recover, but this inauspicious debut certainly won’t win over any fans. This is a book to keep an eye on, for sure, but this issue doesn’t do much to get things off the ground.