Like House Of Cards by way of David Lynch, “The Eighth Seal” #1 is a character-driven political drama with just a hint, a tinge of deeply unsettling psychological horror by James Tynion IV and Jeremy Rock.

If that’s of any interest to you and you’re anything like me, you’re going to want to keep reading for our spoiler free review of the issue. 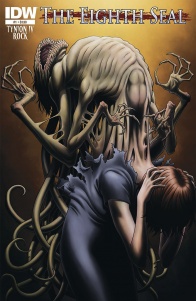 Written by James Tynion IV
Illustrated by Jeremy Rock
One woman’s visceral nightmares bleed into reality as she struggles to live in the political spotlight. Is she losing her mind, or do these visions hold some darker truth?

In prepping for this review, I was trying to rack my brains because I was sure I’d heard about “The Eighth Seal” before. Turns out, this is the print version of the series by James Tynion IV and Jeremy Rock that debuted on Mark Waid’s digital comic platform, Thrillbent. If you, like me, missed out on that and you’re a fan of horror comics, you should definitely not miss out on this print version as Tynion and Rock put together a jaw droppingly good debut issue that blends character drama, political drama and incredibly unsettling psychological horror into a package that will leave you breatheless and wanting more.

“The Eighth Seal” #1 is a quiet, slow burn of a comic. Its focus is on introducing the character of Amelia, the First Lady, and the visions she’s been having. While Tynion and Rock hint at larger elements at play, the comic rarely strays from Amelia’s perspective and ensures that we get a look into the troubled landscape of her mind and the stress she’s been under as part of her position. This plays into Tynion’s skill at writing characters as already the issue is filled with a diverse cast of distinguishable, memorable characters who feel fleshed out. The core of these characters is, obviously, Amelia and the first issue does something interesting in that it allows itself to slow down and really focus on her and her emotions. The only sense of plot here is very character-driven and is about the introduction of the visions that have been plaguing Amelia and the way these need to be covered up as fainting spells by the White House staff.

Tynion and Rock wisely avoid cluttering the issue with any elements that aren’t directly tied to Amelia, focusing instead on giving themselves to have scenes like the one in the middle of the issue that has Amelia alone in a bathroom confronting and trying to deny the existence of the grotesque, monstrous form that is central to her visions. It’s dark, somber and incredibly atmospheric and Tynion and Rock go out of their way to show the toll something like this has taken on Amelia while establishing that the vision might not be as intangible as Amelia thinks. It’s unsettling and that’s down to a combination of Tynion’s excellent writing which shows how vulnerable Amelia is to what plagues her and of Rock’s art which combines a very grounded, realistic style with one of the most grotesque monsters I’ve seen in a comic this side of “Colder”. It’s honestly the scene that makes this entire issue worth checking out and is a perfect exemplar of the slow, atmospheric focus this comic has.

Rock’s grounded, realistic style of art is honestly perfect for this series. Reading the issue in print is a little strange as you can see where Rock used insert panels for effect if you were to read it digitally through Thrillbent, but it’s not noticeable enough to break the flow of the page. The majority of the comic uses a very conventional layout style, lots of square and rectangular panels that emphasise how normal everything should feel which brings a strange feeling unease to the comic as Rock juxtaposes the relatively normal feeling setting and layout of the comic with the grotesque horror of Amelia’s visions.

This sense of unease is helped greatly by the colours thanks to Nolan Woodward, who uses a mostly naturalistic palette – albeit with a heightened saturation -, but who highlights the elements of unease with sickly greens and purples. One of the visions that Amelia has is marked by a sudden decrease in the saturation of the colours across the panels leading up to it, which helps punctuate the horror and feeling of reality slipping away, but also allows Jeremy Rock to illustrate some really horrific things without having to show them in all their gory detail. It’s a sign of the colourist and the penciller being entirely in sync with how the book should look that lets it compliment the subtle, psychological horror of the script.

Overall, “The Eighth Seal” #1 is the kind of first issue that already knows it has a niche target audience – that small overlap between people who love pyschological horror, people who love character-focused drama and people who love political dramas – and so it goes after them whole hog. The focus here is entirely on Amelia and the introduction of her story and her visions and so if that’s not something that’s of interest to you, there’s not much else here for you. If that does interest you, however, you’re in good hands as James Tynion IV, Jeremy Rock and Nolan Woodward pull out all the stops to create a sense of horrific unease that’ll give you chills.

Final Verdict: 7.5 – A strong debut that knows exactly what it wants to be, but it’s likely that you’re only going to be into this comic if you’re already on its wavelength.