‘Who is Casanova Quinn?’ And why does madness seem to follow him wherever he goes? The mayhem of a life he can’t remember seems intent on bleeding into Quentin Cassaday’s world, whether he wants it to or not. 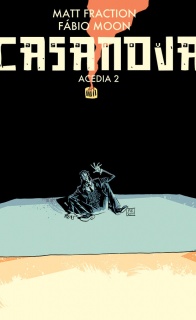 Tensions in Los Angeles continue to rise as Quentin Cassaday, aka Casanova Quinn, dives head-on into the mystery of Emil Boutique. Meanwhile, CHABON and BÁ continue their whirlwind tour of the Casanovaverse.

Full disclaimer: I am a huge fan of the three previous “Casanova” collections. The mind-bending, multiversal romps that were so full of life and character captivated me from the first few pages. However, so much of that enjoyment had to do with the inimitable character of secret agent Casanova Quinn that I was a little worried when I opened the first issue of “Acedia” and realised that Cass had become an amnesiac. But underestimating the storytelling prowess of creator/owner Matt Fraction is a most unnecessary way to spend my time and, as is the case with almost everything else he’s producing at the moment (works as varied as “Sex Criminals” “ODY-C” and “Satellite Sam” to name but a few) his latest foray into the world of Casanova Quinn is the outpouring of an artist at the top of his creative game.

Issue one of “Acedia” was a suave, self-assured re-introduction of Cass’ situation that oozed swagger. It was both a great hook for fans of the previous issues and a baggage-free, mysterious offering for readers new to the franchise. Compared to the frantic narrative style of the other chapters of the Casanova mythos this issue was a sleek, neo-noir reworking that could have been said to have started off slowly. Casanova has been working as a personal assistant/problem solver for a mysterious millionaire who lives in the Hollywood Hills to pass the time. Both Cass and his employer, Amiel Boutique, share the fairly unique position of being past-less, for the most part, and this sets the story up for a fairly straightforward mystery narrative. But, in Fraction’s hands, this tale as old as time is spun with a freshness that makes it feel brand new. The lack of an anchor in terms of backstory, combined with Moon’s oneiric artwork makes for a decidedly dream-like feeling to the story. The narration has been pared down so that there isn’t a single word that seems excessive, while the pitch-perfect dialogue seems so natural that every character feels fleshed out and purposeful. There’s next to no exposition and, as such, the task of moving the narrative forward falls to the art, a job that Moon is supremely qualified for.

It’s difficult to overstate how much the vibe of “Acedia” owes to Moon’s iconic style. His paneling is economic and intuitive, and it funnels the flow of the narrative in such a natural way that the issue all but gallops along. His eye for the most relevant subject of each scene, page, and panel, respectively means that backgrounds are hardly ever more than a few situationally indicative lines, preferring instead to focus on the characters at hand and their interactions. This choice comes into its own at the climax of the issue, an exchange that plays out in wonderfully claustrophobic close-up panels that show a gradual, almost imperceptible shift of power between the two conversational combatants until the words dry up altogether and Moon’s incredible facial expressions are allowed to truly come to the fore.

Backing up Moon’s pencils, Cris Peter’s colours continue to make this book one of the most effortlessly identifiable on the market. Every installment of the “Casanova” franchise has been characterised by a distinct colour palette of intense secondary colours, and “Acedia” is no exception. In fact, in keeping with the more streamlined narrative style, the colour choices seems to have been streamlined even further. Peter’s beautiful balance between warm oranges and yellows and cool blues and greys (seemingly the only colours authorised for the entire issue) create instant visual dichotomies and allow for swift, confident scene changes and offer the a visual anchor in replacement of a narrative one.

The hunt for the truth behind Casanova’s true identity is clearly going to be the focus of this arc but, as with the previous installments in this franchise, the supporting cast and characters have proven as interesting (if not even more so) than our titular protagonist. There was a worry that, given “Acedia”‘s more realistic rooting (in what appears to be our actual world) the lack of characters like blue-skinned siren Sasa Lisi and bandaged megalomaniac Newman Xeno might make this book a little tamer than its predecessors. Issue #2 starts to combat these fears before they even have a chance to materialise, widening the character pool with the addition of characters who offer bristling mystery and compulsive page-turning charisma. Moon’s character design is simpler, less ostentatious, but his usual panache means that these new characters are anything but dull.

In conjunction with – and more than a little at odds with – the main narrative strand of Casanova’s rediscovery, runs Chabon’s bizarre “Metanauts” additional story. Seemingly pretty disparate both in tone and story to the main narrative, Chabon’s storytelling feels more like a throwback to the frenetic style of Casanovas gone by, with a collection of mysterious, universe-hopping agents tasked with protecting life as we know it.

In a few short pages Chabon manages to take the reader on a thoroughly engaging and enigmatic journey that seems almost self-contained. But the repercussions of the Metanauts actions promise to ring through into issues still to come and Chabon’s irreverent, gutter-mouthed tone, combined with his bonkers conceit definitely justifies his pages in this issue and has me looking forward to his b-strand story with almost as much gusto as I do Fraction’s main course.

Gabriel Ba, artist and brother of Fabio Moon, provides the illustrations for Chabon’s slightly unhinged creation. His artwork is similar to his brothers but, in keeping with the less super-spy slick characterisation, his line-work is a little more scratchy, a litte more insistent, truly giving this story the feeling that it takes place in a world that is ever so slightly different to the one we see in the more prominent story.

Overall, this issue merely cements the calm, confident, and well thought out style that I’ve come to expect from Fraction on “Casanova”, a piece of work that is almost the definition of a passion project. While it’s unfolding a little less frantically than its predecessors did, I’m happy to wait for the reveals as they come, because there still doesn’t seem to be a single panel of wasted space. Fraction, Moon, and their creative team are putting out one of the most intriguing, and explorative comic books available at the moment, and I’m just happy to be along for the ride.

Final Verdict: 7.9 – Stylish, seductive, and seriously professional. This is the love-child of Ian Fleming and H.P. Lovecraft. And if that’s not something you want to read then I’m sorry, but I don’t know if we can be friends.