Talking cats, rebel girls, murder, theft, and political intrigue? Just a typical day in the Republic of Thessala with The Family running the show . . . until young Jessa gets herself into a spot that will change her world. A strong debut of a new heroine for 2017, with stunning art to make every page its own Impressionist work of splendor.  (Warning: spoilers contained herein.) 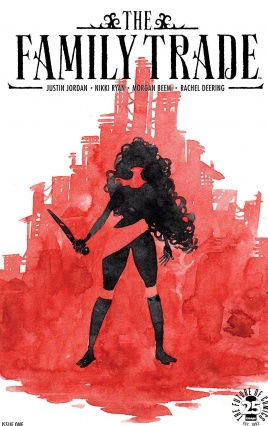 In the Free Republic of Thessala (aka “The Republic”, or “The Float”), there is no leader. There is “The Family,” a loose network of rogues who do whatever it takes to keep The Republic safe and, well, still floating (it is an island) — and that can include theft, lies, and murder. The Republic is a very strategic place for trade and diplomacy, which makes The Family necessary for its survival. Jessa is the youngest member of The Family, who teaches French by day and turns vigilante by night. Jessa peacefully lives the dual life of verb conjugation and rebel supplication — until she finds herself in trouble, with The Family’s secrets precariously exposed.  Oh, and cats can talk.

When I first heard about “The Family Trade”  it was pitched as a “family” comic, an all-ages book. I read the solicit with a raised eyebrow. How in the world would Justin Jordan and Nikki Ryan make a comic about a rogue ruling class that deals in less than legal means to their ends family friendly? Interesting concept, yes, but appropriate in content and tone for teens? No doubt this comic deals with very adult themes. Protagonist Jessa’s side job isn’t like slinging macchiatos at Starbucks, it’s crashing into bedrooms of older men to keep them quiet on a permanent basis, all in the name of The Float. Jordan and Ryan only scratch the surface of these adult situations. Jessa may be a killer, but we don’t see her do any actual killing. (Yet, anyway. The hit in these opening pages doesn’t exactly go as planned.)

I’m still trying to figure out how and why the solicit used the word “steampunk” as a description for this world.  It’s certainly fantasy with the talking cats and all, but not the definition of steampunk I know. Neither airship nor goggles or gears on mundane items in sight. A few other sites have used the term “oceanpunk” to describe this comic, which, based on the opening panels and the history lesson midway through on Thessala, would be more accurate.

Kudos as well to Jordan and Ryan for the well-done exposition and detailed history lesson on Thessala, but there are some narrative gaps that weaken the strong exposition. The solicit makes mention of a civil war brewing, but the closing pages of this comic don’t seem to hint to that, just some nefarious fascist politician finding out secrets about The Family that Jessa overhears when hiding under a carriage. That’s not a civil war, to me at least. Second, what is the point of cats being able to talk? And why is Jessa’s name never even mentioned in the book itself (I only found it out in the solicit and the afterword)? Is that deliberate so that we do not become too attached?

If I’m right on that last question, that would be a problem, because I really like Jessa. She makes this an all-ages comic. She’s a tough girl who does not suffer fools gladly, and excels at her job . . . sometimes. Coupled with her curly hair, this is Brave’s Merida all grown up. If I had a pre-teen or teenage daughter, this would certainly be in her pull list. The more strong badass women in comics who live for themselves and, all the better. One can also compare Jessa to Kamala Khan/Ms. Marvel as both these ladies fight for justice, but are also hopelessly flawed and don’t always get things totally right.

The star of this show is Morgan Beem and her art. Her pencils and inks show fine detail, and she takes the time to draw Jessa to look like a woman but not over-sexualized, and appropriately dressed for the day-to-day life of The Family. No chasing bad guys in stilettos or chest busting out of a super suit. She’s athletic but still feminine, which is no easy feat in drawing. And I’m in love with how her curly hair just flows like a mermaid.

It’s worth taking your time, lingering from panel to panel to see this fine attention to detail. In particular, take a look at panels depicting The Republic’s cityscape, zoom in to see the careful hand given to each window and building exterior. That takes patience and skill.

It’s not just Morgan’s drawing that deserves such high praise. The colors are a glorious Impressionist palette. Every page is like its own Monet painting, soft pastels that stray sometimes just outside the lines, or don’t fill in shapes completely. The hand is that of a watercolor artist, and it amplifies the sense of fantasy.  The Thessala history lesson is completely rendered in shades of sepia, as if it was straight out of a history book or a family photo album.  If you loved Emil Ferris’s art in My Favorite Thing is Monsters, or David Mack’s covers for “Jessica Jones” you will love Morgan’s artwork. Rachel Deering’s letters and layout allow ample room for the art to shine, but aren’t too minuscule that they cannot be read and appreciated (you’ll recall that was one of my problems with “Moonstruck“). The font is akin to that of notebook scrawl, and when coupled with the prose, adds the feel that this isn’t so much a comic as it is a diary.

Based on those final panels, Thessala is in for some rough seas ahead, but at least it will be pretty to view as it attempts to stay afloat. I’m sure the talking cats will provide ample commentary on the state of affairs.

Final Verdict:  7.7 – There’s some rather large narrative gaps for a debut issue that shouldn’t have been mentioned in the solicit if they weren’t going to be at least alluded to in the actual book.  That aside, high praise is due to this team for writing a heroine worthy of admiration by all ages, and giving her glorious art to match.