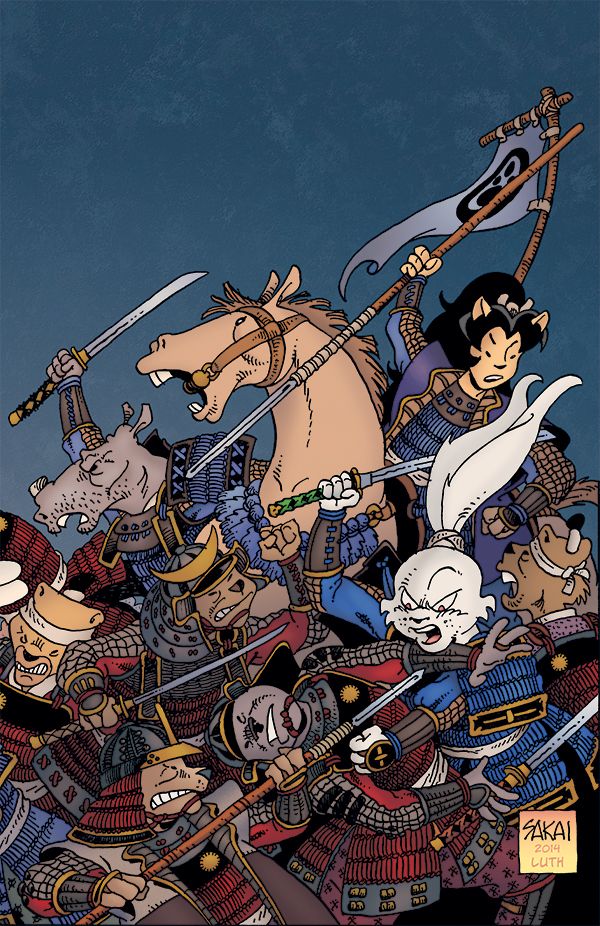 For the past 30 years, Stan Sakai’s “Usagi Yojimbo” has been one of the longest-running and most critically acclaimed creator-owned comics in memory. Now, with “Senso” #1, Sakai takes his characters twenty years into the future to face a threat the cast of anthropomorphic samurai have never seen before.

Check out our review below, but be warned of mild spoilers. 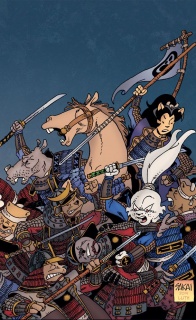 Written and Illustrated by Stan Sakai

Twenty years in his future, Miyamoto Usagi fights as a general for Lord Noriyuki, against the treacherous Lord Hikiji. In the fury of the final battle, a metal rocket crashes to earth—and inside is an enemy that neither side could have ever imagined! Witness the final fates of your favorite Usagi characters, in this all-new samurai epic with a startling science fiction twist!

If you’ve never read Stan Sakai’s classic “Usagi Yojimbo” series, that’s fine. Not good, but fine. The saga revolves around a rabbit ronin named Miyamoto Usagi and his adventures through an Edo Japan that’s pretty accurate aside from everyone being an animal of some sort. It’s a fairly simple concept, yet one that Sakai strives to make all his own through his distinctive aesthetic and storytelling style. Now, in “Usagi Yojimbo – Senso” #1, Sakai takes his cast of animal samurai to twenty years in the future to face new developments both big and small.

The meat of the issue comprises of the clash between the forces of Lord Noriyuki and the evil Lord Hikiji. And in spite of (or perhaps with the help of) the anthropomorphic cast, Sakai paints a depiction of one very gripping battle. Wide open pages of armies charging for their cause give way to smaller panels of the vicious personal clashes that give a real weight to this battle. It’s not a consequence-free skirmish meant to just look cool, it’s an all-or-nothing confrontation between rival armies made all the more serious by the inclusion of Jotaro Usagi among Lord Noriyuki’s ranks.

Jotaro (no relation) is the son of Miyamoto and his childhood love Mariko who was already betrothed to his childhood rival. Due to honor or something, they’ve never acknowledged that they both know they’re father and son. That dynamic has apparently gone on for twenty years and seems to hit the boiling point in this gigantic battle. Though this aspect of the story is brought out through really blatant exposition, it doesn’t really feel too forced. This is one of the “Usagi” plot points that’s been growing for years (decades by the time of “Senso”) and seeing what occurs here might be very pleasing to longtime fans.

And even if you’re not a fan with “Usagi Yojimbo”, “Senso” is still a great place to start. Though it plays around with the mythology of the series which is something older fans might appreciate more, the pacing of the battle and its execution in the art are perfect examples of how consistent “Usagi” has been for about three decades now. That said, the story does get derailed in the last few pages by what seems to be the actual concept of the title. I hadn’t read the solicitation or really much about the series before reading the first issue (and since this is mentioned in the solicitation I feel I can mention it here) so I didn’t know a giant spacecraft was going to crash into Earth so Usagi and pals could fight aliens War of the Worlds style.

That’s the type of concept I can get a thousand percent behind. Usagi’s been pretty dedicated to staying in Edo Japan, so seeing the character branch out like this is very exciting. Yet the Samurai vs. Aliens plot line doesn’t interrupt the issue’s major battle so much as flop onto it like the final twist in some bad fan fiction. There’s definitely an element of this being a great shock twist, but it feels like more of a robbery than anything else. The major battle is just about to go underway and then, plop, a rocket falls onto the battlefield and oops we’ll have to deal with that next issue.

With enough build-up or foreshadowing, this twist could’ve been a great escalation of the already massive battle underway, but instead it hijacks the plot so we can get to the actual point of this miniseries.

Is it my fault for not knowing what type of comic I was getting into? Yes. Yes, it absolutely is. Still, the sudden introduction of the aliens into this story opens up a lot of possibilities to be excited for in the following issues (a tie-in with “Space Usagi” seems almost mandatory).

As the series goes on and narrows down its focus to the alien invasion storyline, I feel it’ll make some pretty entertaining comics. After all, Sakai’s been putting this series out for thirty years and hasn’t skipped too many beats and I doubt he’ll fail to deliver on a War of the Worlds homage with his favorite character. Honestly, I just feel cheated out of the “Final Battle” story the issue seemed to be building to. And even if you did know what “Senso” was about going in, that might just make the whole issue feel like a redundant build to a plot twist you knew was coming.

Despite my negative attitude, “Senso” is a very well-made book. Sakai’s ubiquitous art has only been getting better and his visual storytelling is fantastic. The characters are all being pushed well out of their comfort zone which makes for an incredibly compelling read for older readers while not leaving newer ones behind. If not for the alien’s abducting the comic’s focus, I’d say it was one of the best of the week. But we still have five more issues to go and, if I’m going to be honest, a rabbit samurai fighting H.G. Wells-style Martians is the exact type of comic I need in my life.

Final Verdict: 6.8 – This comic had a great almost everything but just didn’t stick the landing. Future issues do seem more promising, however.