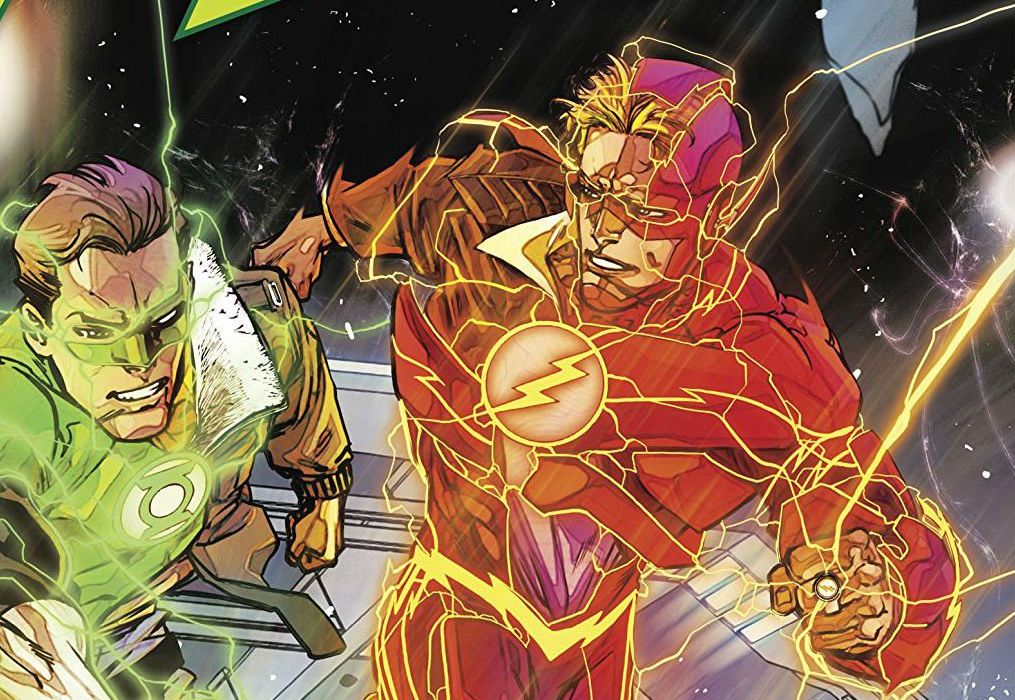 ‘The Button’ is over, but it has left more questions than answers for Barry Allen as he teams up with an old friend. How does the beginning of this new story fair? Let’s look. 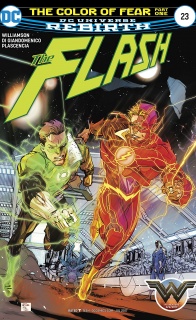 “RUNNING SCARED” prelude! Barry Allen is at a crossroads. He’s lied to the woman he loves about his life as The Flash, and a rift is growing between him and his heroic young partner. Now, his greatest enemy has threatened to strike down everyone close to him! It’s time to make a tough choice that will launch The Flash into his most incredible mission yet: a siege on the 25th century stronghold of Eobard Thawne!

With ‘The Button’ (a.k.a. “Flashpoint 2: Flashpoint Harder”) out of the way and providing more questions than answers, one of those answers being: Hope you weren’t expecting the JSA to come back sooner rather than later, we begin the next story in Joshua Williamson’s run, with original illustrator Carmine di Giandomenico coming back to tell a story of Barry teaming up with Green Lantern to face Eobard Thawne all the while attempting to deal with some of the difficulties that he has been going through.

As a premise, I’m very iffy on this. A great deal of that comes from simple timing: We’re doing another story with Thawne as the central antagonist. Really? We just did a story where he had a major presence in. I know the time travel nature of Thawne’s power makes it a little up-and-down as to what Thawne we’ll get (even the twist we get with a scene in the 25th century does make one cock an eyebrow), but there wasn’t even an issue barrier between this and the button. While this run hasn’t beat evil speedsters like a dead horse like the show has, it could very well get up to that point.

But it’s not just Thawne here. Because it’s also Barry’s birthday. We get some check-in with some of the more minor characters (including Captain Singh and Hartley Rathaway) but it is here were a good chunk of my criticism comes in. Why? Well, let me explain to you in. Vivid. Detail. Through lots of exposition to the point where it feels like one could drown in it. Yeah, this has been a problem with the book for a long while, but it only got exacerbated when you had a side-by-side comparison with Tom King’s “Batman” book, but to put it simply:

You don’t need to have Barry Allen monologuing over nearly everything.

Two separate occasions during the party were really faulted by this tendency. The first is when Barry is having a terrifying thought of the idea of Thawne killing his loved ones, including Iris, Wally, etc. It’s a harrowing set of scenes, rendered very well by Giandomenico and Plascencia, but Barry’s narration is so distracting that it hampers the emotional experience. The second is when Hal Jordan arrives and we are given a mountain of exposition on who he is. I get that there are writers that operate from the school of “every comic is someone’s first” (and that’s a terrifying thought because somewhere out there is a poor bastard whose first comic was Mark Millar’s “Trouble”) but you can cut a whole swath of this narration and the scenes would be improved. It would show more trust in your readers and respect their intelligence. Readers are willing to go along with stories, you don’t have to clamp your hand with theirs the whole way. “The Flash” isn’t the only book to have this problem, but it’s always the one where it’s most noticeable.

With all that said, Williamson does handle the Brave and the Bold well. Jordan is nowhere near as insufferable as he can be portrayed and the duo perform quite well against the villain Multiplex that crashes Barry’s party. Less so is the continuing keeping Iris in the dark. Listen, it may come off as a broken record, but this continuing to keep Iris in the dark “for her protection” is beyond patronizing and she’s even lampshading it now! That doesn’t make it better. I get wanting to pace out a reveal, but sooner rather than later would work for this one.

Carmine di Giandomenico and Ivan Plascencia continue to be a great duo on this book. There’s always a whispiness to the art, very loose and flowing, which works for a book featuring a speedster even when the style feels very different from the last few artists that graced the book. A cool scene is when they depict a giant tidal wave of Multiplexes (Multiplexs? Multiplexi?) ready to crash into Barry and Hal. It’s very well detailed, with Plascencia’s more subdued blues and purples selling the incoming danger. Speaking of the colors, while the scene in the 25th century Flash Museum doesn’t really seem all “future-ey”, design wise, but the use of a swirling color palette reflecting off the glass encasements provide that kind of vibe.

If there is one criticism of the art team, it’s on the cover. Conceptually, it’s fine; Barry and Hal running in the future, mid-change into their costumes. The problem is that Giandomenico goes really overboard with the crackle lighting surrounding the two, to the point that it really hampers the cover. If that was toned down, it would be a fine cover, but the result is kind of a mess.

All in all, “The Flash #23” comes off the heels of ‘The Button’ kind of in a weak way. It’s not a bad comic, but the premise it is setting up feels like a retread. While the artwork is real good, Williamson’s over-reliance of expositive narration hampers scenes that could be carried better through artwork alone. This reuse of Thawne has also made me question just how much breathing room the team has between now and the end of ‘Doomsday Clock’ in 2018. We got crumbs of Jay Garrick in “The Button” and that was reinforced here, but this wasn’t the powerhouse explosion to a start of a new arc that one would’ve expected. Speculation and conjecture, sure, but it was the feeling the start of this arc transmitted.

Final Verdict: 6.0- A serviceable start to an arc with some good art, still hampered by the problems the series has had since inception.