Even if it doesn’t have a deliberate focus on the eponymous character’s conflict, “The Flash” #33 offers a very good showing to add to the still strong ‘Dark Nights: Metal’ event through the start of ‘Bats out of Hell’. 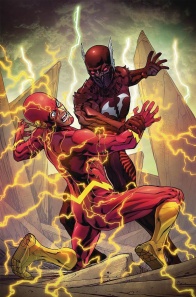 “BATS OUT OF HELL” part one! After the harrowing events of DARK NIGHTS: METAL #3, the JUSTICE LEAGUE has scattered around the world to find the only artifacts that can fight back against the invasion of the Dark Multiverse. The League thinks they know how to take back their world, but they are not prepared for who is standing in their way. The Seven Dark Knights of the Dark Multiverse. All the brilliance of Batman, but none of the morals. Barry Allen, The Fastest Man Alive, is the first to get a taste of their plan, as BATMAN: THE RED DEATH takes him on at the Fortress of Solitude.

First, let’s be clear on something: the ‘Bats out of Hell’ tie-in arc is so intricately linked with the rest of ‘Dark Nights: Metal’ it may as well be called issues 3.1 through 3.4. This is by no means a bad thing, given how excellent the arc and its tie-in issues have been thus far, but it helps put things into perspective in a similar way to how the previous ‘Gotham Resistance’ arc was effectively composed of issues 2.1 through 2.4.

After several issues of mostly concentrating on the Batman Who Laughs, Joshua Williamson’s work allows him to give a greater voice and focus to the other Dark Knights, in particular helping to expand upon the personalities and relationships of the Murder Machine and the Destroyer (or Devastator, as he is called here) with the other Dark Knights as much as the heroes. These interactions do not show a lot, but they do help define other differences that came up in the various worlds of the Dark Multiverse, such as the identity of the Flash on Earth -44, or events that happened similarly between one world and another.

One of the best parts of “The Flash” #33 is how Joshua Williamson doesn’t shy away from the horrible things happening to the normal civilians of the DC Universe. While other issues connected to superheroes or other authority figures, Barry Allen’s dash through the infested Central City shows how terrifying the Dark Knights truly are, with the Red Death’s deadly Speed Force storm nearly turning the entire city into a zombie apocalypse in terms of the general look. Others may have simply shown the civilians’ nightmarish fate, but the fact that Williamson had Barry talk directly to some of his loved ones in the chaos helps to bring the conflict down to a more human, less abstract level.

On the whole, “The Flash” #33 is mainly a prelude issue, a way to set up conflicts for later installments such as “Justice League” #32. For that reason, while the story is compelling, the solicitation isn’t exactly honest, as the real conflict with the Red Death doesn’t actually come into play until the final pages.

Howard Porter does a good job of showing the supernatural and highly advanced technological elements of the issue, with the ethereal glow of the Flash’s lightning and the Murder Machine’s Boom Tubes coming in direct contrast to Porter’s traditional hard, thick linework on faces, as if emphasizing their “normalcy” in the world on contrast to the rest. Furthermore, by interspersing images of other locations with those of Barry’s travels, Porter and Williamson give a good impression of his disconnected thought process when he’s trying to help coordinate the entire Justice League in the absence of both Batman and Superman.

A particularly interesting image was that of the Flash falling into a pit. The shattered ground shows a multitude of images from his history and possible futures, each with a potential depiction of his demise. Porter’s depictions of these scenes are clear, though the medium upon which they are apparently shown seems intentionally odd. As drawn, he helps to further demonstrate Barry Allen’s dissociation from the situation, due in no small part to the infestation of Prime Earth with the power of the Dark Multiverse.

The showing of the various “murderous Batcaves” is of interest of well. While we barely see anything, there is enough in view to give both an idea of the Dark Knights’ respective intentions for their target’s murder and an overall view of what they have available, from battlesuits and foreign missiles to Rogue weaponry to sunken ships to empty caverns fit for the Alien franchise. Without a word, Porter helps to expand upon their personalities.

Hi-Fi’s colors are very well done. While the coloration on the heroes is fairly traditional, it helps to show the unnatural conflict by way of the distracting blacks of the lightning and the muted colors on the Central City citizens. Even the bright lights emitted by the Murder Machine seem to have a darkness of their own, as if the light itself is too distracting to be comforting.

Together, Porter and Hi-Fi bring together a seemingly dystopian, if not post-apocalyptic view of the worst of what could happen to Central City with the Speed Force. The hard, thick lines of Porter mesh well with the primarily red and brown color scheme of the city itself, with the Crisis-classic red sky and Red Death symbol emblazoned upon it only further showing the crazed speedster’s takeover.

Steve Wands’ work on the lettering is phenomenal, from the unclear, seemingly poorly printed words of the captive Cyborg to the crackling, intrusive names printed out for the Murder Machine and the Devastator.

“The Flash” #33 shows that, not unlike the others issues of the ‘Metal’ event, ‘Bats out of Hell’ is well on its way to fulfilling its promise of a crazy, horrific good time.

Final Verdict: 8.0– Even though it perhaps fails to live up to some of the promises of the solicitation, ‘Bats Out of Hell’ is starting off strong.