I have a lot to thank Geoff Johns for; if it wasn’t for “Green Lantern: Rebirth,” I really don’t think I would be writing for Multiversity right now. That miniseries was what drew me back into comics after a few years away, and reignited my love of the medium in a way that has rarely happened before or since. So, when “The Flash: Rebirth” was announced, from the same creative team, I was ready to fall in love with Barry Allen, the way I had fallen back in love with Hal Jordan.

And then I actually read it. 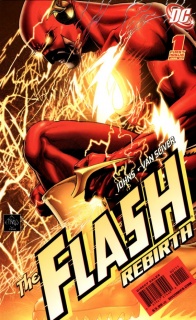 Geoff Johns and Ethan Van Sciver, the writer/artist team behind the blockbuster GREEN LANTERN: REBIRTH and THE SINESTRO CORPS WAR, create an explosive, jaw-dropping epic that reintroduces Barry Allen as The Flash in this new collection of the fast-paced 6-issue miniseries. But how will this greatest of all Flashes find his place in the 21st century?

This book picks up, more or less, directly after “Final Crisis” – Barry Allen, the Silver Age Flash, has returned from the Speed Force, and this series is the first time we’ve had a real chance to catch up with the Scarlet Speedster since his return. You would think that the opening monologue would be one of joy and thankfulness, one of second chances and the opportunities to reconnect with loved ones, or even a rundown of what life in the Speed Force was like. But, instead, Johns goes a different direction: he makes Barry a curmudgeon.

Now, I started reading comics right around the time that Barry ‘died’ in “Crisis on Infinite Earths,” and so almost all of my Barry reading was done retroactively. I’m saying that because I’m not an authority on the character, and so my opinions maybe aren’t the same as someone who had read Barry for years and years, but Johns does his best to make Barry a borderline unlikable character in the first issue of the series. I get that he is trying to give him weight and gravitas, but all he winds up doing is creating a character that comes off as the antithesis of what people want to read. There is no magnetism, no spark to his characterization. And, at lest at press time, Johns was saying that Barry Allen was his favorite all-time character. Huh?

This issue is compounded by the fact that all the other characters walk around talking about Barry like he’s the greatest thing ever, and giving the audience a million reasons to like the guy – but the person they’re describing bears little resemblance to the person on the page. To me, this seems like Johns simply forgetting that not everyone is like him – we weren’t all collecting comics pre-“Crisis,” and we aren’t all sponges of continuity. Sometimes a simple story is the best one, especially when re-introducing a character that had been gone for 20+ years.

But the story is far from simple – no less than 10 speedsters appear in these pages, and the story is circuitous by design, so for someone who isn’t familiar with, say, the Black Flash or Max Mercury, there is a ton to digest here. However, when you compare it to “Green Lantern: Rebirth,” on paper, it looks the same. That book, all about Hal Jordan, featured other Lanterns and DC characters prominently, too. The difference lies in the execution; there are steps taken in that book to establish exactly who the supporting cast is, and what their roles are. Here, there is an incredible amount of knowledge the audience is presupposed to already have in order to enjoy this book.

And maybe that’s why a New 52 was needed. Look, I am not a New 52/Dan DiDio apologist, but picking up this book for the first time in six years showed me just how inscrutable elements of the pre-“Flashpoint” universe were. And this is where the big disconnect is between Brian the fan and Brian the editor of Multiversity: I recognize that while I love the history and the minutia of continuity, sometimes that is a bad storytelling device. For people who want to get to know Barry Allen, a hero that had already returned, and didn’t need as fancy of an explanation as Hal Jordan’s (he ran out of the Speed Force – done), all that was needed was a simple tale that told the 21st century why Barry was so revered in the 20th.

Now, to be fair, the story eventually gets there. By mid-way through issue 3, we see Barry, the hero willing to sacrifice his life to save the universe, start to emerge. And from issue 3 until the end, the series feels a whole lot more like a traditional Johns reclamation job: some subtle (and meaningful) retconning, some shared moments between Barry and characters we know and love, and some hints at big things to follow.

One nice thing that Johns does or, rather, doesn’t do here is reduce the importance of Wally West. Aside from a slight dig by Hal Jordan (that West is always ‘looking to the future’), Wally is presented as a capable and noble hero. This was incredibly important, especially as people were already crying foul at the idea of ‘their’ Flash (Wally) being rendered useless because of an older version returning. This was somewhat the fear when Hal came back, rendering Kyle Rayner and (to a lesser extent) John Stewart moot, but the Lanterns have always been part of the Corps, and always worked together in some way or another. But by bringing in another Flash, alongside Jay Garrick in the JSA and Bart Allen in the Teen Titans, that seemed to suddenly crowd out Wally.

Which, of course, is what actually happened. Plans were announced for a “Flash: Speed Force” book, set to feature Wally, his kids, Max Mercury, and other speedsters, but then the New 52 happened, and here we are.

But, even despite all the issues with plotting and pacing, the biggest issue, for me, with this series was the art by Ethan Van Sciver. I think Van Sciver can do great work – see his “Green Lantern: Rebirth” books – but here, his art appears overly static, which is the one thing a Flash book can’t be. Van Sciver’s work never really suggests movement, and his characters often appear over-posed and pin-up esque. There is a finely plotted sequence between Barry and Superman, where Superman is running alongside Barry as he attempts to re-enter the Speed Force. Now, one might argue that for these two heroes, running that fast is easy, and so the relaxed faces and casual conversation they’re having can be argued as apropos. But let’s be real: Barry is trying to run INTO TIME ITSELF – he should be pushing himself as hard as he can, and Clark should be trying to keep up. But Van Sciver’s art doesn’t suggest that at all.

Throughout the book, characters run at ungodly speeds, and outside of a few panels, everyone looks like they’re on their way to the mall, not running to save their lives. Van Sciver also has lost all the humor he brought to his prior work here – there’s no hilariously larger Guy Gardner statue moments to be found. Part of that is Johns’ script isn’t nearly as light, but part of that is also Van Sciver not really looking for opportunities to do more other than his bombastic cinema inspired work. This book was famously delayed, and it sort of reads that way: each page has enough to get by, but not really anything beyond that.

You get the impression while reading this that the creators, and DC in general, were trying to catch lightning twice here: bring back the “Green Lantern: Rebirth” creative team, rinse, repeat. But that’s not the case here – everything about this feels like a poor attempt at the same magic. This feels bleak, despite being bursting with color. The twists feel predictable, the characters tired, and the action never quite up to par.

This is especially apparent in light of The Flash television program, which has introduced an entire new generation to Barry Allen, and given people reasons to fall in love with him. And, I know: Grant Gustin is really playing Wally West, with his boyish enthusiasm and insistence on being a team player – but those are qualities that are charming and fun. Barry being a cranky loner, unwilling to be happy about his reconciliation with his loved ones, well, that’s not a great look on him. By the end, we remember why we love Barry, but if I were a Wally fan picking up this book, I’d have dropped it two issues in, and mourned the loss of ‘my’ Flash.

To be fair, there’s almost no way that this book could have succeeded in the way that DC hoped it would. It was also the last gasp of the pre-“Flashpoint,” continuity heavy storytelling. Alongside of this, Johns was writing “Blackest Night,” an attempt to bring popular dead characters back into the fold through a simple storytelling device – they’re zombies! – rather than a convoluted series of events. “Brightest Day,” which followed, tried to give old characters new beginnings, and somewhat tossed aside chunks of continuity in favor of a more streamlined approach. There is a sense, while reading this, that even Johns knew that he had a tall task ahead of him.

The shame of all of this is that Barry and Wally are so different, that a world with multiple Flashes could’ve been really exciting and fun. Barry could have been the star of the solo adventures, while Wally was on the Justice League; Wally could task himself with training the next generation of speedsters, while Barry cracked down on crime, which would allow the ‘future dwelling’ Wally a satisfying role that fits his personality. Instead, we got a criminally short time for the two Flashes to run side by side, and eventually, one ran into the longboxes of our local shops, rarely to be seen again. The lessons from “The Flash: Rebirth” are many, but perhaps the most potent is this: there’s no reason to make characters more dour than need be. This was a lesson that DC, partially spearheaded by Johns, took the opposite way, and created an entire line of brooding antiheroes.

With The Flash righting that wrong every Tuesday night, it appears that the comics are just finally catching up. Can “The Flash: Rebirth” have a second life as a cautionary tale? We’ll see.