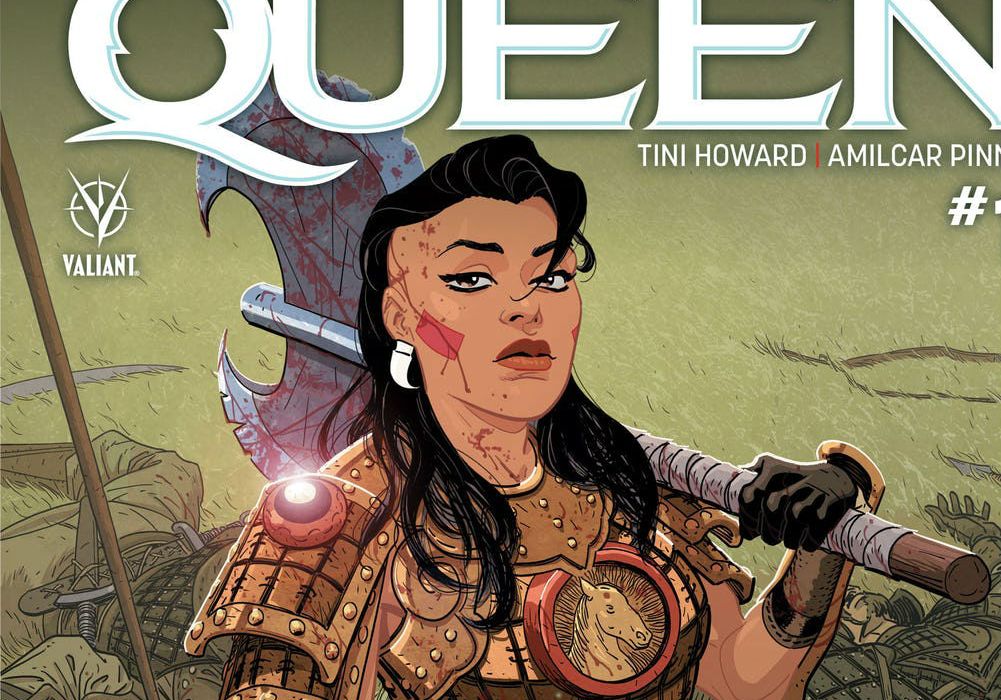 Valiant Comics may have been quieter than their relaunch these last few years, but by no means have they stopped producing quality material. The debut of this miniseries, “The Forgotten Queen”, proves that they are more than happy to provide weird, offbeat superhero stories that infuse mythology, history, and passion. Can the dynamite team of Tini Howard and Amilcar Pinna make this hybrid genre work? 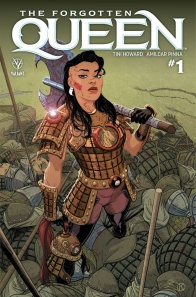 Long ago, the mighty generals of the Mongol Empire rode from Siberia to Carpathia and conquered all who stood in their way. Legends tell of a witch who walked with them, who could infect the hearts of any warriors in her midst with an unquenchable thirst for battle and bloodshed… a War-Monger. And now she is walking again.

I love Howard’s approach to making this character, Vexana the War-Monger feel truly mythical. First of all, this is a non-linear story being told from points of view across time. From that sense, we’re shown that she’s immortal, or at least lives with increased longevity. IT’s a lot of fun seeing Vexana’s influence in eras as early as Cain and Abel’s first quarrel, to the Mongol Empire. She seems to embody an aspect more than a deity, something closer to Neil Gaiman’s Endless rather than a player from a pantheon of gods, and her being owned by so many different cultures represent this best. What lends to this mythic quality the most is that the story is never told from Vexana’s perspective directly. We’re either in the present, diving with an archaeological team to find and research more about her, watching the Khans of the Mongol Empire struggle to fathom her, or simply listening to the narrator tell of her exploits through history. It’s a great way to elevate a character to a more mysterious level, and that mysticism lends a lot of believability about Vexana’s position as a mythological entity.

Even better than having this tale be about an ageless war icon? By showing that Vexana fell for a Mongol Khan, seemingly also immortal, who has now been leading the archaeological mission to find Vexana again. It’s a great way to have larger than life characters connect to the readers, having a romantic connection blossom in an unexpected situation, and once the revelation takes place, it makes reading the content that came before much more meaningful. We find out that Sarnai, the research patron, is Vexana’s long-lost love, and we see the hints to that fact much more clearly in the script. At one stage, we see Sarnai stand in the projection of Vexana’s armor, standing fiercely and looking quite at home in them. On top of that, watching her take matters into her own hands by diving below the surface to find clues of her makes much more sense given their connection. It gives Vexana, an otherwise dismissive and aloof deity, a human connection that readers can relate to and enjoy her as a character even more.

Amilcar Pinna provides art here, filling the pages with energy and movement that gives a sense of perpetual motion to the entire comic. Rarely ever will you see a character posed into a generic action figure posture or a boring camera angle, In fact, as soon as you open up the comic, we get some exaggerated underwater proportions of the archaeologists underwater, almost with a fish-eye lens effect that feels like the art is dragging you below the depths too, swimming further to discover ancient Mongol witches along with them. We get more examples of this as we move further through the comic. In the Mongol camp, when Vexana comes back with water, the Khan and his people are at first sprawled sleeping across the floor in chaotic directions. Once they come out to see the disturbance, there’s nice subtle attention to detail – there’s a row of soldier lined up behind the Khan, but they aren’t all symettrical or perfectly aligned, rather they are looking around in confusion, or leaning against each other. Similarly, as we witness the Akkadians flashback, the two nobles at their desk aren’t simply seated peacefully. They move from working away with hammers, to reaching over the table in menacing poses, before attacking each other with twisting bodies. It gives the work a feeling of unbridled kineticism – that, even if you stop to watch a panel for a minute, the art will still be pushing against you to keep moving.

Something else that Pinna uses to keep the comic interesting is filling every panel with interesting setting detail. What makes it so believable is that the extra detail is there not just to serve to script or plot, but just to make the world feel believable even in smaller moments. When the divers on the first page explore the underwater environment, it’s not all just empty ocean. We get to see the divers interact with coral and sea life, or moving through caverns with intricate floral patterns. The Mongol scenes are also a testament to Pinna’s above-and-beyond attitude. The Khan’s tent is adorned with patterned murals and even a portrait of himself for his limitless pride. Outside the tent, the camp is filled with people to give it life, and the ground is weathered by track marks and rocks. Pinna even knows when to pull back on the detail for a powerful effect. When we see Vexana contemplating her longevity, we see the detailed battles fade into generic silhouettes against blank backdrops, showing us how over time, conflicts can blend together in her memory.

The coloring is done by Pinna here, giving his art a textured, pastel feel. The opening scenes are filled with vibrancy, with Pinna bringing the ocean to vivid life using bright, crisp blues and a mix of purples and oranges for the life inhabiting it. Most of the issue takes place in the Mongol setting more than anything else, however, which Pinna gives a more muted, dusty feel. It’s not completely monotone – we see splashes of blues and royal reds on the Mongols’ armor and their interior decorations. Overall, Pinna tones down the saturation of these scenes much more, giving a heavier feeling of dread to scenes, with some building, vibrant reds to show the chaos that Vexana is building behind the scenes. It’s one of the few times I’ve seen an artist use a more muted palette without feeling totally arid and lifeless.

“The Forgotten Queen” #1 feels right at home in Valiant’s century-spanning canon, yet feels totally unique. Howard presents us with a disconnected, mystical protagonist who we only see through the eyes of others, but still manages to be subject to mortal desires. Pinna brings it all to exciting, ever-moving life, injecting even the most muted scenes with vibrancy and color. It’s a solid, standalone debut that deserves your attention.

Final Score: 8.5 – “The Forgotten Queen” gives us a genuinely mythic protagonist made relatable by human desires, with art that feels constantly full of life and in motion.