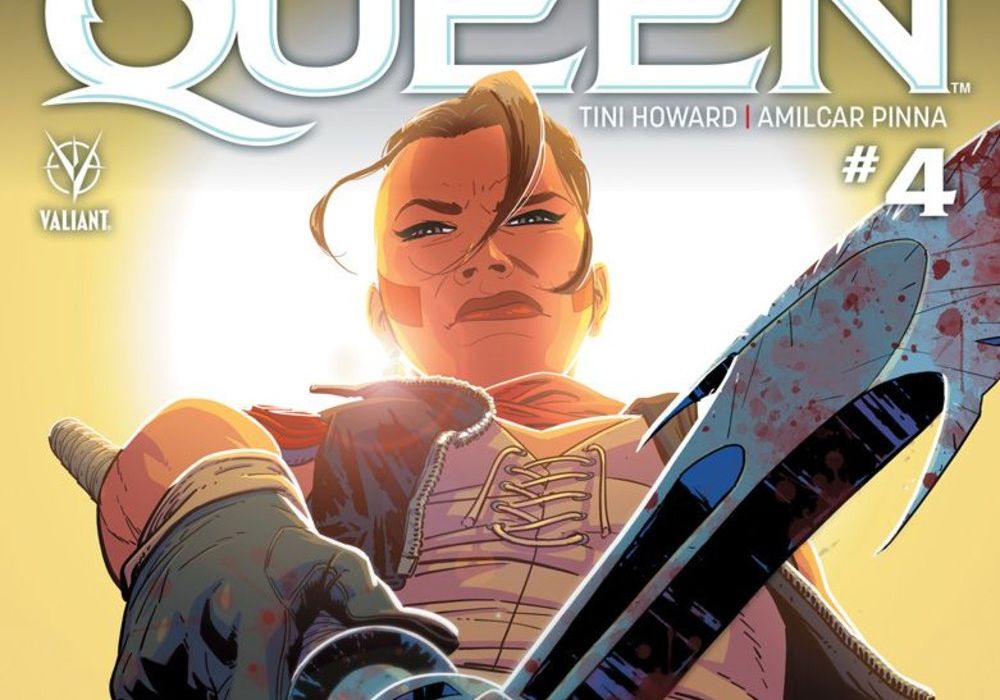 In this issue, you can’t always get what you want, but if you try sometimes you might find you get what you need. 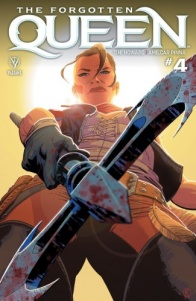 Vexana’s true origin story is revealed! How does it change the history of the Valiant Universe?

You thought you had family drama? Try being an immortal conqueror.

It wouldn’t be the final issue of writer Tini Howard (Captain American Annual) and artist Amilcar Pinna’s (Generation X) THE FORGOTTEN QUEEN without some killer action!

“The Forgotten Queen” comes to an overall satisfying conclusion as Vexana learns her secret origin. Revealing her to be a forgotten member of the Anni-Padda clan was quite the obvious tease and revelation in the previous issue, but Howard earns the retcon and uses it to add more to the story world and the character at the center of all of this. This retcon is a nice reminder Valiant can still do what they did best early on, taking the standard tropes of superhero comics and twisting them into something different and more character centric at their best.

The origin, or secret history, of Vexana feels like it could’ve been an entire issue to itself. Please check off “could’ve used one more issue” on your Valiant Bingo cards if you’re playing along. Where it is positioned in the context of “The Forgotten Queen” #4 by Howard and Pinna is largely effective for the issue. There is also the clear promise of more dramatic material and some clunkiness due to condensing it all down. Vexana’s secret origin is done in 10 pages, it could’ve been 18 and great. Where the friction comes through the most is the amount of telling without visual context. Dr. Oyuunchimeg frequently alludes to young Vexana being a bit too ruthless, which it is hinted at being either the byproduct of a learned trait from her brothers or a fated attribute meant to balance her brothers out. Either reason works and could be easily justified in the narrative Dr. Oyuunchimeg spins and “The Forgotten Queen” as a whole. However, neither of those things really appear in Pinna’s art. What does come through visually is the disregard or neglect for Vexana from her family unit, especially from her cursed brothers. Pinna does a wonderful job of isolating a young Vexana, either removing her from groups, setting her against a desolate landscape, or using her bright red toga against the crowds of white and beige. Those images make it feel like there was more room to explore young Vexana.

Visually, when paired with “Naomi” #5 there is a bit of a spectrum on how to handle these sort of narrativezed bits of secret history. As comic book pages I may have found most of Naomi’s origin story to be a bit boring, but as works of art they were engaging and told the reader her story, with the narration filling in more specific details. The page designs and paneling in this section of “The Forgotten Queen” aren’t as visual engaging when telling her story. Early on we get some nice 1/3 sized panels that figures Vexana as a shadow at the center of her brothers more well known stories. Pinna uses the scope of the panel to imply a narrative not shows segments of a scenes. Which is what we mostly get outside of those previously discussed panels and where the disconnect occurs. They all share similar motifs, but don’t come together in a pleasing way. If someone wanted to make the case the disconnected narrative is representative of the forgotten history of Vexana, there is ample room for it, but as pages of a comic book they lack the cohesion of earlier pages which makes reading them slightly annoying. These panels are mostly stitched together by Dr. Oyuunchimeg’s narration and they do an adequate job of making a reading line and getting the reader to engage with the page – something the lettering in “Naomi” #5 failed at – but also helps contribute the feeling of a disjointed page.

This sequence begins to turn around once Vexana begins to take over and remember her past once again centering everything around the miniseries visual motif of her gaze. Panels get larger, the gutter between them shrinks a smidge, and the overall page as an organizing unit is more pronounced. It does a good job of showing someone taking control of their story. It evokes the earlier memory sequences in the first two issues of the series. Colorist Ulises Arreola does a good job of balancing the energetic red of Vexana, either from the Boon or death spirits that appear to inhabit her, with natural environmental colors and soothing blues.

Revealing all of this history was just part of the plan by Dr. Oyuunchimeg, she’s there to find her and make her an offer on the part of her patrons. They think Vexana has a lot to offer their organization. As this sequence was playing out I could feel the generic formula slipping into place. This mystery group could give her back her Queen, Khutulun. And then writer Trini Howard makes a choice that subverts all those expectations and feels totally true to the character and the series as a whole. Throughout her long life, Vexana has contended with people placing her in a certain categories, calling her a “witch” and so on, telling her who she is and what she can be. When everything about Vexana is a rejection of that. Dr. Oyuunchimeg falls into that trap as well.

All of this new information gives Vexana an idea on where to go find companionship, her central quest for the entire series. That new idea leaves things on both a satisfying conclusion and excellent tease for more with “the end?” by Jeff Powell closing things out. With Tini Howard going exclusively to Marvel, a quick turnaround seems unlikely. The good thing about these kinds of comics, however, is Howard added this bit to the Valiant Universe and hopefully someone picks up that ball, runs with it, and makes it their own. I’ve never been one for “Archer & Armstrong” but some kind of Anni-Padda Sibling adventure sounds like a lot of fun now. With this, a forthcoming “Doctor Mirage” book, “Livewire,” Valiant Entertainment is doing a pretty good job diversifying their line on and off the page for the amount they publish.

Final Verdict: 7.5 – Some moments of friction aside, Tini Howard and Amilcar Pinna bring “The Forgotten Queen” to a fitting conclusion and add real depth to a previously forgettable antagonist in the Valiant Universe.