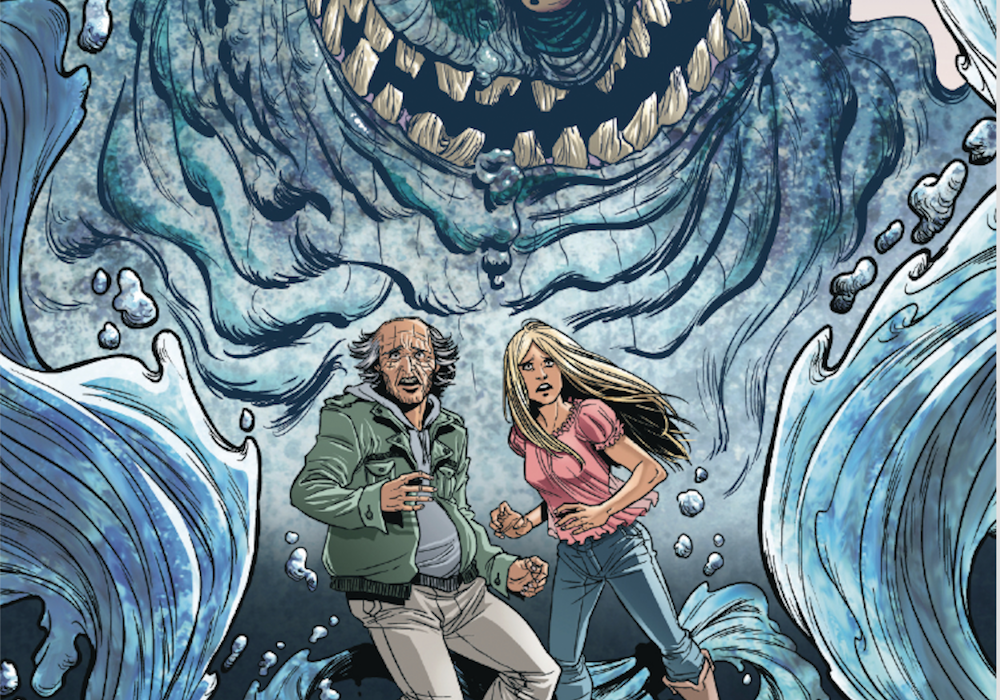 “The Girl in the Bay” #3 gives us a bit more insight into Hugh’s character and deepens the mystery: why is Kathy here? Is she really dead? Warning: spoilers ahead. 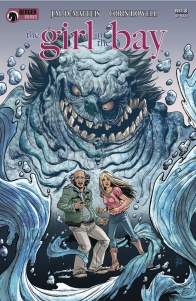 Cover by Corin Howell
Written by J. M. DeMatteis
Illustrated by Corin Howell
Colored by James Devlin
Lettered by Clem Robins
Kathy realizes that the life she remembers might not be her own-while Hugh’s gruesome companion is urging him on to murder again . . . with Kathy and another innocent soul as his primary targets.

DeMatteis and Howell are setting up the final issue of this mini to do quite a bit of revelatory work, because issue #3 provides a necessary interlude in which we learn more about Hugh, but not much else just yet to help clarify Kathy’s existential dilemma. DeMatteis has proved over many years that he’s adept at this kind of writing, so we should be in for a bit of a treat if all rolls out well.

Kathy is an interesting character, and a good choice for a crime-style comic focused on the ‘60s zeitgeist. There’s a lot of cultural baggage and karma surrounding the Summer of Love, not the least of which is the unanswered question of who, exactly, that sexual liberation was for. Kathy’s murder and her resurrection allow DeMatteis a space to play with the tropes and lessons learned from that seminal decade in the American consciousness, and he does so without losing sight of Kathy’s emotional development or her character. That’s a very hard balance to strike, and DeMatteis does it well.

“The Girl in the Bay” boasts some tight, noir-style narration and natural dialogue. Kathy’s erratic, explosive behavior doesn’t strain the boundaries of the surreal narrative she’s fighting through. We expect anyone in her position to be under a good deal of strain. DeMatteis conveys this well, and adds quite a bit of pathos to her journey by having her experience the memories of her other self as if she lived them. It’s also a nice plot call-back to her youth, in which all of her vitality didn’t keep her from feeling as if she was missing out on something. Her yearning follows her through this experience and adds drama and depth to the external action and horror. It also serves as an emotional in for the reader so we’re invested in Kathy as she tries to unravel the mystery surrounding her existence. “The Girl in the Bay” doesn’t rest easy on the initial tragedy of her death when it comes to reader engagement.

Howell’s art style suits the narrative, with animated faces and decent sequential action to help us sympathize with Kathy and keep the book ticking along. There are a few facial details that are less than coherent here and there, but overall Howell’s layouts are interesting, her cartooning competent and her character design expressive. There are a lot of location shifts to manage, the ghost-memory of a dead folk singer to animate and a mysterious goddess figure to portray – not to mention Hugh’s hideous and compelling “companion,” whose origins remain a mystery for now. There are visual clues, of course, but DeMatteis has proven over decades that his storytelling can be much deeper than the symbols on the page. For now, we can delight in the gooshy, unsettling form as it inhabits its nightmarish parental role and dwarfs Hugh at every turn.

Devlin’s color work is competent and highlights Howell’s line very nicely. There are velvety nightscapes, idyllic daytime backgrounds and dim interiors where Hugh seems overwhelmed and trapped by his grisly companion. Devlin chooses the perfect dirty-sock gray for its body and gives the creature some visceral red and yellow pops to make the nightmare come to life, as well as a more muted version of the delicate seafoam green that follows Kathy and the Green Woman. It’s also notable how Kathy’s modernized wardrobe boasts a palette that compliments the feminine colors of her previous outfit, and echoes the aesthetic of the Green Woman. As for the Green Woman herself, Howell and Devlin’s work create a beautiful, melancholy and very mysterious cosmic figure that haunts each Kathy, and possibly haunts Hugh as well. There are still a lot of answered mystical questions in this book, so it’s unclear where Hugh’s companion and the Green Woman fit in, or if they’re facets of each other designed to bring these two characters together in a horrible, time-constricted ballet.

Robins’s lettering is competent, with a nice blocky font for dialogue and a more refined font for narration that helps economize space within the panels. There’s limited styling in the balloons, which helps keep our eyes on the art and in the rhythm of the story, and Robins also goes with minimal accents and an italicized font for Hugh’s “companion” to keep visual consistency and tone. We spend more time staring at the creature and marveling at its hideousness than lingering on its dialogue for styling. The lettering blends nicely and adds a good, unstable edge to Hugh’s scenes.

The repetition of the first page of issue #1 throughout “The Girl in the Bay” thus far is an interesting trope, and if DeMatteis is playing with time in the ways he seems to be, we should be in for a good conclusion to this series. The tension remains high, and even higher given how Hugh’s upped the stakes, and I’m on board to see how this plays out at the end.

Final Verdict: 7.0 – “The Girl in the Bay” #3 is a solid, compelling entry in this 4-issue story, with good storytelling by a competent creative team, and just enough mystery to keep us reading.