Lucifer has just become the most famous convicted murderer of the modern age, and the rest of the gods are furious. It seems as though, for all their celebrity status, not all publicity is good publicity. But Luci still claims that she’s being framed, and Laura – her starstruck protégé – is too enamoured to doubt the word of the Prince(ss) of Lies. She’s determined to discover the identity of the true deific killer, even if she has to confront the entire pantheon to do it. 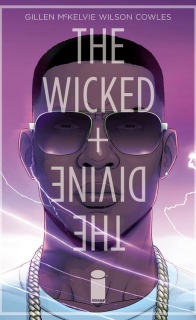 The mystery is solved. But does pop-god Lucifer like the answer? The answer is a word that rhymes with “Go”, “Blow” and “Pro”. If you think the answer rhymes with “Cow” I applaud you for your unconventional nature. It’s good to experiment. We’re experimenting with being Awesome for four issues in a row. JOIN US.

Time. Whether you think it’s linear, cyclical, or entirely relative, one thing is pretty much certain: time works very, very differently for gods than for humans. Four issues into “The Wicked + The Divine” and it feels as though Gillen and McKelvie have played some kind of chronological focus pull on their audience. We’ve been introduced to a plethora of powerful beings and witnessed the beginnings of a whodunit of biblical proportions, but – due in large part to the knowing allusions that various gods have been making in Gillen’s meticulously crafted relationships – it still feels as though fan-girl Laura is only teetering on the edge of the abyss. There’s still so much that’s been left purposefully off panel that it’s impossible not to feel like the best is yet to come, and issue #4 does nothing to dispel that emotion.

Hot on the heels of the last issue, true believer Laura (and her far from fully converted companion Cassandra) are dragged from the world of drab mortality to a house that could double as the neon-soaked peak of Mount Olympus by Baal, a character who’s equal parts Carthaginian god incarnate and lord of rap.

The issue opens with an almost full-page painting of Baal’s face (with colors by Nathan Fairbairn!), part of a mural that is clearly influenced by Kanye West’s iconic “Power” video, which is itself strongly reminiscent of any number of renaissance-era saintly frescos (shout out to McKelvie for this multilayered god/celebrity/god reference-ception). Cassandra accuses Baal of arrogance but, within the context of the book, the yearning these artist-gods have to leave a piece of themselves behind seems less like self-congratulation and more like fear of being forgotten. Baal drags Laura through a labyrinthine length of hallways that could double as a Tron light-cycle battle arena (Wilson’s knife-edge sharp colouring is as arresting as always) before presenting her to the biggest assembly of the pantheon we’ve seen in one place yet — and, most importantly, to Ananke. 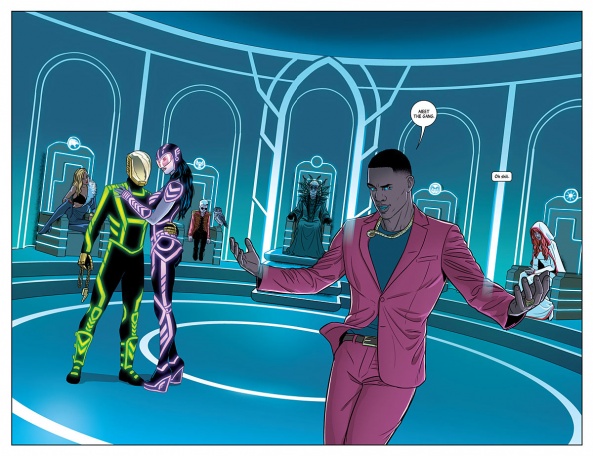 There is a brilliant disconnect in this confrontation between Ananke, unshakable and eternally old, and Laura, full of youthful exuberance and animated like we’ve never seen. Their back and forth sets out some of the main themes that have defined this book and it could be seen as the most frank conversation that Gillen has scripted so far. Luci and the rest of the God Squad may only get two years in the limelight but, if they do it right – playing just within the confines of their vaguely defined rules – they might just leave a mark on the world that will last forever. Just like ancient heroes (and modern-day musicians) they can achieve eternal life only in the Grecian sense, through the adoring memories of hordes of fans.

As she has been throughout the run so far, Luci is the focal point of issue #4. Her overexposure has tipped the balance beyond the socially accepted uses of the pantheon’s power and into something that humanity can no longer reason away. The parallels here to a Miley Cyrus level of rebellion against what is socially acceptable don’t just extend to her hairstyle; Gillen has really captured the tenuous relationship that celebrities have with their public. It seems, for a reason that has not been made clear yet, the gods need us as much as we need them.

Laura spends the majority of this issue campaigning animatedly against the pantheon’s fatalist attitude to their life; she represents that beautifully human urge to fight against a pre-prescribed destiny. McKelvie manages to convey the god/human difference with exquisite subtlety as the argument builds. Laura, full of bubbling emotion and frustration, comes across as powerless as much through her framing as through her teenage pouting. He contrasts this impotence with Ananke and the other gods, who hold themselves as though they’ve been chiseled from marble, completely in control and framed almost exclusively in low angle panels to play up their power. Even when the gods are enacting some kind of great movement (more finger clicking with explosive consequences lies ahead) they’re portrayed as languid and effortless, as inevitable as the tide or the wind. For all their youthful visages, McKelvie has done a great job of elevating them beyond the confines of their mortal vessels with delicately constructed, facial expressions and the body language of true immortals.

I will say though, for a comic about gods walking amongst us this does seem to have been so far a comic about gods talking amongst us. We’re still in the early phases of what Gillen has already confirmed is to be an on-going who’s ending is ‘years off’, but, so far, “The Wicked and The Divine” is proving to be a tantalisingly paced whodunit about gods told through the eyes of one of their fondest acolytes. It’s a testament to Gillen and McKelvie’s storytelling skills that none of the pretty preaching we’ve been subjected to feels like filler, but rather the groundwork for a series that could have some very complicated, relationship-fueled storylines in its future.

Final Verdict: 9.0 – A pop-tastic romp that crackles with more electricity than Zeus’ underwear. It’s proving to be a consistent series that shouldn’t be missed.