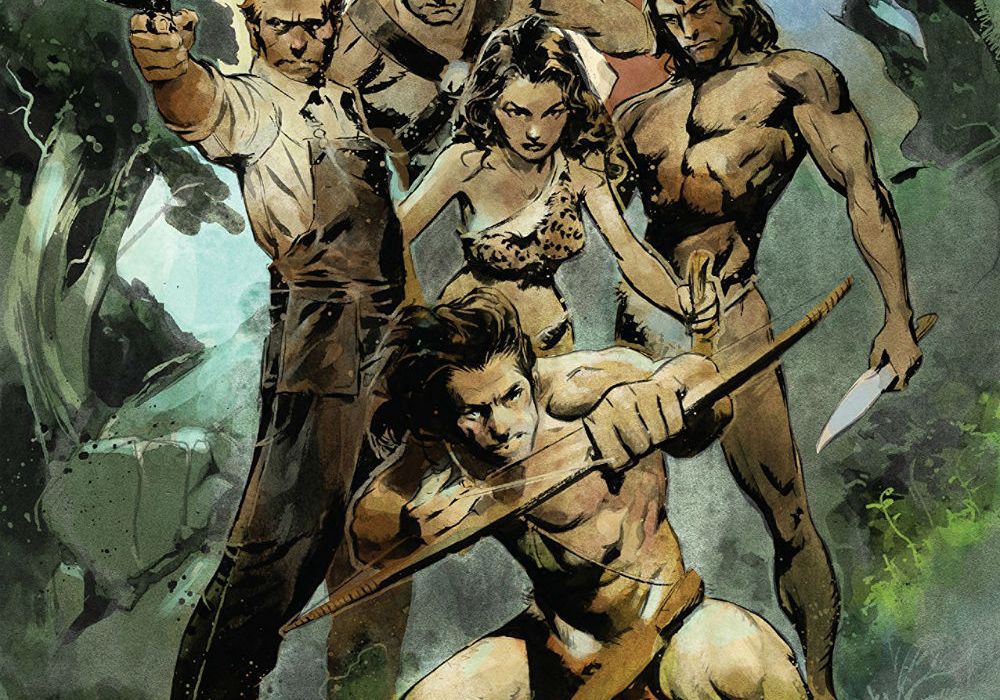 From fairy tales to early 20th Century pulp fiction, Bill Willingham has a thing for older character archetypes. In “The Greatest Adventure” #1, he brings Cezar Razek along as wingman to create a team 100 years in the making: The League of Extraordinary Burroughs-men. 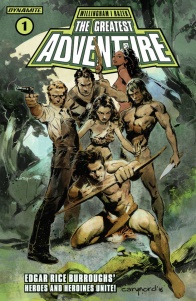 In ancient days, Jason gathered the greatest heroes of his age and set out on the ultimate sea voyage. Now, in Tarzan’s era, Jason Gridley does the same. The greatest heroes of the Edgar Rice Burroughs universe come together as the crew of the good ship Venture, with none other than Tarzan as their captain. It’s a race this time, against a battleship of dark hearted villains, and the fate of many worlds hangs in the balance.

All I know of Tarzan, I’ve accumulated through cultural osmosis. I know even less about John Carter. And the rest of these characters could be Willingham originals, albeit pulpy throwbacks. So one apology before we begin, the effect of “The Greatest Adventure” #1 as being an Edgar Rice Burroughs superteam is completely lost on me.

But I do tend to enjoy the old-timey genre excursions that Dynamite releases – the “Doc Savage: Ring of Fire” debut a couple weeks ago was a bronze-plated blast, while Parker and Shaner’s “Flash Gordon” remains a gold standard – so I thought it was due time to dip a toe into the Burroughs-verse.

Razek’s artwork has a scratchy, scuffed quality to it that almost looks like it was rubbed onto the page with charcoal. It’s got a weathered and worn feel that’s a perfect match for a storytelling mode, and subject matter, that’s pleasantly outdated. His detailing oscillates between the lushness of Tarzan’s home and the sparse, sterility of a retro-futurist spacecraft. For the most part, characters move fluidly through these settings which helps permeate “The Greatest Adventure” #1 with the appropriate atmosphere of swashbuckling fun.

The story splashes open with a stolen and flaming alien warplane careening down to the horizon as seen through a clearing of trees, leaves and vines. It perfectly captures the aesthetic you’d expect from a title like this: explosions, jungles, a propeller mounted on the nose of an alien aircraft. Willingham’s credentials are bonafide, so what’s on deck after the plane crashes into the savannah is a well-written, though underwhelming, introduction to Tarzan, Jane, the pilot Jason Gridley, and the nefarious captain of the starship Resolve.

Now most of “The Greatest Adventure” #1’s narrative thrust is delivered through flashback. Given time to convalesce at Tarzan and Jane’s home, Gridley recounts his part in a tale that leaves the Resolve traveling from the planet Karis to Earth with superior technology and ill-intent. It’s not the most original way to structure a comic, but it’s used to great effect to establish the cast, their relationships to one another, and incite them all to action, while suitably raising the stakes enough to warrant the come-together of a cadre of intrepid heroes. It’s especially effective in this context. Considering how deep Willingham is digging into the Burroughs’ bench, delivering this information as efficiently as possible is key to investing people in the plot and getting them to care about lesser-thans on the roster.

Unfortunately, someone hit the damper on the excitement level. Because outside of a few scenes – namely, Gridley attacking his captors and destroying his work with a battered length of pipe – there’s not a whole lot to get the blood-pumping. Part of that is definitely due to the level of setup required. There are lots of characters to introduce. Lots of obscure characters, too, The issue literally closes with a splash of the 18 member cast, each person captioned with a name and description underneath. So setup is a necessary mandate. But, overall, things feel like there’s a liveliness, a playing up of either the over-earnestness or absurdity, that’s missing.

As the team is thrown together, Tarzan is shown in a dapper suit and tie to welcome some known acquaintances onto the team. Immediately after, he’s stripped to loincloth for a wrestling match to test a stranger’s suitability for the team. It’s a wonderfully playful moment that’s brought to burly, bare-chested life by Rezak. There’s just not enough moments like it in “The Greatest Adventure” #1.

And for as great as Rezak’s art is when the focus is from a distance, it starts to fall apart when he pulls into close-up. His facial expressions, especially those worn by Jason Gridley, alternate between looking forced, posed, or altogether inappropriate to the emotions or reactions inferred by Willingham’s script. He’s perpetually wide-eyed, as if constantly astonished or caught by surprise. Granted that might be a tic tying back Burroughs’ characterization. But the way his mouth is rendered, it would seem all his dialogue should be delivered as a single vowel sound delivered at maximum volume and under extreme duress.

Finally, “The Greatest Adventure” #1 steers into some tricky waters regarding gender roles. Now, that’s something that will always need to be navigated when dealing with source material that’s a century old. But I’m not too sure if Willingham manoeuvres out of trouble. Jane ensures she’s part of the team, by pointing out to Tarzan that an expedition like this requires planning and provisioning of food, clothing, medical supplies, weapons, etc. So while it’s nice to see she’s given an active role on the team, as opposed to simply Tarzan’s wife and rescue-object-in-waiting, it’s hard to ignore the fact as described, her role of commissary/administrator seems awfully close to that of homemaker. This is especially evident given the conversation in question takes place while she’s making lunch for her husband and Mr. Gridley. Time will tell how this plays out, but I’m not led to believe the series is leading up to a subversion or dissection gender tropes.

In the end, we’re left with a mixed bag. The art is uneven, and the issue is a bit uneventful. There is an eye-catching moment or two that plays up the free-spirited fun of these retro-conventions, so I’m convinced Willingham and Rezak can sell the hell out of a pulpy adventure. But they’re not quite there yet. And even if they’re firing on all cylinders, I’m not sure it will ever be the greatest.

Final Verdict: 5.5 – There’s no blatant reason to drop “The Greatest Adventure”, but there’s no compelling reason to pull it either. That might be the most damning part of all.