With this sophomore issue, “The Green Lantern” gradually makes its core plot thickens, placing Hal Jordan in the middle of a mystery that is testing his stamina both as a Green Lantern, but especially as a beat cop. With a combination of the traditional tropes readers have come to expect from Grant Morrison and some of the best art Liam Sharp has made in his career, this is a book to anticipate and enjoy multiple times. 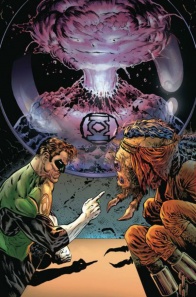 Someone is transporting a mysterious cargo out of the Great Void, and it spells trouble for the universe at large! Hal Jordan interrogates a member of the Spider Guild for answers and uses his pheremones as an interrogation tool, but can he extract the info in time?! Meanwhile, Volgar Ro makes a play for Earth while its emerald protector is off-world!

Grandiose. Complex. Impenetrable. These are some of the adjectives that are often used to describe Morrison’s past work, be it on epic sagas like ‘Final Crisis,’ or on more intimate pieces like ‘Animal Man.’ And while some of those remain true in “The Green Lantern,” Morrison seems to be building towards something larger by adding pieces and layers as the series progress.

Before descending into that controlled madness, the art by Liam Sharp should be explored under just the same scrutiny. Putting it bluntly, this might be a new career high, and that should be quite the compliment after the beautiful pages the artist produced recently, such as during his “The Brave and the Bold” mini-series. Sharp has been clear in interviews and social media that this is something of a dream project from him – a large, space opera, filled with nuances – and it becomes abundantly clear that he is not missing a single opportunity to add a level of detail and care on this issue.

First of all, his backgrounds, settings, and constructions warrant deep pauses from readers to simply take it all in, not only in one or few splash pages, but consistently throughout the piece. Take for instance a sequence upon which a large vessel approaches and is observed from a gazing window of another ship. As it gets closer, more details cab be analyzed, specific engines, curves and shapes. Not only it is a marvel to look at, it also adds a sense of depth to the page, of progression that leans closely to animation.

His character designs as just as inspired, both for new elements and for the well-known as well. His opening pages in a distant sector of space, devoid of any light, reintroduces a character fans of the Green Lantern mythos will be pleased to see, but it is Sharp’s pencils on how this character and his sector is portrayed that steal the show. Later, the same skill is used to introduce a new character with a volcanic head (yes, really), as well as adding further creepiness to a member of the Spider Guild. Smaller touches do not go unnoticed, like dots of sweat running through Hal Jordan’s face as he is clearly uncomfortable when dealing with large, humanoid spiders, or when group of villains sneer at one another, intents being revealed by body and facial language, rather than unnecessary exposition.

Colors by Oliff are a highlight of their own, especially considering the positive ordeal Sharp makes him go through. If one were to look at Sharp’s uncolored pencils and inks, it would be transparent what an intense experience for a colorist that would be. Thick lines, heavy on brushes, intense use of blacks. And yet, despite that challenge, Oliff adds further layers to the overall product that is “The Green Lantern” #2, especially in sequences set in deep space, where lightning effects, distortions and more psychedelic effects are fair game.

Back to Morrison’s ideas, plot and script. The writer had already declared that this story would be firmly told from the perspective of a police investigation, but within the setting of the cosmic landscape common to Green Lantern. This is entirely true, but it is not without the usual feeling one gets from a Morrison piece that there is far more going on than revealed at any point. Hints are spread throughout the issue (same as the debut book last month), almost as if the characters are still playing in one corner of a larger box, unaware of what is going on further away.

His dialogue walks that thin line between the intimate undecipherable and what is accessible to readers. It is hard to describe, but the feeling is that the audience is eavesdropping on conversations they should not be privy to, so their limited understanding of it is absolutely intentional. This is a book that seems stronger upon a second reading, upon a renewed round of effort, where some of the later pieces of the puzzle can be identified more clearly. By no means this is a book that takes its audience by the hand: it assumes a level of confidence and investment that, when it pays off, it pays off big.

The story moves just as quickly. If by the beginning of “The Green Lantern” #2 someone would think the end-goal is moving to the right, Morrison shows so many curve balls that not only that direction has gone to the left, but to the left down a separate dimension in a distinct space sector altogether. It once again plays to the notion that the sandbox this police drama and mystery are unfolding is much larger and richer.

Finally, his Hal Jordan is a spot-on cocky, convinced, conniving space cop, with enough frailty and concerns to make him approachable. It works remarkably well and, for a series focused on a single Green Lantern, it was a mandatory requirement to be reinforced; mission certainly accomplished.

All in all, “The Green Lantern” #2 raises stakes and expectations that were already elevated since the series was announced and when its debut issue hit. This is set to be a complex, larger-than-life, and yet personal drama and mystery. With some of the best, more detailed art in the market today, this is one of the greats.

Final Verdict : 8.9 – Mixing a multi-layered art, with details that pull audience in, and a sense of the grandeur and unexpected reveals, “The Green Lantern” is a key series to watch.