“The Handmaid’s Tale”, by author Margaret Atwood, has seen adaptations of all types – from a movie to an opera, ballet to theater, radio, and television – since its original 1985 publication. It only seems natural, then, that it has now found its way to the graphic novel format. 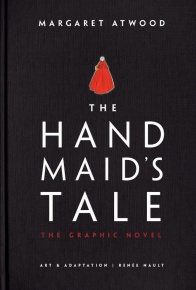 In this telling, Nault brilliantly juxtaposes a stunning combination of watercolors and delicately lined illustrations (that seem to draw their inspiration from art fashion design) with the bleak future societal setting in which women are stripped of all choices and bodily autonomy. The art gives the impression of a return to a fictitious paradise the architects of Gilead would have those of their world believe they have created while the words and thoughts of narrator Offred belie this reality.

The story, narrated first by Offred and later by a researcher, is told over fifteen chapters with unnumbered pages. All of the chapters are given simple headings and one heading in particular – the one indicating it is night – is used six times while no other heading repeats itself. While the chapters that take place at night are often the shortest, typically ringing in at one to three pages in length, they are all the more significant because they provide the only opportunity for freedom the Handmaid’s really know. It is where, in chapter fifteen, Offred (and the reader) is given a moment to hope for real freedom from the shackles of Gilead as she is led out of the Waterford home and into the unknown future.

While the writing provided by Atwood retains its brilliance, it is Nault’s extraordinary use of color throughout the story that impresses. Memories and glimpses of the outside world (particularly, with tourists to Gilead) receive a more widespread color treatment, and are dominated by soft washes of light and vibrant color. In comparison, the majority of the story is told in a considerably more limited palette of the red-white-black high contrast grouping, as well as a mossy military and night vision greens. Over and over again, pages are overrun by the red of Handmaids and the weight of the expectations surrounding the life they are commanded to bring into the world. Although life has not literally been stripped of all color in this unnamed and figuratively dark time, the lack of its use by Nault signals the loss of freedoms for the women and the despair it has plunged them into. It is a world devoid of hope.

It is also notable that the coloring is largely controlled, staying within panels and other linework where lines exist, and used to form delicately precise borderless panels in other places. However, in Chapter XIV, titled Salvaging, Nault is less restrained in her use of color. The red that dominates the otherwise bleakly white pages as a man is beaten to death by Handmaids comes to be less about the Handmaids and the uniform they are forced to wear, and more about the splatter of the man’s blood as he is brutally attacked.

The loss of individuality is also cleverly expressed. Except for the rare person of color (I noted one black woman), the society is largely white in composition. Like the Campbell Soup pop art created by Andy Warhol, Nault depicts the Handmaids throughout numerous scenes as commodities. They are neatly and symmetrically arranged, repeating and indistinguishable from one another, there to be figuratively bought for consumption by the Wives and men of the society, and discarded when they are no longer of use. There is also something to be said about the hint of military precision – and the ties that can be drawn between the military and the erasure of the individual for the purpose of creating a group that acts on behalf of the whole – in the “V” formation found in Chapter XIII, Birth Day.

Nault is also conservative in her depiction of the debauchery that is hypocritically committed by the high-ranking men of Gilead. Little nudity is portrayed throughout graphic novel, let alone during the scenes that take place at the club Jezebel’s. This is in response to how far the society moved toward conservatism, that mere makeup and skimpy outfits could be seen as so vulgar. Even in a sex scene with Nick, one that Serena Joy is aware of but not witness to, Offred and Nick are rather chastely covered up.

But perhaps what is most frightening of all about this story is how Nault tapped into the timeliness of it with regards to today’s political landscape in her depiction of women’s bodies in Chapter XII, Jezebel’s. We see not one depiction, but two, of a woman curled up in the fetal position. In one of these, the focus lies squarely on the woman’s womb. The imagery is a double-reinforcement of the message of the story and of today’s actual society inching ever closer toward making this fiction a reality. The woman is viewed as a vessel and nothing more. While words can poignantly deliver this message, seeing it so clearly makes the philosophy of Gilead (and of the world outside this fictional setting) inescapable.

The dissociation of seeing a world so frightfully run so beautifully depicted allows this adaptation to leave a lasting impression. The commentary will not find many fans among those readers who truly believe in the message of Gilead but for those who enjoyed the 1985 novel, the television show, or who are simply afraid or angered by what they’re witnessing in the news, this is a must read. For adults and teens.