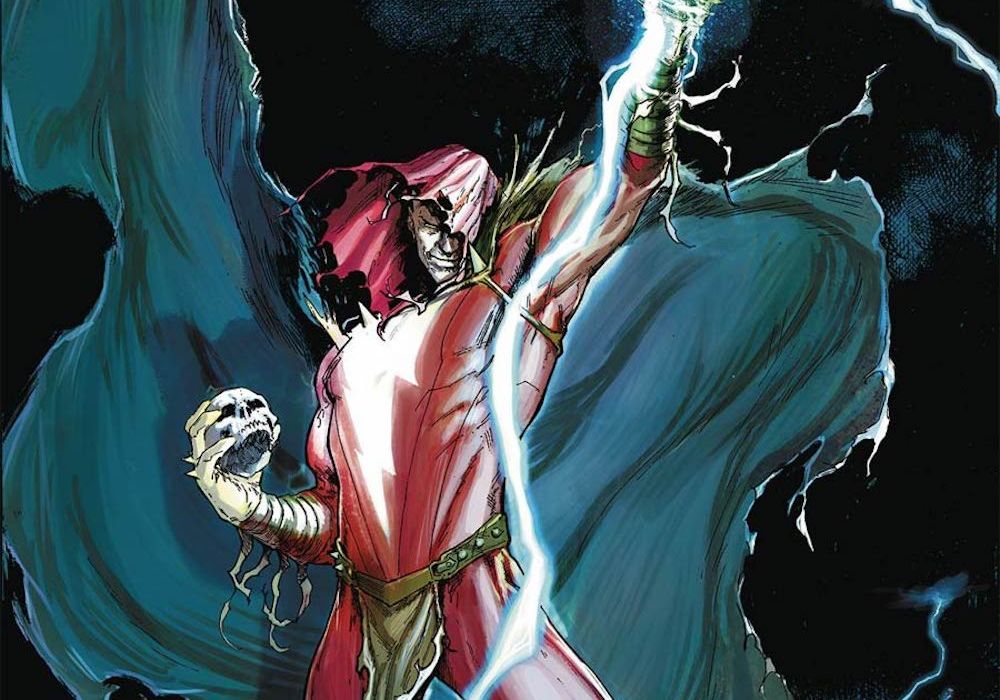 When readers look at Shazam, they likely don’t think of a horror story very often. However, with the rise of the new and infected Billy Batson, the audience is sure to fear this latest take on Earth’s Mightiest Mortal and his newest patron. 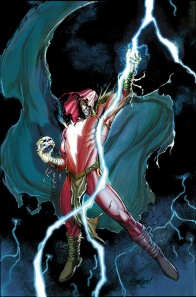 Billy Batson is a good kid. He helps his friends, loves his family, and tries to do the right thing. But Billy is about to have a run-in with the most dangerous serial killer in existence, and the Batman Who Laughs wants Billy to be bad. Spinning out of the events of Batman/Superman and “Year of the Villain,” it’s the tale of a hero whose soul has been turned black, and who has something to prove to the old guard. Buckle in for Shazam’s journey to punch a bunch of so-called “gods” in the face and show the establishment exactly what the future looks like…

What if the magical equivalent to Superman stopped being nice altogether? What if he started lashing out at the world like a more normal teenager, held together by his darkest impulses? Given the rise of the forces of doom all across Earth, would anyone in the DC Universe be able to stop him before he did something truly unforgivable, even his own family? Sina Grace does a great job of examining this type of story in “The Infected: King Shazam” #1, a one-shot story branching out from the concurrent “Batman/Superman” ‘Who Are the Secret Six?’ arc and into the wider Year of the Villain as a whole.

Rather than concentrate exclusively on Shazam’s point of view, Grace draws attention to a dual-sided narrative that comes together into a singular one over the course of the piece. On the one hand, we do have Billy Batson’s role as he steamrolls across the various pantheons in his attempt to create a new “family” of divinities worthy of his power. However, the other side has his adopted sister Mary Bromfield and her attempt to stop her brother before he does something that can’t be fixed. With this kind of plot, Grace presents more than two very different tones. Billy’s rampage has a paradoxical lightness to it, with a sizable amount of black comedy in spite of the terrible things he does to various divine beings. The story doesn’t shy away from the fact that what he is doing is not normal (and is in fact especially dark at the start with his insults to his adopted parents), but the way in which he describes various things, such as the idea that being stabbed with an infected Batarang may have given him tetanus, could almost make a reader smirk a bit. On the other hand, Mary’s quest is wrought with sorrow and tragedy as she arrives late time and again. The worry and fear are unrelenting, with her concern for her brother overriding any other kind of emotion. While the corrupt “King” may be overly brutal, she maintains her compassion and kindness in her interactions with his various victims, showcasing what the Shazam Family is supposed to be.

Speaking of “family,” there is an overall focus on the concept itself throughout “The Infected: King Shazam” #1, and what it means to different people. The corrupted Shazam sees his family as needing to be “worthy” of him, and sets out to create one of a different kind in a darker take on a superhero team more akin to a gang of bullies or crime family. He may be choosing his family much like adoption may work in his mind, but he is still doing so for all of the wrong reasons. On the other hand, Mary, both as Lady Shazam and in her civilian identity, maintains her emphasis on family being a much closer, less professional concept, one not tied exclusively to superheroics, but rather being about life even outside of those dangers. Her focus on Billy as her brother, not just her partner as a superhero, further emphasizes how she is a kind and caring person who truly wants to help purely because it is the right thing to do, rather than because she finds it fun or wants to be seen as powerful.

Grace utilizes various elements from within and without the standard Shazam cast, ranging from the gods directly associated with his powers to ones of alien pantheons. In the case of one, Ares, there is even attention given to his newer, non-villainous outlook in “Wonder Woman.” By drawing attention around to these areas, Grace is capable of examining not only Billy Batson’s place in the overall DC Universe, but also emphasizing the way in which the world itself is constantly changing as time goes on, showing knowledge of the overall state of the DC Universe rather than concentrating exclusively on any one corner.

For the last few pages, Grace dips the tale, which had come together from its disparate parts, into one of true horror. The aftereffects of this type of tale are not just in the events shown, but rather in the fact that they are in the prime continuity of the DC Universe, rather than a one-and-done elseworld tale. Rather than feeling that we had seen all that there is to see, the status of the one-shot as part of a wider story gives readers a sense of creeping dread at what could happen to make the situation even worse for heroics, and how things could possibly be made better once more.

Joe Bennett, no stranger to a wide variety of highly visceral emotional responses as shown with his continued work on “Immortal Hulk,” lends his expertise to the tale of the infected Shazam very well. While Grace’s writing can bring forth a variety of emotions on its own, it is Bennett’s work that truly solidifies palpable reactions to both tear-jerking sadness and terror-inducing madness. The sorrow on Mary’s face is held in direct reflection of the almost undead-looking Shazam who seems reminiscent of Star Wars‘s Emperor Palpatine, Thaddeus Sivana, or even the more “Green Lantern”-focused Nekron at times. Even that mystically necrotized face has a wide variety of emotional responses, showing Bennett’s ability from “Immortal Hulk” even further in how he can draw emotion, even false, from the most horrific of places.

Bennett makes effective use of panel barriers, whether it means breaking beyond them or even using the crackles of lightning moving alongside Shazam himself to create artificial ones in and of themselves. In the case of the latter, lightning bolts are used to denote ways in which Shazam is controlling reader focus, pulling them toward pieces from the past that were not shown in person yet.

Hi-Fi Design’s use of color helps to demonstrate the sheer levels of power at play in a divine struggle during the night. Dark shades of a sunless sky act in stark contrast against the blue lightning flashes, all of which is held against the deep reds and golds of the Shazam family. While there is intense horror at play, Hi-Fi Design demonstrates that it is not just any kind of horror, but one of truly divine stature.

Final Verdict: 8.5– The horror of “The Infected” ramps up considerably from the Batman Who Laughs’s earlier plots, showing what this new Secret Six can become as the wost case scenario continues on.