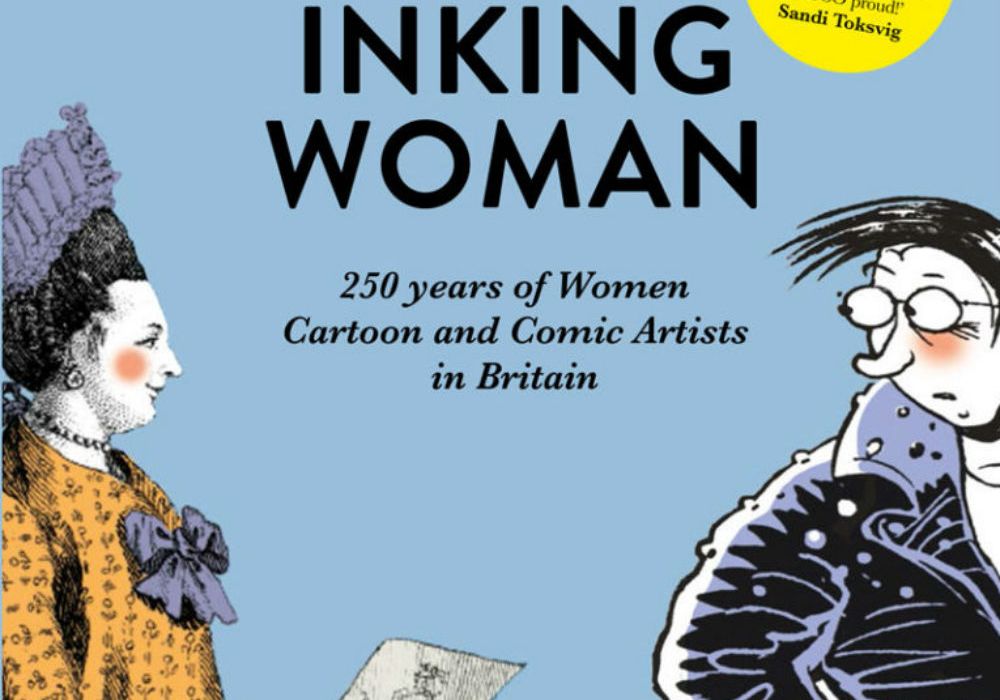 Comics can feel like a monoculture at times. They are, of course, not. Discussions of the history of comics generally centre around hypermasculine cape comics and their male creators. But there is an alternative mainstream; there have always been non-superhero comics and there have always been women cartoonists making great art. In Anglophile comics culture these creators are not always visible, with “The Inking Woman: 250 Years of Women Cartoon and Comic Artists in Britain,” editors Nicola Streeten and Cath Tate aim to rectify this by highlighting and celebrating a variety of incredible, female cartoonists. 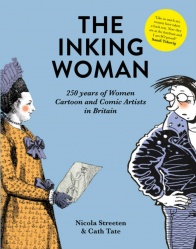 This groundbreaking picture-led celebration of the work of over 100 named British artists, and a few more anonymous ones, reveals a wealth of women’s wit and insight spanning 250 years.

Based on an exhibition of the same name, held at the Cartoon Museum in 2017, this book edited by Nicola Streeten and Cath Tate demonstrates that women have always had a wicked sense of humour and a perceptive view of the world.

For many years, the world of cartoons and comics was seen as a male preserve. The reality is that women have been drawing and publishing cartoons for longer than most people realise. In the early 1760s, Mary Darly illustrated, wrote and published the first book on caricature drawing published in England, A Book of Caricaturas. In the nineteenth century, Britain’s first comic character, Ally Sloper, was developed by the actress and cartoonist Marie Duval (1847–1890). Cartoons were used by the suffragettes, and, during the Great War, artists such as Flora White and Agnes Richardson produced light-hearted propaganda comic postcards.

From the 1920s, a few women cartoonists began to appear regularly in newspapers. The practice was for artists to sign with their surname, so most readers were unaware of the cartoonist’s gender. In 1920, Mary Tourtel created Rupert Bear for the Daily Express, and nearly a hundred years later her character is still going strong. From the 1960s, feminism inspired cartoonists to question the roles assigned to them and address subjects such as patriarchy, equal rights, sexuality and child rearing, previously unseen in cartoons. Over the last thirty years, women have come increasingly to the fore in comics, zines and particularly graphic novels.

“The Inking Woman” takes a broad scope in its highlighting of woman cartoonists. Taking examples from across different forms and styles to build up a picture of British, female cartooning. Starting with discussions of Victorian art before pivoting towards pro-Suffrage cartoons, postcards, newspaper strips and cartoons, zines and anthologies, and graphic novels. This book marries essays on the context of these forms and women’s place within that; biographies of the women working in those forms; and extracts and examples of their work.

While it is broad in its scale, “The Inking Woman” does focus in on some specific forms more than others. One of these that feels like it has a disproportionate representation in the book is postcards. This is a form of cartooning I hadn’t really considered but the editors put forward some interesting pieces. One of the editors, Cath Tate, has been producing postcards since the 1980’s. This started as a cheap way to disseminate her political photomontages, which lead to her meeting cartoonists like Kate Charlesworth, Viv Quillin and Cath Jackson. These three then worked together to produce a series of easily shareable postcards protesting Section 28 of the Local Government Act 1988, a controversial part of legislation banning schools from ‘promoting homosexuality.’

This is the use of a book like this, giving the reader specific contexts and examples of women working in the cartoon arts. For each form introduced, we are treated to a number of subsequent pages of varied examples of work, showing women’s role at the fore of their form. We’re given short bios of every creator featured in the book next to their work, giving more information about their expanded body of work. This is a starting to point to discover the work of creators you may have missed because women are not given the prominence that they could be given in this world of cartoons. In some of these bios, there are quotes from the artists describing the everyday misogyny experienced as a female cartoonist; stories of people assuming that they were men because of the quality of their work; stories of being underpaid; stories of being patronised by male editors.

On top of the artists featured, the book itself has an interesting history. “The Inking Woman” follows an exhibition of the same name at London’s Cartoon Museum. An exhibition can only last a short amount of time, so to continue celebrating British women’s important role in comics and cartooning, this book was put together. Nicola Steeten, one of the editors was a co-founder of Ladeez Do Comics, a series of workshops and forums across the UK, encouraging women to get involved in comics. LDC also recently hosted its first awards to honour contemporary work by women. This book is both forward and backward looking; highlighting overlooked work from the past, while pushing for new, innovative work from a greater diversity of creators.

“The Inking Woman” makes me wish that I had a coffee table, so I could display it in the heart of my home. It’s this big, beautiful hardcover that you could just thumb through and have brief glimpse of loads of interesting art. As well as it having quick, cutting insights that could prompt conversation. While I wouldn’t say the formatting is perfect (every now and then I found a reproduction of a strip a little hard to read), on the whole, it is a very pretty book with prestigious feel. In many ways that casual flicking seems a better way to experience this book than how I gorged on it over the last week, which left a messy blur of art work in my head where there could appreciation of individual works.

Recently, the comics community has some disheartening attacks on people of colour and women working in comics, and the history of women in the form often feels ignored. Streeten and Tate offer an antidote to that with the revealing and celebratory “The Inking Woman: 250 Years of Women Cartoon and Comic Artists in Britain.”