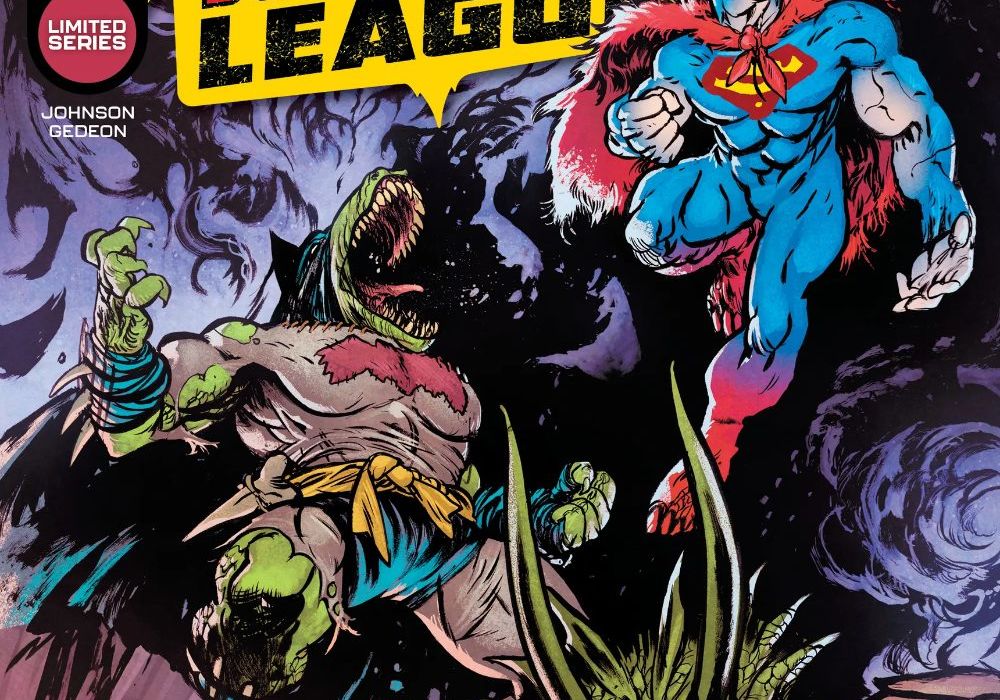 Alternate universe and “what if?” stories can be fun. What would the Justice League look like if they all had different powers? What if Superman landed in Russia instead of America? And now, Juan Gedeon, Daniel Warren Johnson, and Mike Spicer attempt to answer the age-old question: what if the Justice League members were all dinosaurs? 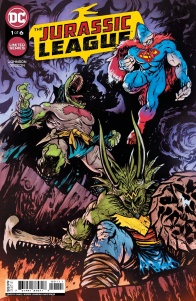 You know the story: an infant escapes the destruction of its home planet and is deposited on Earth to be raised by human parents. A goddess from a lost city defends truth. A Tyrannosaurus rex dons the visage of a bat to strike fear into evildoers’ hearts. This heroic trinity, alongside a league of other super-powered dinosaurs, join forces to save a prehistoric Earth from the sinister machinations of Darkseid. Wait…what? Okay, maybe you don’t know the story. So join us and bear witness to a brand-new-yet older than time-adventure and experience the Justice League as you have never seen them before!

“The Jurassic League” dares to take the Justice League in a bold, new, prehistoric direction. Instead of humans, they’re all assorted dinosaurs – Batman is a tyrannosaurus rex, Wonder Woman is a triceratops, and Superman is… I’m actually not entirely sure what kind of dinosaur he’s supposed to be, just a generic blue herbivore of sorts. (He has a Bizarro named “Brontozarro,” so I’m going to assume he’s some kind of bipedal brontosaurus or apatosaurus?)

Well, it’s a goofy and ridiculous concept, but you have to expect that going into the comic. So that being the case, how well does it work?

I’ll be honest, it’s hit-and-miss. It can be goofy and over the top in the best of ways at some times, while other moments fail to deliver. Are we supposed to take the dinosaur Batman (called “Bat Walker”) seriously when he learns who murdered his parents, or are they trying to play that for laughs? I have to assume it’s all meant to be goofy, given the entire concept, but those moments don’t go quite far enough to contrast the dinosaur-style absurdity with Batman’s typical brooding.

There are, suffice to say, plenty of Flintstones-style pun names, like Gotham City being Growltham City. Some, like Trimyscira for a Themyscira populated by triceratops, are quite clever. Others are just adding dinosaur-like suffixes to the end of existing names, like “Blackmantasaurus” and “Jokerzard.”

So, what about the story? Well, “The Jurassic League” #1 mostly exists as setup – we see Supersaurus’ pod crash on Earth, then we’re introduced to the dinosaur versions of several existing heroes. This gives us a few fights between super-powered dinosaurs, and a more character-driven scene with Wonderdon (the triceratops Wonder Woman) deciding to embark on her journey.

In short, this is an issue that establishes these characters and their driving motivations so we can see how they compare and differ from their main universe counterparts. And in that regard, it works perfectly fine. It establishes everything as well as any main universe comic could be expected to, with a good balance of action and exposition that still lets us get to the core of the characters.

How about the artwork? Juan Gedeon pulls double duty as co-writer and artist, and the art is… the best way I can describe it is “large and exaggerated.”

For instance, each character has absolutely bulging muscles, with large, visible veins even on the lankiest of characters. The designs aren’t always consistently proportionate, but they’re always so massive it feels like they’re about to explore. The human characters are much more reasonably proportioned, which helps the dinosaur characters stand out in comparison (yes, I know humans and dinosaurs never coexisted, but this is a comic about a tyrannosaurus Batman, it’s not aiming for historical accuracy).

There’s certainly a lot of energy about each page, with action so dynamic it can often stretch and distort the characters in motion. But the intensity and speed of each action scene comes through very clearly in the illustrations.

And aside from the characters and actions, we do get some good set pieces. There’s some great backgrounds and scenes to enjoy, and also some rather horrific moments in Jokerzard’s lair, that do get to show off Juan Gedeon’s artwork. For instance, when Bat Walker and the human child he rescued walk away from the burning base, the use of shadows cast over the characters and the fiery background set against the night sky looks great and feels like a legitimate Batman moment. This is helped by Mike Spicer’s color work, which uses a wide range of bold colors to make the characters stand out, especially by setting them up against contrasting colors in the background.

Also, Ferran Delgado deserves praise for the lettering here, with the rough and stylized designs that carry throughout the issue. Of course the design shifts based on who’s talking, but the style alone really adds to the voice and overarching feel of the comic.

In short, “The Jurassic League” #1 isn’t quite there yet; it’s still trying to find the right tone, and the dinosaur theme doesn’t translate well to every character or location they go for. There are some real standout moments, but there are just as many that don’t land.

But then, if you’re reading a comic about the Justice League as dinosaurs, you’re probably ready to just relax and enjoy the craziness, and you’ll have plenty of that. So if you go in with the right expectations, you’re still gonna have a good time.

Final Verdict: 6.2 – Not every moment of “The Jurassic League” hits just right, but if you’re here for dinosaurs and super-powered violence, you’ll get exactly what you asked for.