DC have assigned an all-star team of creators to reinvigorate and homage one of Jack Kirby’s most unique creations. Each team will be working to put Kamandi in an even more dangerous situation than the last. It’s a no-holds-barred creative slam, but can it live up to the classic Kirby run? 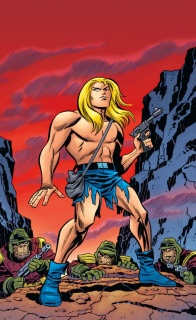 Written by Dan DiDio and Dan Abnett
Illustrated by Keith Giffen, Scott Kolins and Dale Eaglesham
Prepare to take part in one of the greatest adventures from the infinite future of the DC Universe, and join the industry’s top creative teams in a round-robin, no-holds-barred, storytelling extravaganza titled THE KAMANDI CHALLENGE!

Born from the mind of Jack “King” Kirby, the post apocalyptic Earth of Kamandi has been a fan favorite for decades, and now 14 intrepid teams of writers and artists build on this incredible foundation and take the title character on an epic quest to find his long-lost parents and travel to places seen and unseen in the DC Universe.

Each issue will end with an unimaginable cliffhanger, and it’s up to the next creative team to resolve it before creating their own. It’s a challenge worthy of “The King” himself! In this premiere issue, the Last Boy on Earth is dragged from his safe haven by a group of tigers, only to face the nightmarish threat of the ultimate weapon!

“The Kamandi Challenge” is another great addition to DC’s expansive genre list at the moment. The issue is a substantial debut with two creative teams delivering high-stakes adventuring. Both creative teams don’t compromise the Kirby campiness for the sake of modern aesthetic, which makes this series inimitable amongst the usual DC superhero fare.

Readers who were worried about how much they’ll have to know about Kamandi need not fear – this series is easily accessible from the get-go. Dan DiDio give the character pseudo reboot by throwing him into a dreamy, modern world aesthetic that quickly unravels. Fortunately, the series still respects its roots: fans of the classic run will be able recognise some familiar faces and traits while at the same time exploring fresh grounds for storytelling.
The opening story is a bombastic way to break into Kirby’s dynamic world. DiDio scripts a Kamandi true to form, whose naivety reflects that of the reader as they embark together on an adventure. The story constantly throws in other-worldly concepts to thrill and mystify the reader, and through this it’s clear to feel the enjoyment the creators surely had producing this.

DiDio gives us space-craft flying, armoured bipedal rats breaking through the sky of a virtual reality world shooting lasers every which way, and caps off the story with Kamandi trapped in an arena, neck and neck with a giant gorilla named Tiny. What’s really the icing on the cake is the cyborg, cigar smokin’ Jack Kirby wrestling armoured rats to protect Kamandi – you can’t tell me DiDio didn’t have a ball plotting that scene.

In Keith Giffen, DiDio has found a perfect artist to bring about the Kirby nostalgia. The team worked previously on “OMAC,” another Kirby property from the same creative period. Giffen evokes the expressive line work of Kirby, using the same thick, almost abstract pencilling that really brings the story to life. It’s a solid appropriation of Kirby’s art and it lends itself well to DiDio’s liberal use of high-concept sci-fi. This is well shown throughout the ‘virtual world’ introduction, from Kamandi standing against the backdrop of a burning sky, to his Grandma standing next to a crackling portal while her face rips off to reveal a robotic skull underneath.

Giffen’s expressive work lends well to the fast pacing of the story. The bounty hunter arrival scene presents some great visual ideas while consistently driving the narrative flow. We jump from armoured figures swinging from their space ship, to a heated explosion, and to Kamandi’s neighbours packing some bombastic, futuristic weaponry all in the space of three panels. However, as well established as he is, Giffen doesn’t have the same mastery of sequential story telling that Kirby did. It’s hard to adapt the style to a modern context without making the story flow jarring to the readers, but the fight scenes jump around pretty quickly without any major detailing.

Hi-Fi’s coloring serves as a great companion to Giffen’s art here, bringing a sort of cold vibrancy that is reminiscent of Kirby’s original series. The shading is subtle and soft, bringing a definite modern aesthetic to the art but without getting too much in the way of the four-color nostalgia. The coloring is most effective when the virtual reality is disrupted by the rat bounty hunters. The sudden change from normality to bat-shit crazy lasers creates a sense of urgency and familiarity for older readers, that also co-operates with DiDio’s fast paced plotting.

The art really shines when Giffen gets to work within the post-apocalyptic setting. We see Kamandi as rugged and jagged as when he was first rendered, and some great representations of Kirby’s classic design work. From the almost KKK-esque jailers, to appropriate use of the Kirby zig-zag and crackle on the environment, it really feels like an authentic comic from a great era of storytelling. Unfortunately, this sequence lasts only 3 pages, but it does both cap off a great issue debut and lead into Dan Abnett and Dale Eaglesham’s story – the high point of the issue.

This is where the story steps into the thick of it. Abnett has great control over pacing, and scripts a fight scene deserving of the series’ legacy. The brutal wrestling with Tiny the Gorilla is well choreographed, and overlapped with seeding character development for major players like Prince Tuftan. The solution to the previous story’s problem is solved in a way that feels true to the campy tone, yet is delivered in a way that feels realistic and deserving.

This story is where new readers will really grasp a sense of the scope of Kamandi’s world. Dan Abnett uses Dr Canus, Kamandi’s jailer who is somewhat sympathetic to him, to explain the story’s setting and bring readers up to pace without feeling overly expository. The world feels wondrous and new, yet lived in at the same time, staying true to the Kirby original. Abnett gives a strong sense of history to Tiger City, the main setting for Abnett and Eaglesham’s story. It’s an unapologetic analogue of the Roman Empire, true to form, but is taken seriously enough that it earns the reader’s respect. Similarly, Abnett delivers a powerful coup-de-grace by upping the stakes significantly for the issue’s cliifhanger ending. No punches are pulled as the reader is left with a genuine concern for how next issue could pan out.

Dale Eaglesham’s artwork is easily the highlight of the issue. He doesn’t try to replicate Kirby’s energetic feel, but delivers a distinctly cinematic tone instead. The previously mentioned Kamandi v Tiny match is brutal and visceral, working brilliantly with Abnett’s scripting to depict a well-paced death match. Eaglesham’s pencilling is smoother and lush, which additionally helps the flow of the fight feel natural and engaging, and work as a good contrast to Giffen’s sharper aesthetic, making sure each story feels unique in tone.

The environment of Tiger City is a great example of how to pay homage to Kirby’s designwork but update it for a modern audience. Eaglesham packs every room with complicated zigzags and futuristic sci-fi, but renders them with a smooth, detailed look that gives the world a realistic quality. Similarly, in the outside world, we’re shown a thriving jungle area, filled with tiger-people and adorned with great statues. The first shot of King Caesar’s statue really opens up the scale of the vast, surrounding environment, but the streets of Tiger City are populated enough to make it look lived in and interesting.

There are some great moments in this story that show off Eaglesham’s eye for design. The first scene with King Caesar is bold and dramatic, with Caesar’s intricate headdress embodying the grandeur of his status. The reveal of the ‘holy instrument’ is also eye-commanding, but its overall design feels decidedly bland compared to the rest of the crazy Kirby architecture, making it a little underwhelming but shocking nonetheless. Eaglesham’s style overall is wondrous and extensive, my only qualm being that it might be straying too far for some Kirby purists. The generally smoothed style of the pencils gives a much softer, modern cinematic feel, and doesn’t share the sharp edges and jet propulsion of the Giffen and Kirby’s style. However, Eaglesham pays so much respect to the King in the previously mentioned aspects of his work that it’s easy to ignore this.

This issue is more than jam packed with creative and original content to justify the cover price of $4.99. Both creative teams deliver substantial stories that are original and fun in their own right. I’m interested to see how future teams pair up to work on the character, but it’s safe “The Kamandi Challenge #1” serves as an excellent debut for the series.

Final Verdict: 8.5 – The creative challenge is brilliantly enticing to ensure readers return, and the whole package serves as a solid homage to one of comics’ most influential storytellers.