Luther’s race to find the truth behind the book takes him back to the root of it all. There’s monologuing, there’s bargaining, there’s speculation on the human condition.

And there’s punching. Lots and lots of punching. 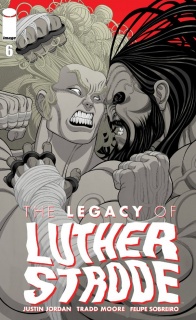 “The Legacy of Luther Strode” is a strange kind of pilgrimage of a book. Fully realised and finally comfortable in his powers, the eponymous Luther set out at the beginning of this series to track down Cain, the progenitor of ‘the Murder Cult’ by any means necessary. Following a string of increasingly deadly skirmishes with Cain’s acolytes, Luther finally faces off against the man himself in issue #6.

And boy, does it go all the way off.

As with pretty much every individual issue in this series, what happens  on the page can essentially be summed up in a single sentence: Luther runs into one of ‘the talented’, they argue, they fight, Luther emerges victorious. While that formula might sound played out, Jordan and Moore have proven themselves to be masters of controlled escalation, building both the visual spectacle and the emotional stakes from fight to fight. In “LoLS” #1, Luther faced off against ‘the twins’, a pair of foes who, while obviously deadly, he had little emotional connection to. However, across the course of this series Jordan manages to subtly and smoothly increase Luther’s personal connection to the other talented across history, through a growing distaste for the centuries of havoc they’ve wreaked. By the time we reach issue #6 and the final showdown between Luther and Cain it’s become clear that Luther needs to put a stop to the cycle of destruction that Cain (and by association tyrants in general) have set in motion.

Jordan lets the philosophical debate about man’s inherent cruelty play out over the opening few pages in a series of fantastic monologues. As is, perhaps, fitting for a man who’s been chained up alone for centuries, Cain has a lot to say, and speechifies like the seductive cult leader he is. Jordan pulls up just short of melodrama as he builds the tension before the inevitable final brawl, and Moore builds the tension with an increasingly small succession of super-close reaction panels of Petra, Delilah, and Luther, that can’t help but bring to mind a Mexican Standoff. Luther, by contrast, seems calm; focussed; centred. As a character who’s had immense power for most of his three comic-book runs, it could have been difficult to find any real meat in the conflict Luther faces. But Jordan has carved out a very real and fully realised moral journey for his muscled monk, and the result is a surprisingly nuanced conversation about the nature of one person’s potential impact on the world. we’ve followed Luther from uncertainty and reactive fighting through to a level of personal clarity that allows him to go toe-to-toe with a self-styled god. Cain and Luther clash not only as physical beings, but also as warring ideologies, giving their kicks and punches a much more satisfying emotional weight.

And speaking of their kicks and punches, Moore really solidifies why he’s the best man for the job of bringing Luther and co to the page in this issue. While there’s nothing particularly new in terms of visuals in the fight between Luther and Cain, Moore signature style is on full display, with the hyper-stylised rippling bodies and ultra-kinetic movement that he’s become known for really exploding out of every page. Given that this issue is essentially one long fight scene, it would be easy to dismiss it as so much white noise, but Moore’s precision when it comes to pacing means that Jordan’s fight-based storytelling style swings effortlessly from breathless to room-to-breathe and back again from panel to panel.

Seriously, I don’t know if there’s anyone working in comics right now who can pace a fight scene like Moore. He manages to inject a real sense of individual character into almost every move, slowing down the action at one point in this issue to focus in on Caine licking the blood off the blade of a sword Luther has just swung at his head, his eyes gleaming as he calls it ‘delicious’. That panel alone is enough to convey Cain’s arrogance and panache. While the much more monastic Luther only shows flares of emotion when Petra or Delilah are threatened.

“The Legacy of Luther Strode” #6 finishes off the series like it started, with a physical punch back by an emotional weight. Reading the back matter of this issue it’s clear that this series has been a labour of love for Jordan and Moore, and I’m impressed that their singularly violent vision managed to make it all the way from nerdy Luther discovering his Strange Talent to him entering into a showdown of biblical proportions. This book is a great example of telling a story that is at once both fast and slow, and proves that all out brawling doesn’t have to come at the expense of story.

Final Verdict: 8.1 – Luther wanted to ‘be better’, and thanks to the diligence and inventiveness of his creative team, that’s exactly what he did.