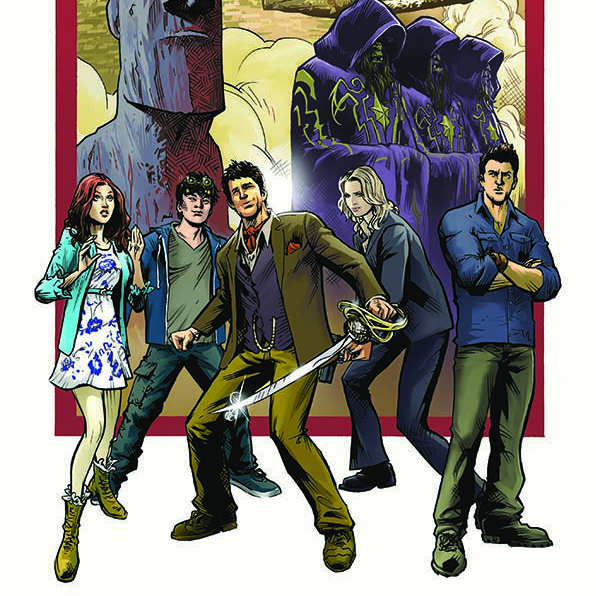 After a long, slow build up, “The Librarians” finishes on an intriguing cliffhanger. 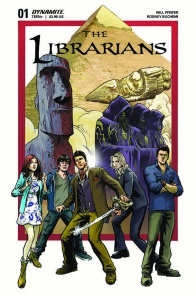 Way back in the swinging ‘70s, movie producer Sol Schick was the guy behind such cheesy classics as “Quarry: Bigfoot!,” Noah’s Ark: Found at Last!” and “Heavenly Visitors from the Hell Above.” But when he’s murdered – at a film festival! – with a piece of Noah’s Ark! – THE LIBRARIANS are drawn into the mystery. Can their combination of special skills, obsessive curiosity and knowledge of forgotten lore figure out who – or what – spelled doom for Schick? And as they delve deeper into his past, is it possible that things are not as they seem and that all his crazy, wild movies…were telling the truth?

The Librarians are a collective of incredibly intelligent, extraordinarily talented individuals with complimentary skill sets. I know this because I’m told twice.

First, on the inside front cover, above the credits, writer Will Pfeiffer (or his editor) gives us a one line bio for each member of the team. Later, as each character first appears, he gives us a cheekier, more conversational version of much the same content. For what it’s worth, the second iterations are definitely better, which not only makes the front matter redundant, but a little too salesy and even patronizing. Somebody on the publishing side wanted it to be crystal clear that these are franchise characters and not mere a collection of randos.

They have history. They’re important. The series is named after them.

These double introductions may seem like a minor annoyance, but ultimately they’re emblematic of a bigger problem that pervades the entire first issue, namely “The Librarians” tendency to tell the story rather than show it.

So, after a rather laborious start in which there’s lots and lots of talking (at the movies, no less) about how much veteran librarian Flynn Carson loves unsolved mysteries, ancient astronauts and cryptozoology, we finally jump into the action. Carson’s boyhood hero, the infamous filmmaker Solomon Schick, greets his adoring fans (Flynn Carson number one among them, in case you didn’t pick that up) only to be attacked by the former host of Sol Classics Pictures, Oscar Orville, who rushes on stage and stabs him, chuk, chuk, chuk, in front of the horrified audience.

Quickly (more or less), former NATO counter-terrorism specialist, Colonel Eve Baird, springs into action and subdues the attacker, saying, “All right, all right. That’s enough out of you.” But don’t get the wrong idea, she’s not only a professional soldier who scolds murderers with all the intensity of a first grade teacher, she’s empathetic, too. Moments later, she comforts her colleague Carson with these gentle words: “We’ve seen some intense things in our time, but watching your childhood hero get stabbed to death – that can’t be easy.”

Later, there’s a brief debate about whether the murder weapon is made of an organic material, “like some sort of cypress,” or another, more mysterious substance. Either way, much of the dialogue is clunky and wooden. Like when Carson casually says to “master of new technologies,” Ezekiel Jones, “You bootlegged cable [TV] on our 19th century pre-cathode tube difference engine?”

I guess it was either that or watch the breaking news on their smart phones (where #SolStaked is currently trending), but that’s not very steam punk.

Visually, there are some definite high points. Orville Carson’s character, in particular, is rendered with just the right amount of quirkiness to really command our attention. His thick, oversized tinted glasses seem to suggest that he’s seen some things he probably wishes he hadn’t, while his bald head and paunch underscore the fact that he’s no longer the man he once was.

The interrogation sequence, when Cassandra and Ezekiel break into Oscar’s jail cell, is also expertly drawn and laid out. Artist Rodney Buchemi and colorist Weslei Manuel make excellent use of white space, panel borders and contrasting warm and cool tones to create a captivating, montage-like sequence that hints at this series’ potential. Too much of the time, however, throughout big chunks of this debut issue, one panel after another is drawn with a low angle looking up at particular character’s – or group of characters’ – shocked and bewildered expressions. It’s almost like they’re competing to show who is more blown away. A strange dynamic, indeed, for a group of people who’ve seen The Loch Ness Monster and Big Foot in person and can teleport from place to place. Maybe it’s an over-correction designed to show, rather than tell. Either way, the very same notes are played a little too frequently and consistently.

Final Verdict: 6.6 – This exposition-heavy debut issue ends just as things seem to get started. If subsequent issues can trust the audience to fill in the blanks – and back off overt story telling – there’s a lot of fun to be had.